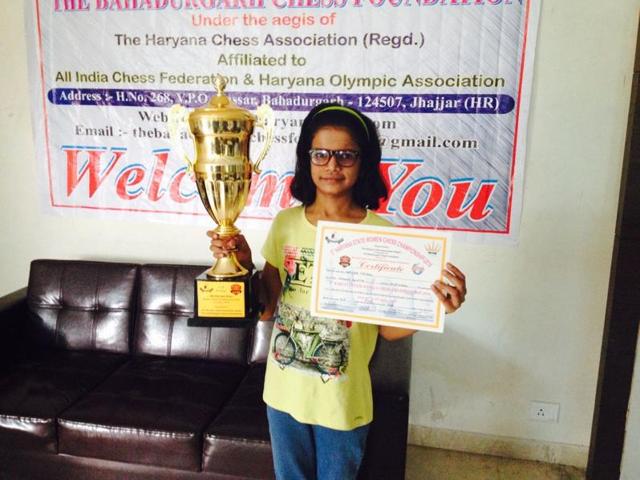 Twelve-year-old Navya Tayal from Gurgaon is in the news this week for defeating contenders three times her age to clinch Haryana’s state Women’s Chess Champion title. This child prodigy, moved further up in the ranks of fantastic female chess players after winning the district championship three years ago.

She has been playing chess since she was four, (the age when some of us who shall remain unnamed could barely manage to stop stabbing guests with sharp cutlery) and intends to compete with female chess players nationwide, at the National Woman Challenger, later this year.

Tayal reportedly dreams of being a Woman Grandmaster like many other women, who understand that this title would ensure they are recognised by the World Chess Federation. The most illustrious title a chess player can hold is that of a Grandmaster which can be won by either men or women but only a handful of women have won it.

Popular chess players such as Nigel Short have blamed this imbalance on an inherent biological disadvantage since,“Men have brains which are 10 percent larger. They also have considerably more gray matter. Women have very, very much more white matter.” He further went on to say that it “would be wonderful to see more girls playing chess, and at a higher level, but rather than fretting about inequality, perhaps we should just gracefully accept it as a fact.” Yes, even a mind sport that requires the players to remain seated and outmanoeuvre the contender with carefully planned strategies is not spared of gender-based discrimination.

While we have Short ‘sciencing’  chess to us, Judith Polgar (who has defeated Short before and has held the record for being the world’s youngest Grandmaster at 15. She chose not to ever compete in the women’s world championship) has made it clear that women can be the best in the world at chess, and the competitions just need a much deeper pool of players. She said, “Yes, I am so far exceptional, but I don’t think I will be the only one in the upcoming decades.”

But this is not to say that India doesn’t have female chess players with mean moves. Here is a list of 4 female Grandmasters from India. 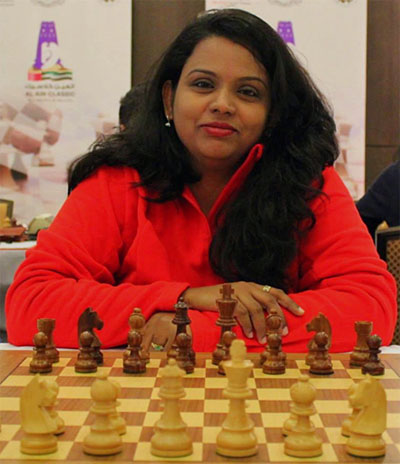 Subbraman Vijaylakshmi in August 2000, made history by becoming the first woman from India to win the title of International Master and Woman Grandmaster, giving little girls across the country an idol, apart from the eternal Vishwanathan Anand. She has also won more titles than any other Indian player in the Chess Olympiads. The titles/reputation/gender of her opponent is immaterial to her she says as she sits at the chequered board; “This is the only game in which you have to compete with men to be among the world’s best. Beating them is not impossible.” 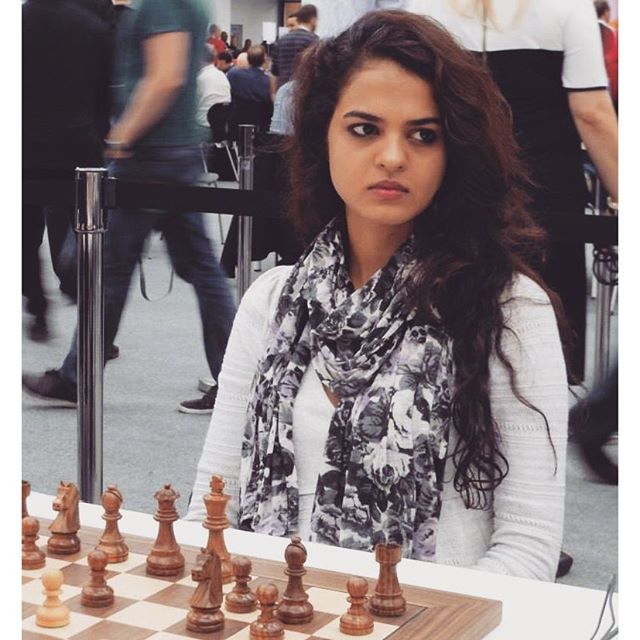 In 1991 her mother introduced Tania, now an Arjuna awardee, to chess at the age of 6. She won her first international tournament at the age of 8 (it is no strange coincidence that child prodigy and chess have the same first syllable). Seven years later, she added the titles of International Master and Woman Grandmaster to her achievements. Sachdev is a rare chess celebrity and bagged great endorsements deals with RedBull & Swarkovski. Here she is interviewing Vishy Anand. 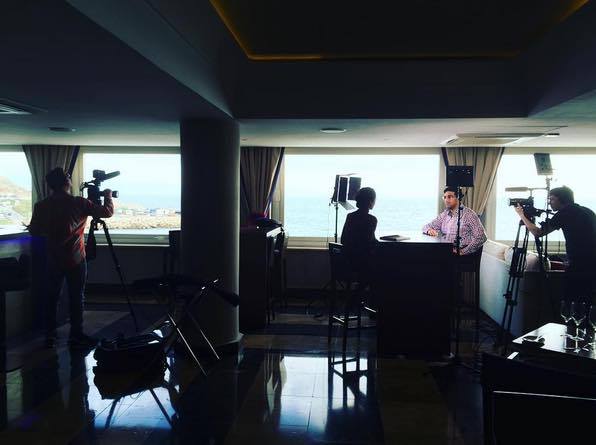 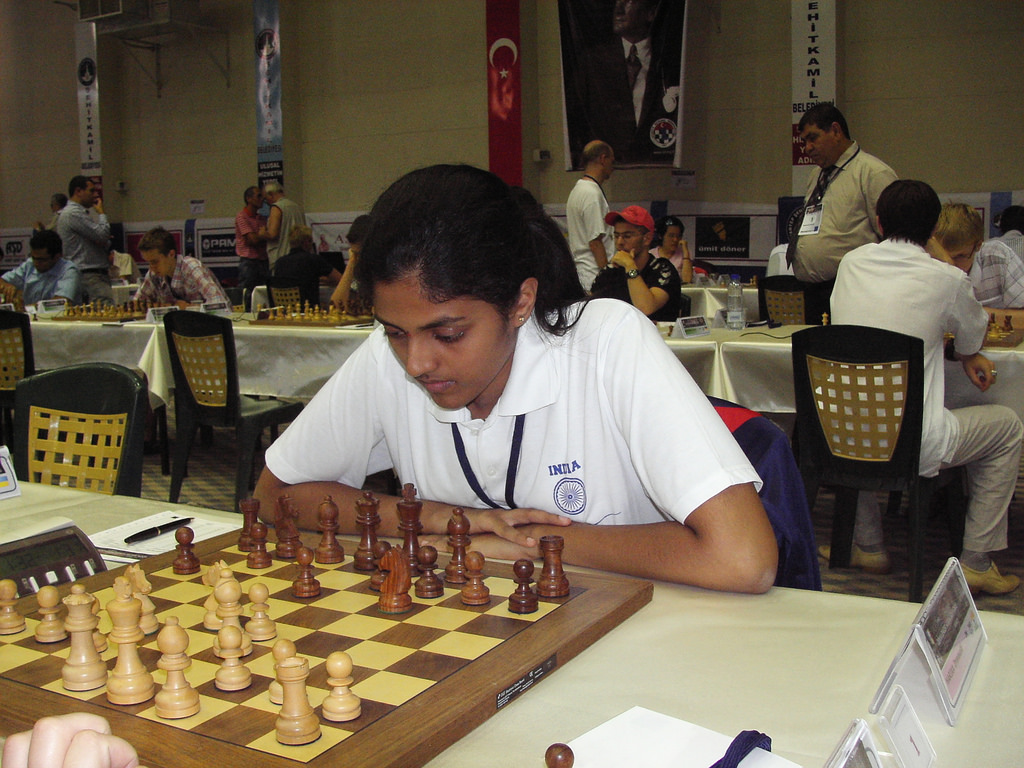 Dronavalli Harika, followed the footsteps of Koneru Humpy to become the second Indian woman to win the title Grandmaster in 2011. When she was 16, she was recognised as the Women’s World Chess Champion at the Commonwealth games in 2007. Media houses are touting her as the next poster girl for chess; she won the Popular Choice Award (Chess) at the Times of India sports awards. 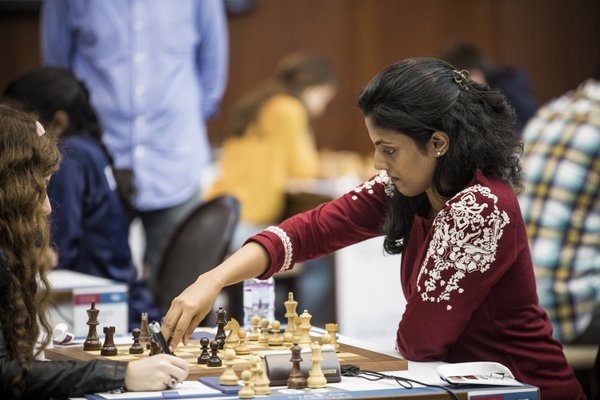 She is reported to have taken her first vacation in 2015 after joining the National Chess Team at 13. We were tickled to see Harika tweet this female friendshippy photo: “With my strongest competitor over the board on her special day 🙂 @ Koneru Humpy’s wedding reception.” 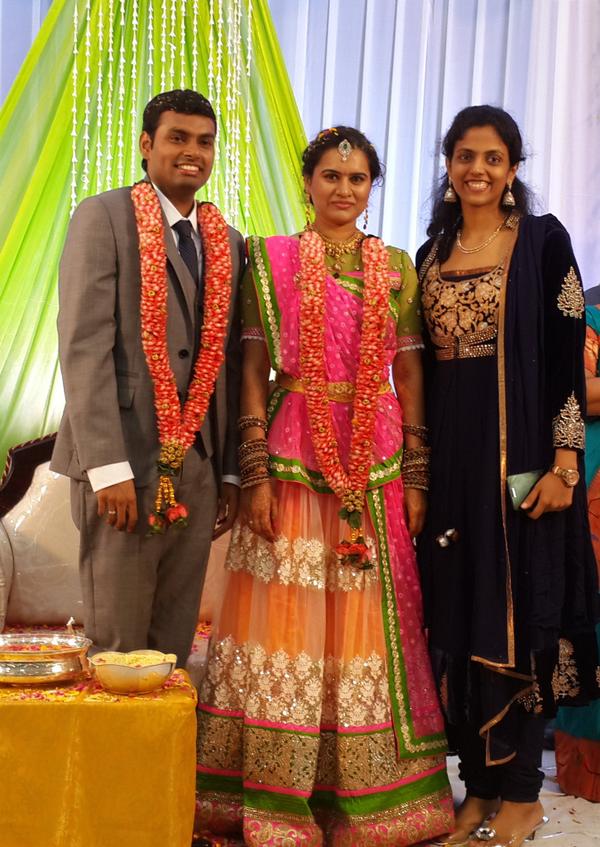 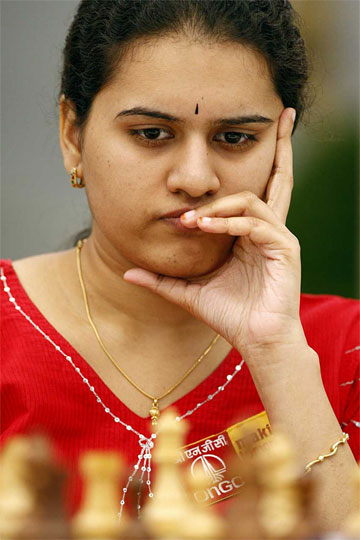 Humpy, a Padmashree awardee is ranked 2 worldwide among women in chess by World Chess Federation.In 2007, aged 15, she became the youngest woman in the world to win the International Master title. She grew up watching her father, who is a Chemistry lecturer, win championships and was inspired to start playing at the tender age of 5. He gave up his job to dedicate more time training her, after he observed her extraordinary skills in the sport. Humpy is of the opinion that women’s only chess events are important because, “they will encourage more girls to play chess.”

Her Twitter profile says: Chess player, Grandmaster, also have a normal life beyond the sixty four squares. But she has tweeted four times in her life. A move to imitate?