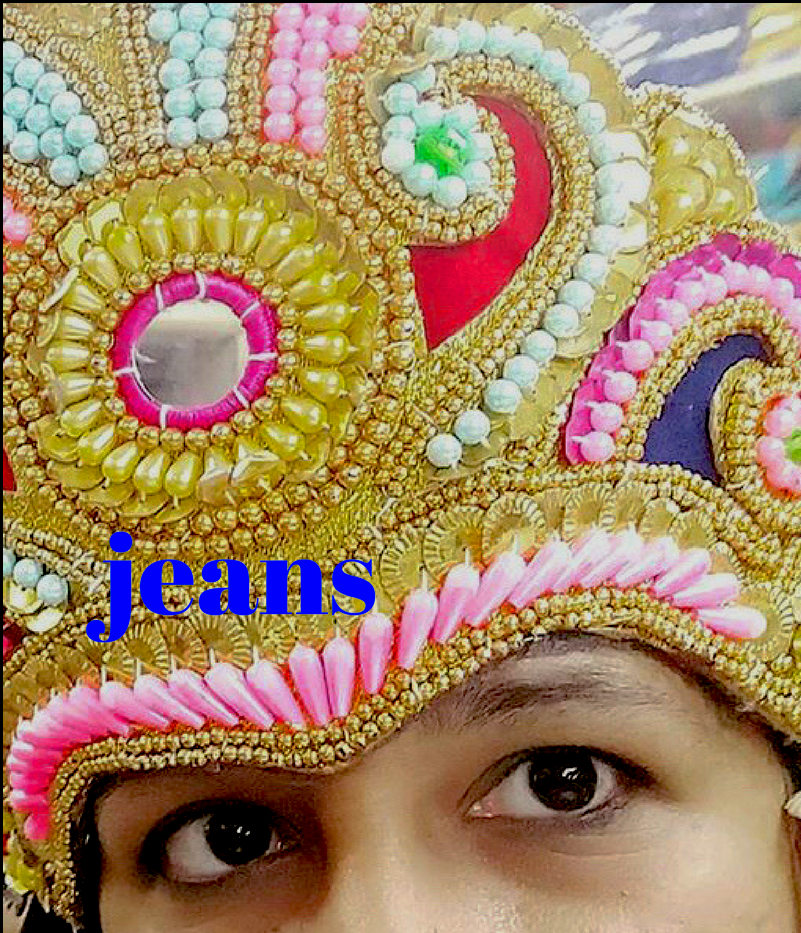 Our big fundraiser party is tonight, dost, and you won’t be surprised to hear that our texts are looking a bit like this 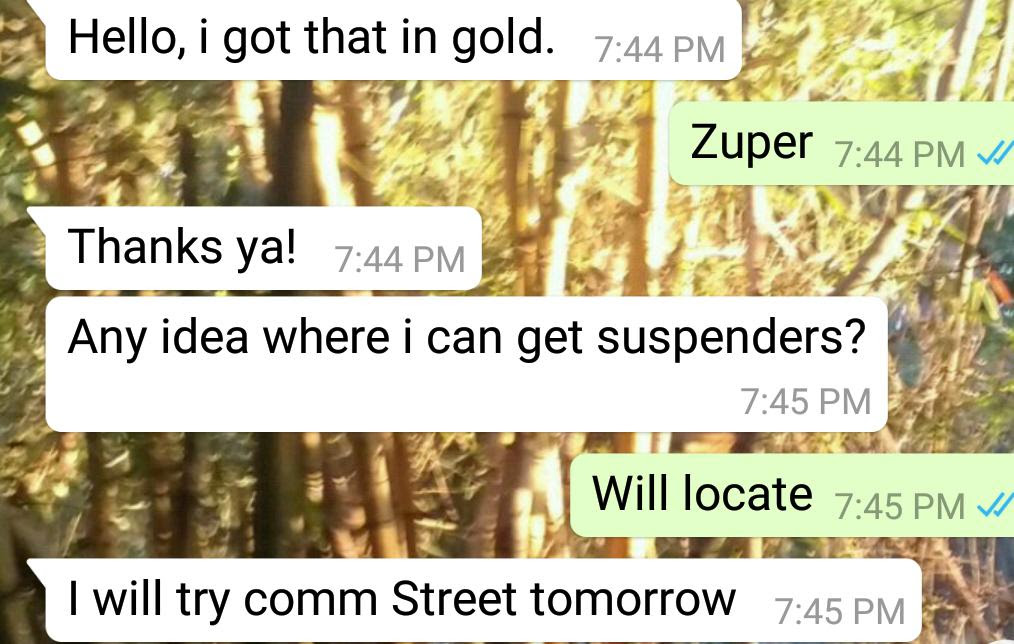 But do not fear our permaglitter gaal and fake eyelashes, please come to the party anyway. 🙂

Now one person we wish we could persuade to the party is the super cute Gowri Savithri, transgender model from Kerala. This week she has brought dhak-dhak to Malayali sari shopping hearts as she appeared in this really excellent billboard (full props to brand and copy-writer). 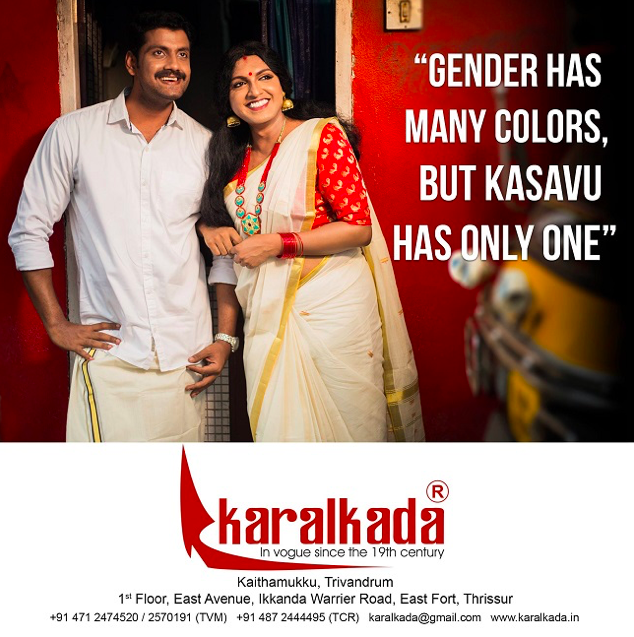 Meanwhile in the world outside of sequins and zari, one of our friends was thrilled to spot this wonderful calendar featuring Indian women in science. Of course, it was made by Aashima Dogra and Nandita Jayaraj of Life of Science fame. (See you this evening, Nandita!) 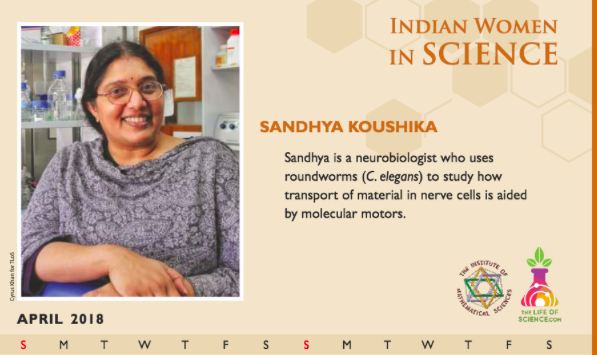 Talking of what happens when you actually do have women in science, here is a story about some crucial insights into sexual desire from the brilliant clinical sex therapist Rosemary Basson. The big shift Basson has created in our understanding is to show that sexual response does not happen only in the Hollywood bang-door-open-slam-head-into-wall-have-sex-standing-up school of fucking. Basson’s image explains that “sex was cyclical: desire often comes in response to something else, like a touch or an erotic conversation. If the sex is good, even the flickering memory of it could become motivation for more sex later on. (Sex never ends, basically.) Finally, encounters don’t have to end with a mutual orgasm. They end with satisfaction.” 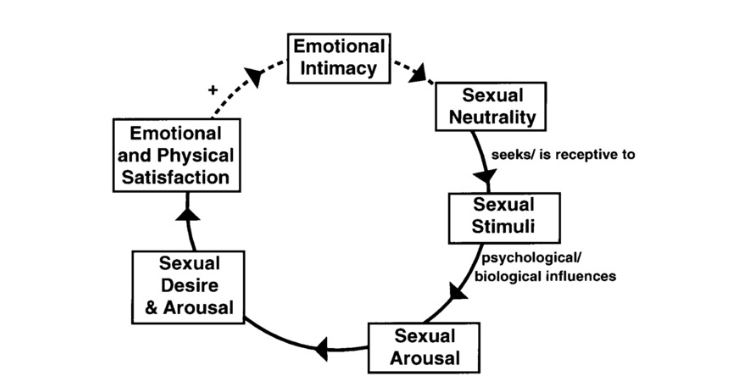 Oh yes, satisfaction. And hahaha to the idea of spontaneous combustion of desire.

Italian philosopher Gloria Origgi informed us, in this insightful and informative essay in Aeon, that the information age is over, and we are now on the brink of the “reputation age”. Meaning that we now have so much information accessible at our fingertips that the real power lies in being able to sort through this massive pile of info reliably. It makes sense: when you hear alarming stories of shockingly proficient Photoshoppers, deepfakes and AI porn, or watch that creepy, manufactured, utterly false video of Barack Obama “speaking”, you feel like you can’t trust your own eyes, and have to fall back on the reputations of those who share the info for proof of veracity.

For instance, this week we were wondering if this screenshot which is making the rounds on Whatsapp was really a typo in Times of India or just someone’s photoshopped wishful thinking: 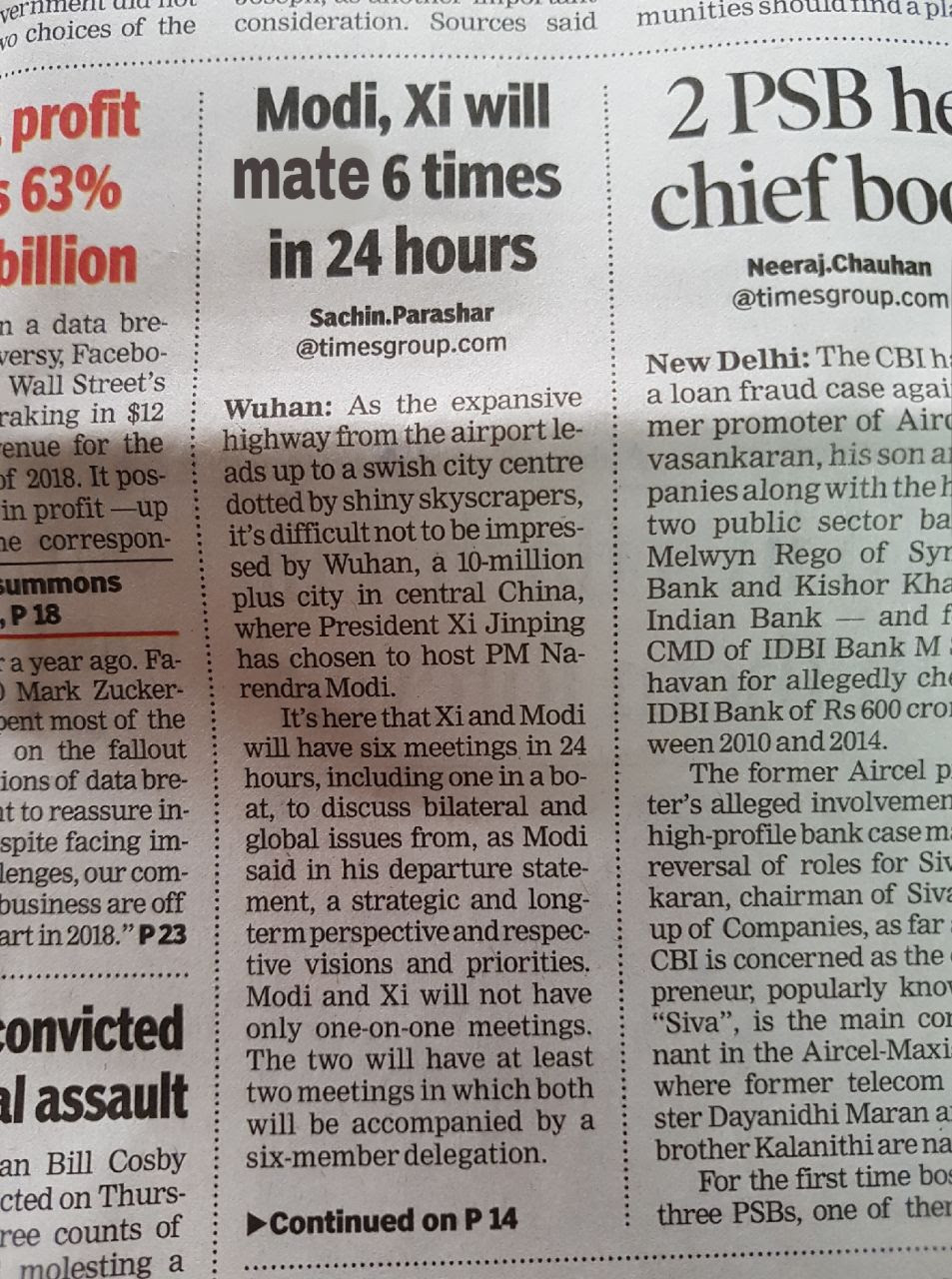 In the age of the internet, it’s understandable to feel like you can’t trust youreyes, but where do you go when you feel you can’t trust science either? This week, we all lost a little faith in the hallowed neutrality of science and got a little reality check on how it continues to be dominated by the standards and desires of white folks. The International Association of Athletics Federations decided to make a move that’s so shockingly racist, media organisations around the world have been calling it out in those many words quite baldly, pointing out how it’s designed to attack South African star athlete and real living marvel Caster Semenya, and other runners from the global South who have conventionally excelled at these events. The Guardian reports that the IAAF made a surprise announcement that women with testosterone levels above a certain limit would not be allowed to take part in 3 specific events. They made this announcement on the basis of a study that pointed out the negligible advantage that higher testosterone levels provide women in five sports. The IAAF has only put this new regulation in place for the bottom three sports named in the study, all of which were running events that Semenya excels at, and have not changed the rules for the two sports, hammer throw and pole vault, that the same study actually said were most influenced by increased testosterone levels. This is, as many media outlets have said, clearly an attack on the amazing Caster Semenya, who famously made a white British woman athlete cry because she came sixth (meaning she wouldn’t have won a medal even if Caster hadn’t run that race, but okay, boo hoo). Our favourite athlete Dutee Chand (now off this particular hook thanks to the IAAF’s random announcement) has offered Caster Semenya her legal team for help.

Closer home, the Ministry of Health has been trying unsuccessfully to tell us what women should look like, and ended up being casteist, sexist and stupid at the same time. They posted (and quickly deleted) this tweet: 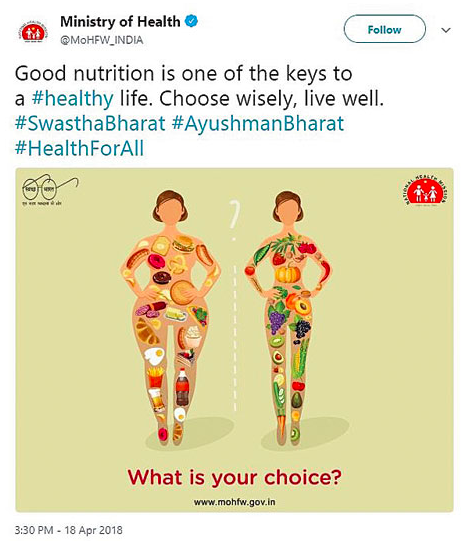 Which of course inspired TLF’s own Jugal Mody to create this cool and much more palatable version: 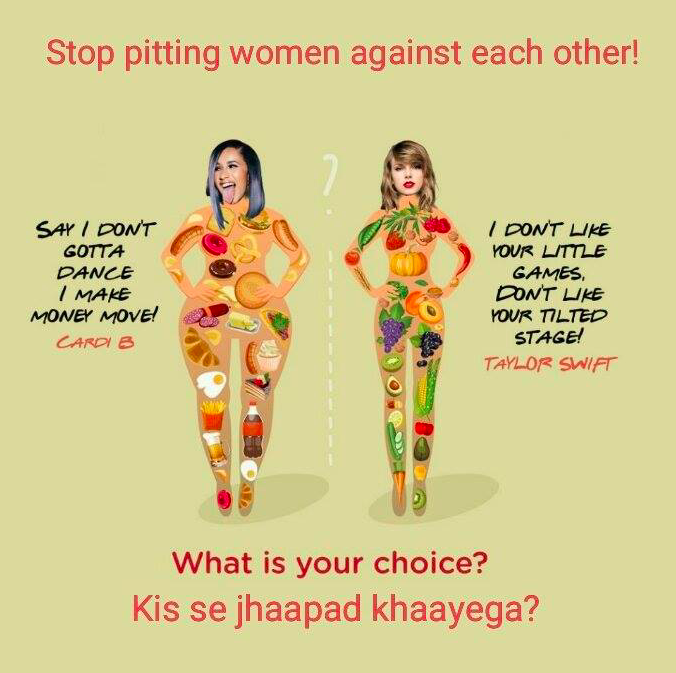 And talking of corrections. We spotted corrigendum featuring Naomi Wolf, author of everything from Beauty Myth to Promiscuities. What a blast from the past. That was so long before we ever imagined Monica Lewinsky would survive what she recently called the House of Gaslight and live to tell her tale bravely.

Speaking of bravery, the six remaining witnesses of the nine who volunteered to testify against rapist and self-styled godman Asaram Bapu must be more relieved than they’ve been in years, now that the Bapu’s been convicted of raping a minor. At least now they hopefully don’t have to worry about “mysteriously” dropping dead like the three other witnesses in the case.

And on that note, we’re also now reading cool reports of how several of Bill Cosby’s victims finally testified against him, with enervating and joyful lineslike “after the trial concluded, Constand left through a side door in the courtroom, walking into a hallway with her arms around two women and a huge smile on her face.” In the first celebrity sexual assault trial after the #MeToo movement kicked off in October last year, Bill Cosby, once apparently considered the second most beloved man on the planet after the Pope because of his lovable on-screen persona, has been found guilty of three counts of aggravated, indecent assault.

The effort to bring men who have abused their power in the academic spaces in India continues slowly and with some twists and turns. This week LOSHA supporters were accused of adding names without permission to a petition asking that the Infosys prize be taken away from academic Lawrence Liang. The creators of the petition contested this accusation arguing that it was not in their interest to do something so daft. Also this week, Christine Marrewa Karwoski, American academic and the complainant in the Mahmood Farooqui case, revealed her identity and spoke at length about the legal system, the need for formal justice and life after filing an FIR against a man she was fond of, in a stirring interview with feminist publisher Urvashi Butalia.

Given these events in our lives, the essay Erotics of Mentorship makes especially complicated reading. Marta Figlerowicz and Ayesha Ramachandran argue that students and teachers have felt a ‘visceral thrill’ in their relationship from time immemorial, and we should not pretend that this doesn’t exist. Instead what we need, they say, is a way “to support a student’s as yet fluid, and often unselfconscious, identifications and projections without causing these explorations to be manipulated and exploited, or shamed.” 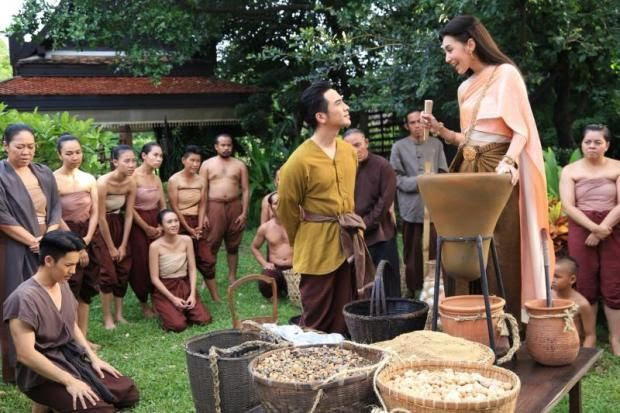 A week or two ago saw the end of Thailand’s hot fav soap opera Buppaesannivas, aka Love Destiny. Buppaesannivas apparently is a rom-com that tells the story of a good-natured archaeologist who is reborn in the body of a murderous woman in the reign of King Narai the Great, who lived from 1632 to 1688. Since the show started airing in February, tourism to related sites has massively multiplied, and Thais have taken to visiting these spots in full ancient Thai regalia. All of this has pleased not just couch potatoes but nationalists and royalists in Thailand tremendously, phoo. We’d like to recommend funding a show in which an evil woman from the 17th century lands in modern-day Thailand. *cackle cackle*

Across the Gulf of Thailand in neighbouring Indonesia, we hear that polls have determined that economist and Finance Minister Sri Mulyani is the most vocal woman in the country today. We imagine that anytime someone in Indonesia says where are the women, dudes point to Sri Mulyani, in  a way that is familiar to us. But Indonesia is a complex and fascinating country which Indians would benefit from paying attention to (instead of China), as author Pallavi Aiyar has argued. We were thrilled to discover Magdalene, an bilingual feminist online magazine founded in September 2013 (just a few months after us!) Magdalene, an indie outfit, covers everything from the financial situation of LGBT folks to Indonesian beauty pageants’ obsession with height to what Indonesia’s religious majority Muslims can do to protect minorities. 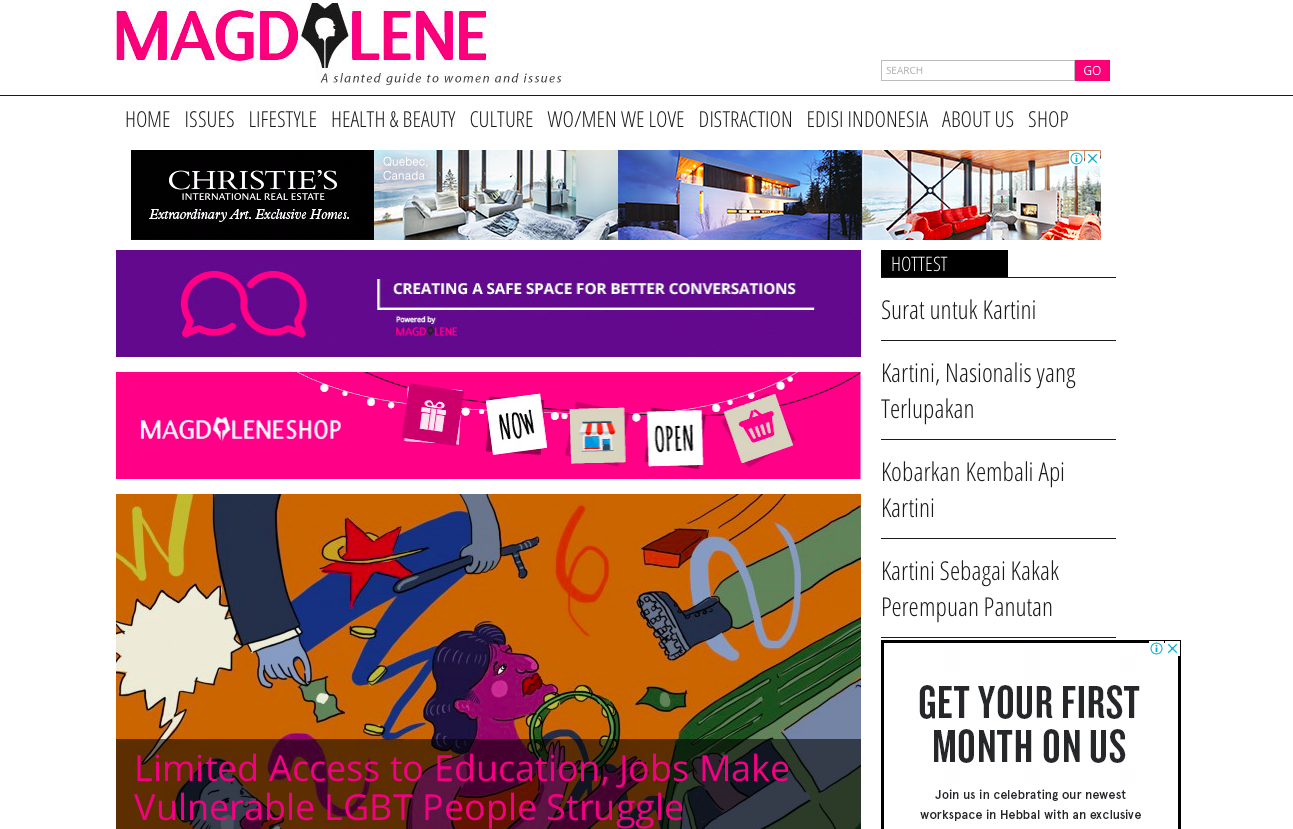 And finally, here is a bizarre story involving two women from UP, with a happy enough ending (so far). This week, two women got married at a mass wedding, with one woman dressing up as a groom (and procuring an Aadhaar card with the name Karan Shukla). The women’s parents found out about the ruse a few days after the marriage, thanks to pictures on social media and some nosy neighbours, which led to a physical altercation between the women and their families, that ended with one woman threatening to jump off the roof. The local police were called in after the “bride’s” parents made some small noises alleging cheating, but since neither family finally ended up making an official complaint, the women are currently living together, because there’s nothing stopping them from doing that.