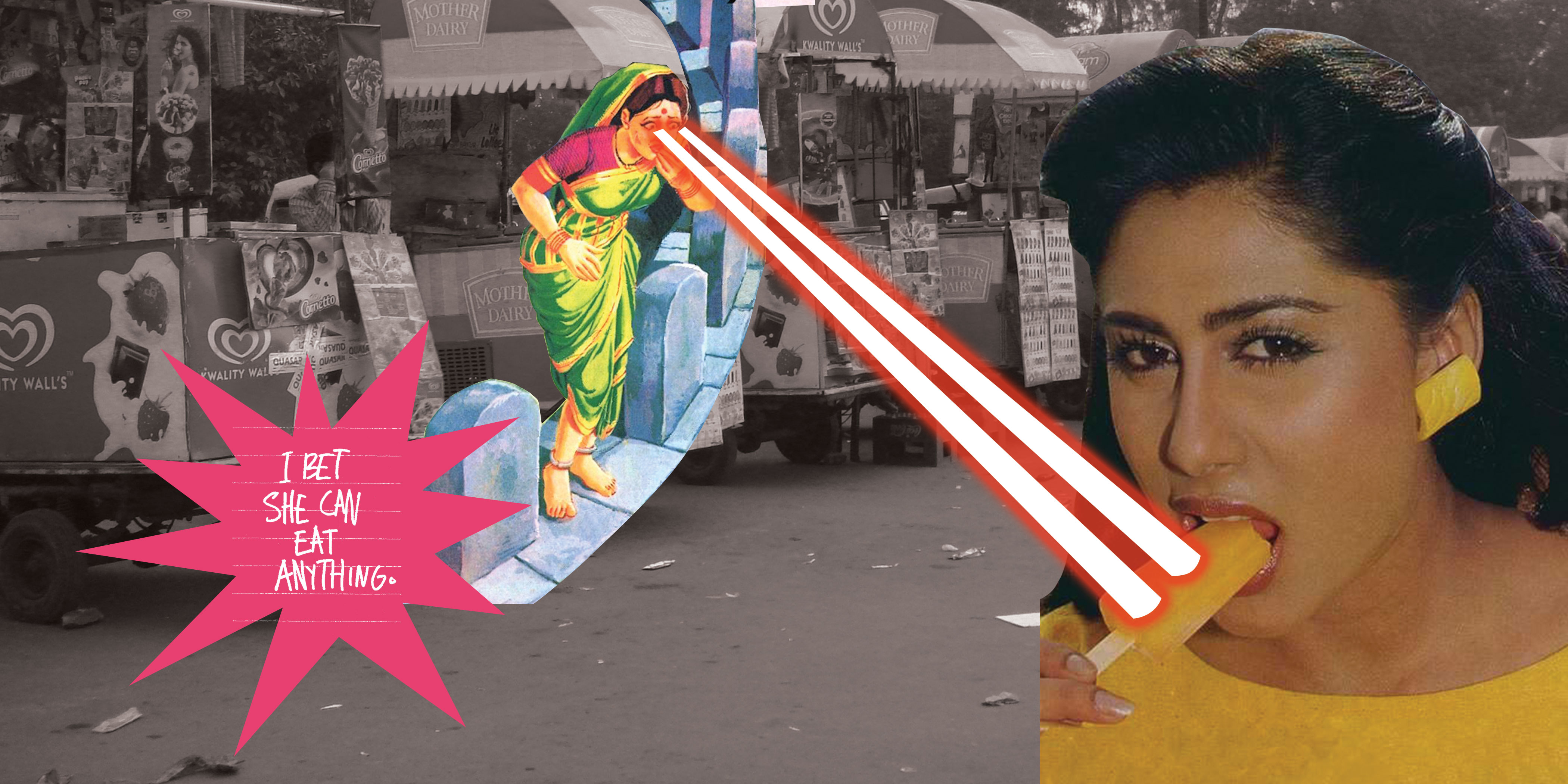 Women from vintage Indian ads ordering Domino’s pizza and drinking sugar-free chai. Old grainy photos of Indian Flight Attendants with Victorian corsets superimposed over their torsos. An image of Madhubala from Mughal-e-Azam wondering if she smells food, instead of singing about Krishna flirting with her on a river bank. These are all images from visual artist Kritika Trehan’s project Excess, a collection of beautiful digital collages that use satire to explore the culture of body shaming that pervades Indian society and media. The visuals in the book are based on real stories of shaming experienced by urban women from ages 13-55, but the book’s form itself mimics that of a fashion catalogue, highlighting the influence of the media and the ideas of perfection it propagates. 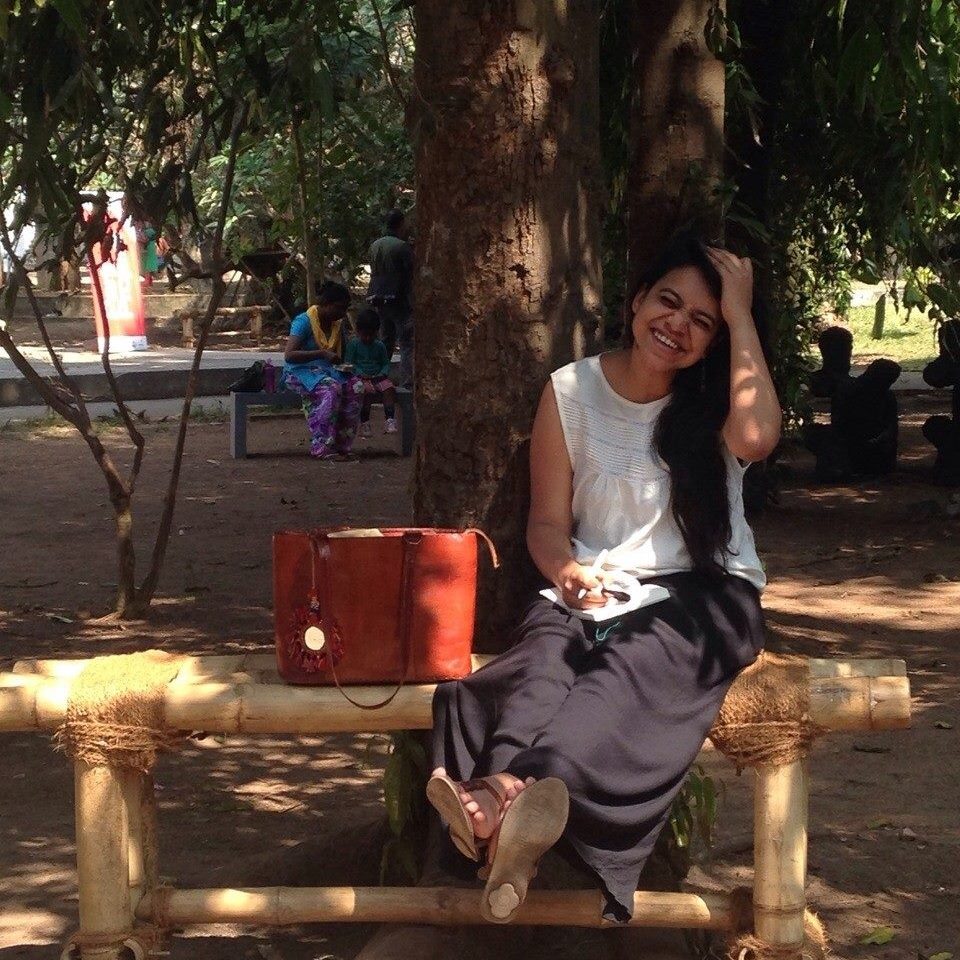 Twenty-two-year-old Trehan is a graduate of Srishti School of Art, Design and Technology, having just completed her Bachelors in Design with a specialisation in Visual Communication. Although she never really liked to draw in school where there was no freedom to experiment or to be imaginative, having a fashion designer mother and a furniture/interior designer father meant that Kritika grew up in a creative atmosphere at home in Kolkata. Going to design school gave her a space for free artistic expression. She started doing digital art two years ago, when a friend recommended that she use a Wacom tablet. Trehan believes in ‘organised chaos’, which plays out beautifully in her work.

We spoke to Trehan about her art, and the way it attempts to build a narrative about body shaming.

Tell us how the idea for your project Excess came about. Did you have an epiphany of sorts or was it something you’d been thinking about for a long time?

Excess comes from a very personal space. Coming from a family where my parents are from two different cultures, I have always had to face confusion as to how I am supposed to look. Whereas the Punjabi side of my family always encouraged me to eat more “ghee” or “shakkar” the Rajasthani side subtly encouraged me to be leaner and eat “simpler” food.

I had been reading The Beauty Myth by Naomi Wolf, which became the starting point of a personal and social enquiry into the politics of body shaming, especially in India. I liked how The Beauty Myth was divided into different areas like hunger, sex and violence, out of which I felt like ‘hunger’ formed the basic raw material for my project. My own cross cultural confusion of the ideal body image fed into the process of rigorously collecting images and text to develop a language critiquing the context itself. We as Indians are no longer exposed only to a certain kind of culture, we are like this blend, this weird mixed breed. We are exposed to the west and we always feel the need to ape the west. At the same time we are living in India and we need to cater to what’s around us. So we end up thinking “I want to look like a white girl” but we are eating Indian food and have the body of an Indian woman. 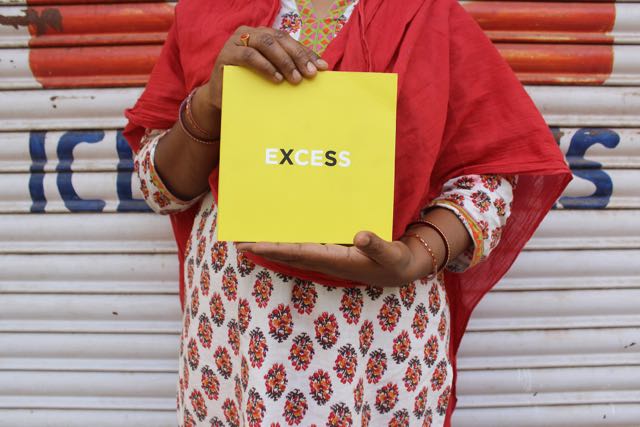 I started this project only in February even though I had been thinking about it for months. It took roughly 3 months to finish. Creating the collages came naturally to me, since I love working with this kind of imagery. Finding that correct balance between humor and talking about a serious topic was difficult, and also at times I found myself holding back a lot of things, as it was a very personal project. 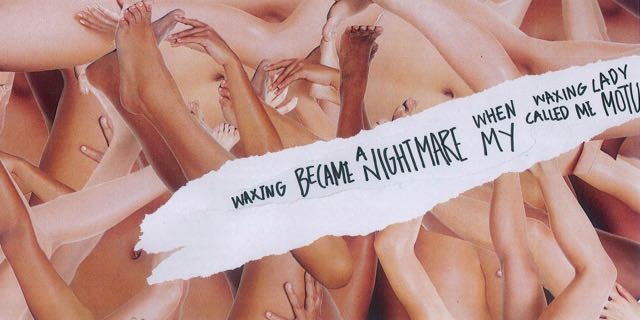 Your project uses satirical digital collages to talk about body shaming and its inherent gender bias in Indian society, using images from Indian visual media. Tell us how you went about choosing images for your project. Where did you look? What did you look for?

This was probably the most difficult but also the most fun part of my process. Finding the correct kind of images and even the number of images. I surfed the Internet and many books rigorously; I also kept my eyes open when going to the local grocery store or even things painted on the side of shops. Bollywood was a huge influence as well since it forms a large portion of the Indian pop culture. I searched for a lot of nostalgic images as well as old advertising since media and advertising were the other major themes of the project. Tumblr blogs were a very helpful resource. 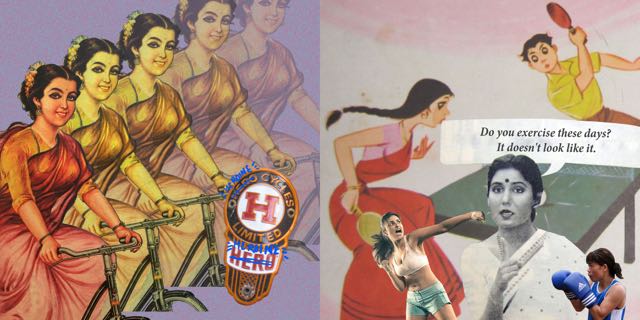 I did not look at any current fashion catalogues, but remembered a few from when I used to go to the tailor shop with my mum as a kid. The catalogues would be bulky and would have “fashion drawings” with sketches of very tall women. I came across a lot of advertisements that dictated how a woman should be “pure” and “white” since they obviously go hand in hand. But I think something that really screamed at me was the Indian educational chart and just the way women and men were portrayed in them. Whereas the women were mostly seen doing household work and always as straight figures the men were shown being dynamic and playing sports. 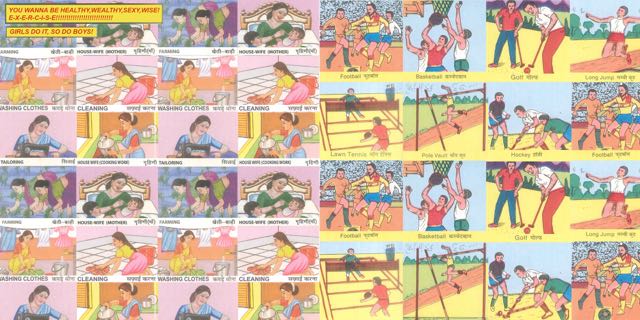 You’ve used images from different eras in your collages. While exploring these images, have you noticed any changes in the way people think of ‘ideal’ women’s bodies over time?

Yes, most definitely. Initially I think it was more about the face and India’s never-ending obsession with “fairness” but slowly the body started to become the focus with diet pills, spanx, leggings, Special K etc. Also the heavy influence of social media is very direct where a woman is constantly told to look a certain way, whether she is skinny or fat due to constant and instant circulation of images. 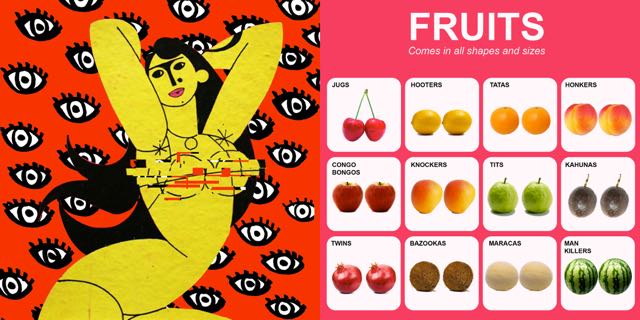 There are several quotes in your work which talk about a woman’s family members, friends, classmates and strangers expressing disapproval over her body. Are any of these quotes from your own experiences? Tell us how such experiences have affected you and your art.

Initially the project was going to be based only on my own experiences, but in order to understand the subject better I decided to speak to other people which ultimately helped me let go of a lot of insecurities I had about my own body. When you have any insecurity about your body or face or hair, you feel like it’s only happening to you. That’s how I felt, and that’s why initially I was only going to include my experiences in this work. But when I started telling people about it, my friends and professors said that I should talk to more people around me because it happens to everyone. That’s when I started talking to people and I was appalled by some of their experiences of being shamed even by their peers in school. Knowing that other people have been through the same thing as I have helped me get over my insecurities. 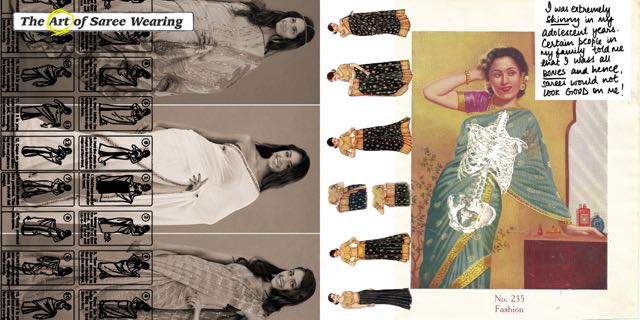 I think one major learning that I took away from the course of this project was that I no longer feel the need to body shame anyone even though all this while I had been doing it myself in my head subconsciously. The ignorance is what I aim to dissolve through my project. There’s a spread in my book which talks about jealousy. It has a woman looking with laser beam eyes at another woman eating ice cream, and the text says, “I bet she can eat anything and not get fat.”

I was being fat shamed so much that I used to look at skinnier girls and in my head I used to always feel like “Oh she must not be eating at all”. When I would look at a girl, without even realising it I would think of these things. I don’t do it any more at all because now it’s a conscious voice after working on Excess. 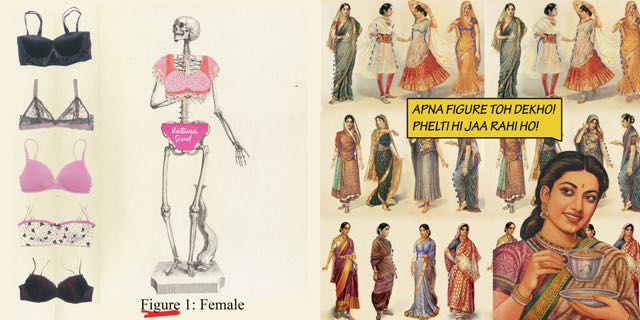 Your art is mainly in the form of digital collages. What effect does this choice of digital media have on your artwork, the way it reaches people and the way people engage with it?

Images are medium I chose to work with since nothing in this digital age is as fast moving and easily accessible as photographs. They can be printed individually, in a mass-produced book or even simply be put on the Internet to reach a larger audience within seconds. Images were also the medium that magazines used to sell this idea of “perfection”. Even though my final piece is a book, I do have the flexibility to distribute the collages however I like. 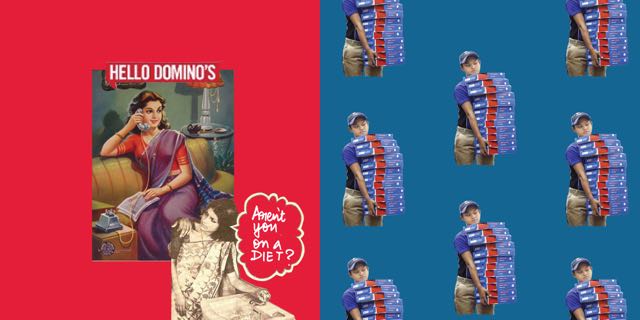 What other art media have you worked on so far? Is there anything new you’ve been looking to experiment with?

I try and choose my medium in response to the context I am working with, in this case it was photographs since that is what the media uses to “sell” beauty as well.

I like experimenting with digital and analogue mediums like watercolour and sketch pens. I love striking a balance between the two and sometimes this is where I struggle the most as well. 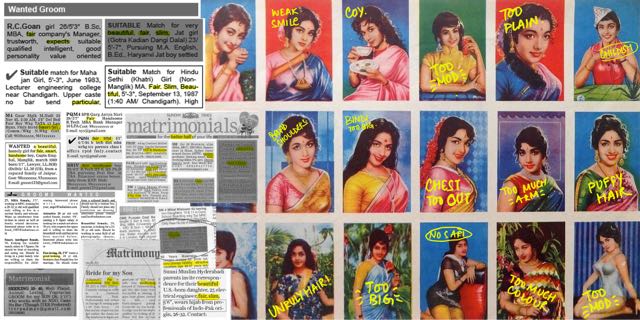 Are there any artists who have inspired your work? What are some exciting works of feminist visual art that you’ve come across lately?

I am addicted to finding new artists’ work. I am always online looking at different kinds of work. Recently I love what the Kadak collective is putting up, and even Adrita Das’ funny takes on India and nostalgia. I like how Adrita works with nostalgia and pop culture. A lot of her imagery that she uses in her work is similar to the stuff I have used for my collages. I think in terms of being an Indian and using that as an advantage to work with the images that are there in our entire Indian visual culture, I think she is doing a great job. She also uses satire in her work a lot, which is what I like working with.

In terms of feminist art, I love Judy Chicago and in recent times I love Polly Nor’s series of illustrations. Judy Chicago is a classic feminist artist. She is very direct and unapologetic about her art. She was one of the first few women to be bold and provocative in her work, which I aim to do in the future. Polly Nor talks about the body a lot. She talks about the relationships that women have with men, and she is so unapologetic about say, drawing a woman with body hair. I think she is challenging the perceptions and ideas that we have and again, she does this using humour. 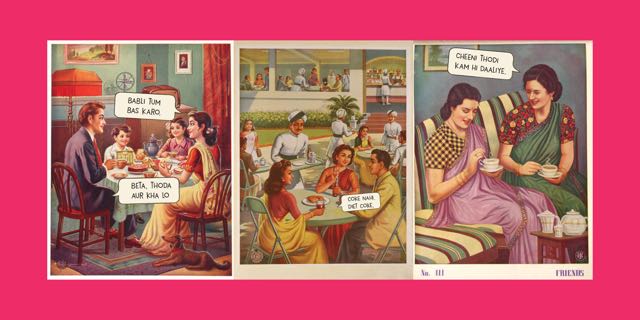 I think humour is something that is common among all these artists that I also like to imbibe in my work. . I like working with humour because if I feel like if I make a poster that says ‘Don’t body shame’ it ends up looking like a government poster.

What I’ve also learned from these artists is being fearless and just doing what they want to and not worrying about what people might think. They don’t believe in making pretty art.

We’d love to see more of your work. What else have you been working on?

This is in a very initial stage right now but I am looking at the aspect of working with home and identity. I was thinking of maybe using embroidery. I am thinking of how women were always associated with pattern making and doing things at home and housework and all that, so a lot of American artists actually used that to their advantage and they created art which was related to housework. So I am looking at embroidery and also home and identity, but this is all I know right now.