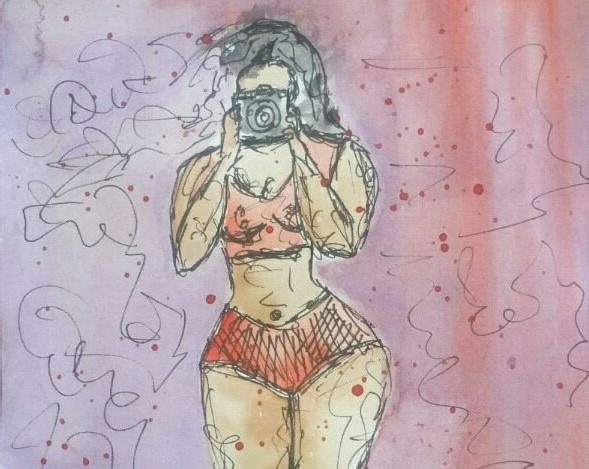 Apart from all this, on her Facebook page, Lines by Su, she puts up several of her illustrations and paintings. Art comes as a natural way to deal with problems she says, and that’s how her series Fat-Bottomed Ladies began. We spoke to her about unrealistic beauty standards, body image issues and her future plans for the series.

How did this series start? What gave you the idea?

I was having a conversation with a friend of mine, who was living abroad and had come down to visit. I hadn’t seen him for years, and we were talking about some international projects. I’m sure it didn’t even strike him when he casually said, “You’re too fat for the international market. We will not make you meet the clients face-to-face. We’ll show them your work. Because once they see the work, they cannot say no to you, because the work is good.” I was stunned for a minute. I know him very well, and he’s seen me from the time I was thin. And I realised there was no malice in his observations, it was just something that came naturally and casually to him.

What are these beauty standards?

First impressions always count. If you are fair, if you are slim, if you are young, you are considered to be more productive. It is connected with higher productivity, which isn’t true. I am in my 40s, and I know for a fact that I am so much more capable

than someone doing things in their 20s. But it is a perception.

Of course, I gave this friend a piece of my mind. That’s when I came back home and started thinking about this. And that’s how I usually deal with problems, I draw, I paint, and sometimes I write. And I was just doodling, and I did the first illustration, which was of this fat-bottomed girl with a camera, since I’m a professional photographer too. And that’s how I started Fat-Bottomed Ladies. One thing led to another and it was a joyous thing to do, and it became a series.

When did you start thinking about body image?

I have never had any body image issues, thanks to my parents. I am dark-skinned but I have never suffered any kind of problems because of that. I was brought up in such a way that I had some sort of reverse racism, and I thought all white-skinned people were not up to the mark. When you grow up, you start realising not everything your parents said was right. But I grew up with a very healthy image.

When you enter your 40s, your body changes, and a lot of things are not under your control. And if you have a hormonal problem or something like that, it becomes slightly difficult. I didn’t notice it, but the people around me did. I think it’s a typical

greeting in Bangalore, “Oh my god, you’ve lost so much weight!” or “Oh my god, what happened?” It’s almost a respectable greeting. It’s only when it started that I became a little conscious.

I happen to be slightly overweight, or at least some of my friends think so. And it could be for many reasons. Just because somebody is fat, don’t think they are lazy. It could be health reasons.

How have people reacted so far? Do you think the illustrations have the power to subvert the standards created by media and society?

Whether my illustrations are going to change anything, I don’t know. But when I put it on Facebook, people comment, and say, “Oh, that’s so me!” And for five seconds, they are thinking about that. And I think that is good; becoming aware of it. I do it because I enjoy doing it, I am smiling the whole time when I paint them. For a recent project, I was making the lead of Sex and the City a fat-bottomed lady. Can you imagine that?

Any ideas for the future?

If you see all the women, even if they are very strong, well, there are no fat girls there. And these are the women-oriented films, where women are the main characters. So I thought I’d have some fun. I just started re-doing a series of posters like The Devil Wears Prada and Sex and the City.

Explain your choice of material for illustrations, and the kind of style you employ?

I was a pen-ink artist officially — it flows very easily. I keep doing different things. I was doing pen and ink, and then I fell in love with watercolours. When I draw these women, I can’t imagine them in the black and white of my pen and ink drawings. I can imagine them only in colours, so that’s one of the reasons they are in watercolours.

I paint imperfect figures. Either the limbs are not of perfect proportion or I let the colours run into each other. I don’t think anything in this world is perfect other than the beauty that you find in the imperfections. By looking at perfection in everything we are just complicating our lives; we are also denying ourselves the right to be who we are and enjoy what we want. All because we want to fit into this perfect mould to be accepted and acknowledged. That’s total crap, and still we all secretly pine into this perfect box. So imperfections are deliberate in my works.

One Response to “An Artist in Praise of Fat-Bottomed Girls”