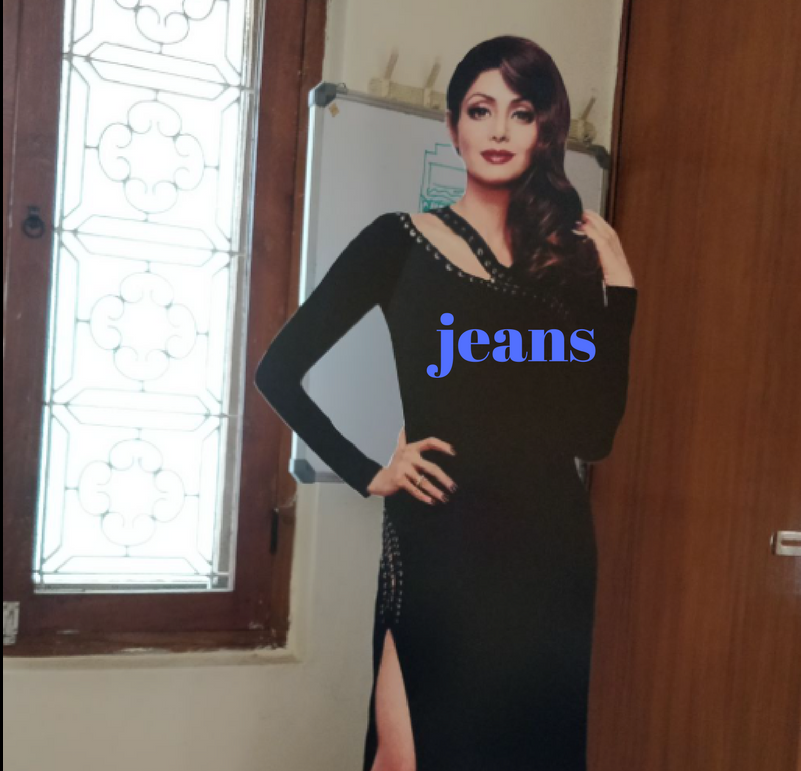 What did you do last Saturday? We danced, babies, we danced at the first edition of Leddis Night! It was a full house and it was awesome.

The reigning goddess of Leddis Night was the enduring wit and work ethic of the late, great Sridevi. And we were happy to hang out with so many Sridevi lovers and Sridevi cosplayers. Type #leddisnight into Instagram or go to instagram.com/theladiesfinger to see some fabulous avatars. (And in related news, we heard wonderful news on the grapevine that Lalita Iyer, author and former Managing Editor, Filmfare is working on a book on Sridevi.)

In case you missed Leddis Night, not to worry, we are sure to do it again. And also we have fun suggestions for this Saturday. While dudes are still earnestly moaning and recycling op-eds about how LOSHA is daath-and-dooom, Bangalore-based youth organisation Samvada has this going on this afternoon. 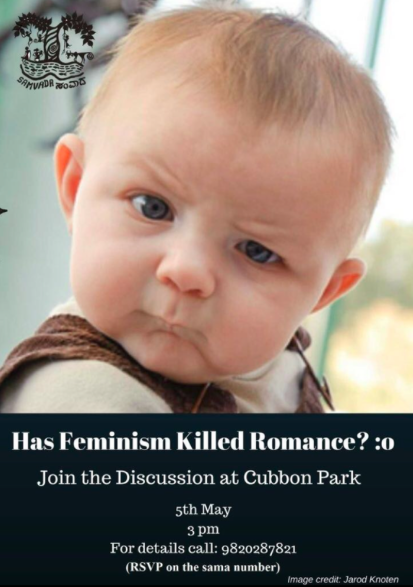 You know who we wish would catch a flight to Cubbon Park and attend this discussion? Mark Zuckerberg. Seriously what is this Facebook dating app? The announcement of Facebook’s new dating feature, creatively called ‘Dating’, comes alarmingly close on the heels of the massive and embarrassing (for Facebook) Cambridge Analytica debacle over the social networking giant leaking the personal data of millions of users to a Trump-linked company. This has allowed the media to report on the planned dating feature with headlines like, Facebook’s dating app is finally making privacy invasion sexy and Facebook’s new dating service hopes love conquers all, even privacy issues.

In happier social media news, Christina Dhanaraj (writer, activist and co-founder of the Dalit History Month Collective) and activist Ben Neethipudi hosted a lovely Twitter chat late last month called ‘Love Me But Caste Me First’ about how the experience of romance and dating interacts with the experience of being Dalit. In it, they discussed Brahmin-to-Brahmin set ups by friends and colleagues, the fact that Savarna modes and frameworks of love are aspirational to many Dalits without the realisation that those modes are a function of caste privilege not timeless romance, and the challenges of hiding and expressing Dalitness in romantic relationships. Go over and read the whole thread.

This week also saw Pallavi Rao’s intriguing essay Rasam Sadham as (Dis)comfort food. Rao unpacks the Brahmanical consciousness in her mother’s recipe for rasam while taking us on a journey through what the casteist forbiddances and allowances in these recipes reveal, and the “histories of exclusion, segregation and power dynamics” they speak of.

Now without the usefully complicating lens such as Rao’s essay one might think of comfort foods like rasams as “human affection expressed through the form of the family.” You say what? This po-faced description comes via an typically super Elif Batuman essay on the Japanese business of rent-a-family. Apparently these agencies do the bulk of their business for events like weddings as in the plot of Shuddh Desi Romance. But a good chunk of their business is in providing actual substitute relatives. A pretend granddaughter, a substitute father and so on. Divorce ceremonies, weeping relatives, actors who will pretend to be your apologetic lover to your angry spouse, the essay is just delightfully chock-a-block with life situations that beg to be resolved with commerce. Meanwhile, it may be that you’re thinking of so many relatives you would like to loan out, given that they seem to have SO MUCH time to fry yourbrain. Are you thinking it? PLEASE MAKE IT. It’s an app we are all waiting for. Please won’t you make it? 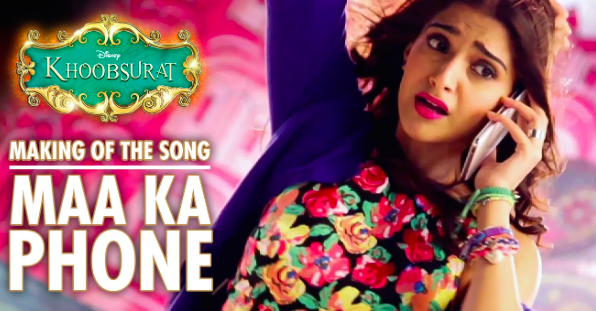 And talking about mothers. The American literary press is reeling under the onslaught of books about motherhood by heavyweights such as Jacqueline Rose, Sheila Heti and Leila Slimani. Read more about it in Parul Sehgal’s piece in the New York Times here, which kicks off with an awesome rumination on Jacqueline Rose’s 2015 observation that “there seems to be something about having the word ‘girl’ in the title of a book that guarantees huge sales”, but that these “girls” have been replaced by mothers. 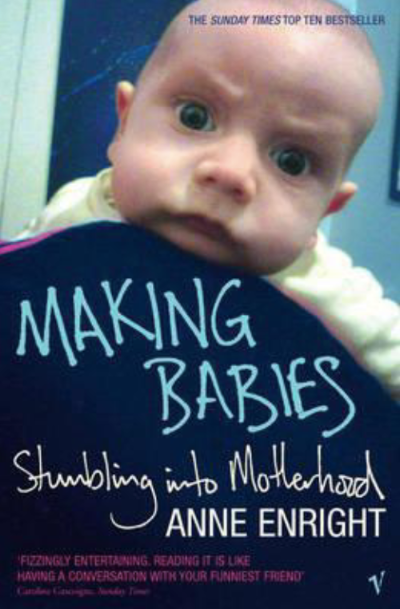 Dark, funny, brilliant it’s a book to buy many copies of, as has Khabar Lahariya’s Pooja Pande who first introduced us to this book. Speaking of which have you pitched in for KL’s fundraiser yet?

Still talking of mothers, not so far back, one of us mentioned a local bakery that made Peppa Pig-themed cakes and cupcakes to a friend with a toddler. The friend threatened to break our legs if we mentioned this industry in front of her addiction-raddled child. 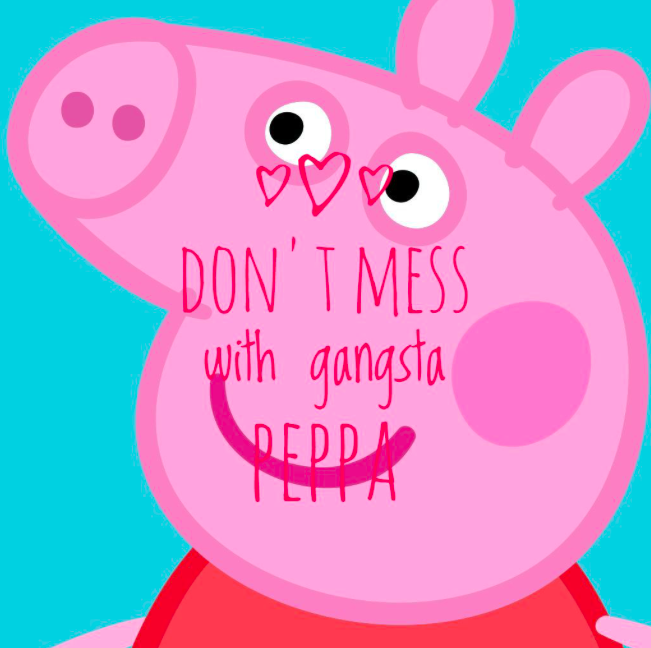 Our friend is sure to sympathise with the mighty state of China that has banned the little piggy from social media for being too “gangster,” and has deleted tens of thousands of Peppa videos. But *snort* why? Because young Chinese have apparently subverted Peppa as a symbol of rebellion and are even getting Peppa tattoos. Now is there any surprise that Chinese people are taking their subversion where they can get it? I mean last year China banned Winnie the Pooh because Winnie apparently looks like Xi Jinping. What do you think? 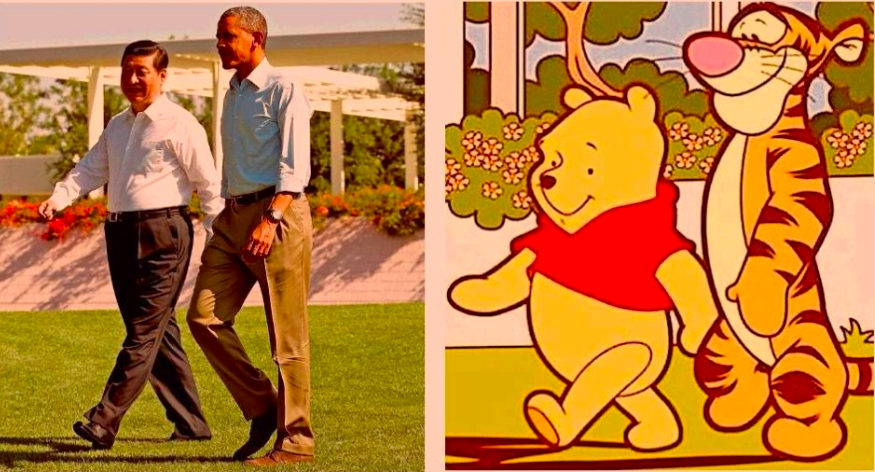 We too like to get our happies where we can get them. April 29 was International Dance Day and our behens at Agents of Ishq and Point of View collaborated on this fantastic video that shows differently abled people dancing in wheelchairs and in the best period costume to that 60s hit Aaj Kal Tere Mere Pyar Ke Charche. Coz ‘everybody loves to dance and everybody loves to love’, right? 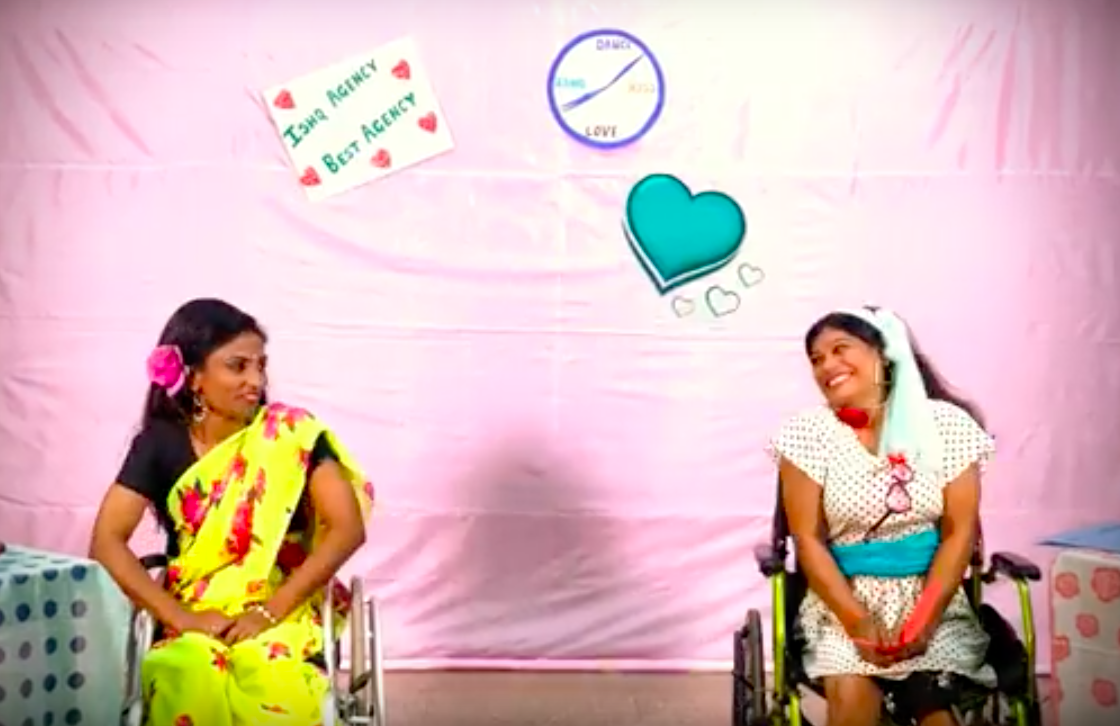 You know how you worry nowadays that the cool quotes you loved are all made up or misattributed or, you know, fake Rumi? Luckily Emma Goldman’s quote, ‘If I can’t dance, I don’t want to be part of your revolution remains unsullied in its provenance. You can read about it in Vivian Gornick’s slim, stunning biography of Goldman. Told that her OTT, wild dancing was *cough* ‘hurting the cause’, Goldman unleashed what became her famous motto. Oh, ‘hurting the cause’. What would we do without you? 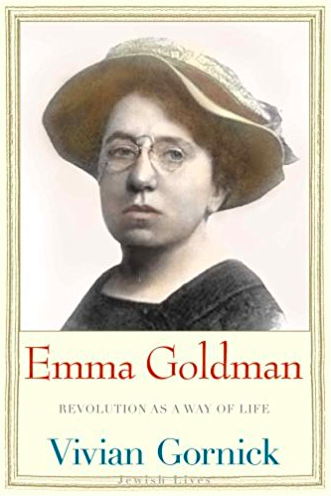 Last month, we told the former Peppa Pig addict that since she is now addicted to football, she might want to check out Jafar Panahi’s 2006 movie Offside in which a group of Iranian girls try many tarkeebs, including dressing up as boys, to sneak into a football stadium because stadium is manaa for girls. 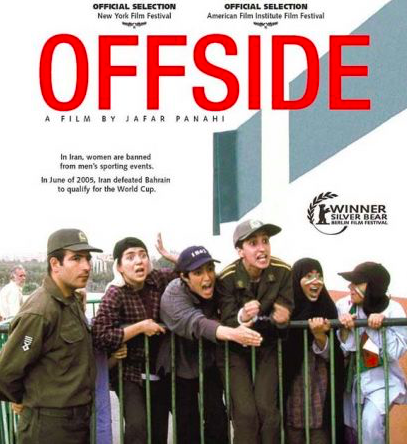 Former Miss Peppa said to us with a touch of scorn, why won’t they let girls in, whatever, I will make X (male bestie, also 8 years old) watch it. Implying that it will be good for him. We retired from our unsolicited auntie moves (if only we were in Japan, there would be a revenue model). This week, we were thrilled to see the photo of the five Iranian girls who snuck into a match in Tehran while wearing fake mooches, wigs et al. What to say! Panahi probably would be tickled also. After all while under house arrest, he defiantly made a movie and had it smuggled out of Iran in a pen-drive inside a cake. 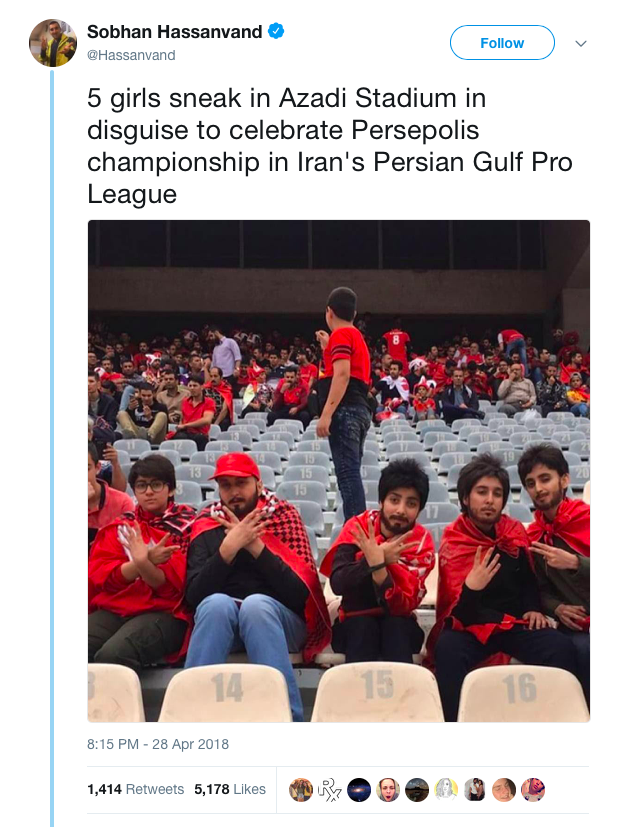 Speaking of defiance in the face of adversity, have you seen this picture of Deepika Singh Rajawat, the lawyer for the family of the 8-year-old Kathua rape victim? 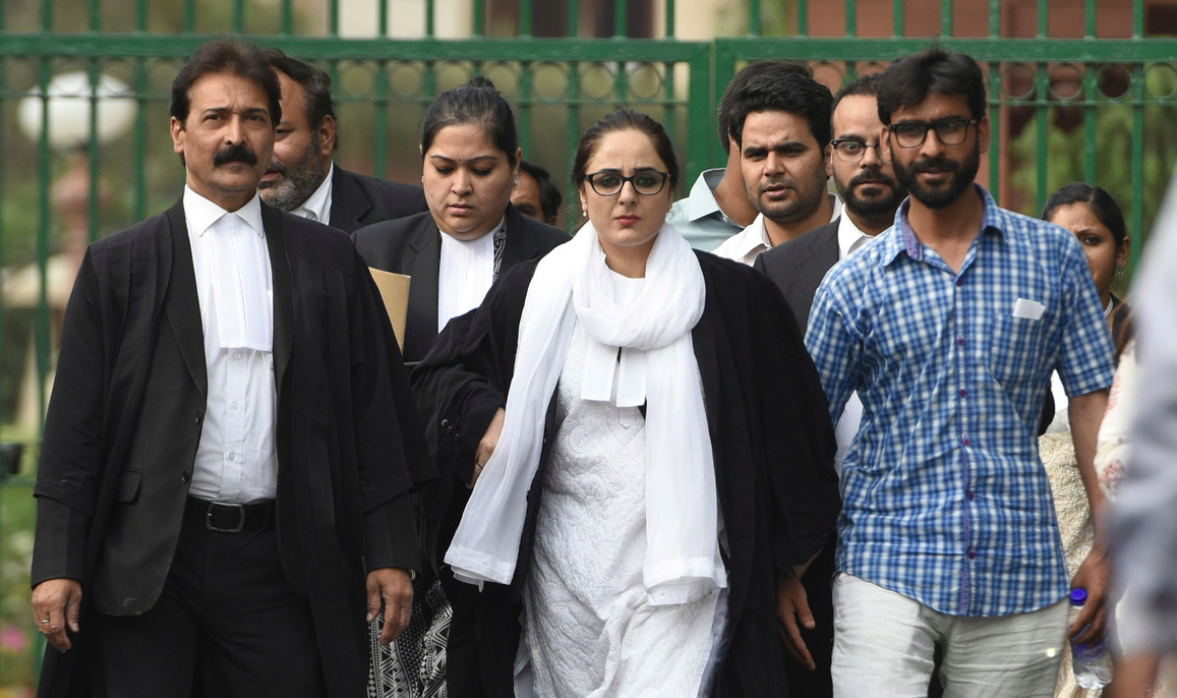 Kuba Shand-Baptiste, writing in The Pool, asked “How often do we see a photograph like this? A confident, professional woman flanked by men who are not lecherously staring at her?” And the answer is, not often enough.

And finally, this week, we also read on Timeline.com about a smooth trick feminists in the 60s and 70s would play on men lecherously staring at them. Susan Brownmiller recalls this trick, called “Ogle-Ins”, in her 1999 memoir In Our Time. Back in the day, street sexual harassment wasn’t framed as a political issue, until some feminists decided to take the bull by the horns (or in the case of one woman named “Wendy Wonderful”, grab the harassers by the crotch), and turn the tables on street sexual harassers. Feminists would gather at spots where they were aware men would congregate to ogle or catcall women, and subject those men to the same treatment as well. Brownmiller recalls Wendy Wonderful grabbing one harasser by the crotch, and details how several other feminist groups organised similar Ogle-Ins in cities across the US. Of course, stories like this serve to remind you how far the feminist movement has come, both in terms of the kinds of battles it fights, and the tools with which it fights them, but it’s always important to know our histories and understand the struggles that brought the movement to where it is today, whether we agree with or relate to those methods today or not.

And with that, it’s time for you (and us) to get back to Saturday. See you all next week!