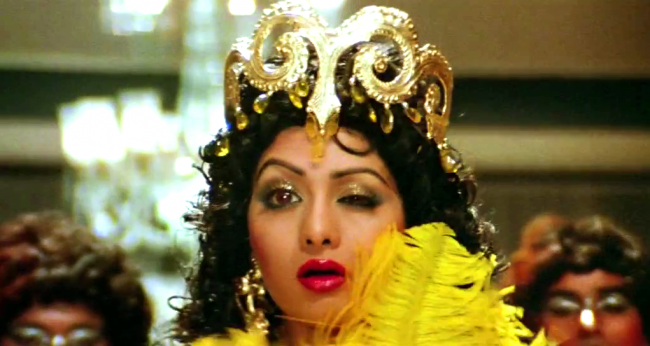 The 1975 movie Julie begins as a tribute to the overheated and fecund. Julie, played by a ripe and coy Lakshmi, is dying to sleep with her best friend’s brother Shashi and eventually does. One night in her bed at home, she twists, writhes and moans ‘Oh Shashi.’ And from the darkness comes an annoyed and shrill ‘What man!’ from younger sister Irene. 12-year-old Sridevi making her Bollywood debut started as she meant to go along, constantly at odds with the boring and the boringly sincere.

Sridevi made us fall in love with the texture of artifice. Sequins, feathers, glitter. Masks. Transparent umbrellas. Wet saris. Snake dances and enormous headgear. Even her high, improbable voice was deliciously unstable, an auditory soufflé and a constant joke about femininity. It wasn’t accidental that Sridevi’s roles so often involved double roles and subterfuge – the twins Anju and Manju in Chaalbaaz, the mother and daughter roles of Lamhe and Khuda Gawah, the opening sequence as an Afghan man in Khuda Gawah, a whole costume store in Roop ki Rani Choron Ka Raja. So much so that the ostentatiously white and ‘simple’ clothes she wore in Chandni seem to wink their fancy dress quality disrupting the alpine Yash Chopra imagination.

The feminist potential of movies and female actors obviously lies beyond neatly emancipatory mein meri astitiv ko doondhni ja rahi hoon endings. Sridevi gave us, unlike any female actor I can think of, the emancipation of play. The dethroning of the serious, as Susan Sontag defined the nature of camp, existed in every sequin, every muscle of her incredibly mobile face, every flutter of those gol-gol eyes. For every girl schooling herself with teeth gritted to sundar-cum-susheel, Sridevi was jailbreak, a wobbly leap over the wall. You could teach Sridevi’s Anju Bharatanatyam but she might just tandav away from both home and balma.

Years later when I saw Sridevi in Gauri Shinde’s English Vinglish I was fascinated by the disappearance of the mobility, by her be-stilled face. She was playing a woman coincidentally called Shashi, a middle-aged woman newly in America and shocked that she was supposed to think less of herself because she didn’t speak English. Back then I wondered if “English Vinglish is the dystopic sequel about the distorted afterlives of Anju, Manju and all the other girls we so admired in school.”

In school, a smart friend told me that she had liked Tezaab so much because Anil Kapoor had done every crazy, violent thing he did in the movie for Madhuri Dixit. My school friend had been moved by the lung-filling idea of Madhuri inspiring so much sab kuch jala do in a man. But any sense of epic romance in Tezaab had passed me by. It hadn’t occurred to me at all. My memory of Tezaab goes straight from the numerical Madhuri to the surprisingly effective Chunkey Pandey lullaby. But in the department of Filmi Women Who Change the Destiny of Filmi Men I was more struck by the final frames of Chaalbaaz, where Sunny Deol and Rajinikanth both look bedazzled by their respective versions of Sridevi. They looked grateful and uncertain about how they had gotten so lucky. As grateful and uncertain as we feel today.

In school I read Filmfare and Stardust and Cineblitz and Nana, magazines that said things that would raise the hair of anybody used to today’s carefully processed celebrity pablum. In throwaway paragraphs they made homoerotic implications about Anil Kapoor and Jackie Shroff and moved on blithely to the next snippet garnered, they assured us, from behind a potted plant. One of those magazines wrote that Sridevi was inclined to wear ‘revealing’ clothes when she felt overweight and cover up when she was feeling thin. This was reported bitchily as if it was pathetic, but to my pre-teen self this promise of billowing fat seemed like a wonderful sleight of hand by someone who dressed like the magician’s assistant but was actually the magician.

And that feeling is what I remembered when I watched English Vinglish and concluded back then that “like a feathered hat, like a sequined headdress, Sridevi was making her stillness work to tell us that we have no idea what’s happening behind the blank faces of the sweet, trembling-voiced Shashis we think we know.”

2 Responses to “In Praise of Sridevi’s Artifice”