Every year in Mumbai, many people celebrate Janmashtami — the Hindu festival that celebrates the birth of Krishna — as a community, with several localities hanging high pots of curd while groups of young boys — “govindas” — form human pyramids to break them. This year, the Supreme Court has refused to reconsider the cap of 20 ft it set last week on the height of the dahi handis (which the Maharashtra government calls the “charm of the game”) and banned people below 18 from participating in the pyramids.

Photographer Ritesh Uttamchandani had photographed the festival on and off when he worked at the Indian Express and Hindustan Times, but in 2014, out of curiosity, he tried something different: he followed a group of “girl govindas”. The group, known as the Deep Krida Mandal, was comprised of 40 members from the crumbling Zia Masum chawl. Thirty-eight of those members were school and college-going girls from the chawl. In this group, Uttamchandani says, he found a cool team who “really knew how to have fun”. If a man whistled at them or attempted to harass them, they’d harass him right back. The boys from their chawl would travel with them on the bus to their destination, forming a “security ring” around them. “I was also asked to be part of it once,” says Uttamchandani, “since I was fully drenched, my camera had given up and also, why be useless?”

Uttamchandani says he’s glad he made the choice to follow a group of girls. “Bombay often gets a raw deal when it comes to images. Its easy to romanticise the landscape. Slums set against high rises, lovers squatting under umbrellas, its all good, but there also has to be some room for subversion. This is my city and my consistent goal is to make images that bring you closer to what it feels to be here, rather than what it looks like,” he says. 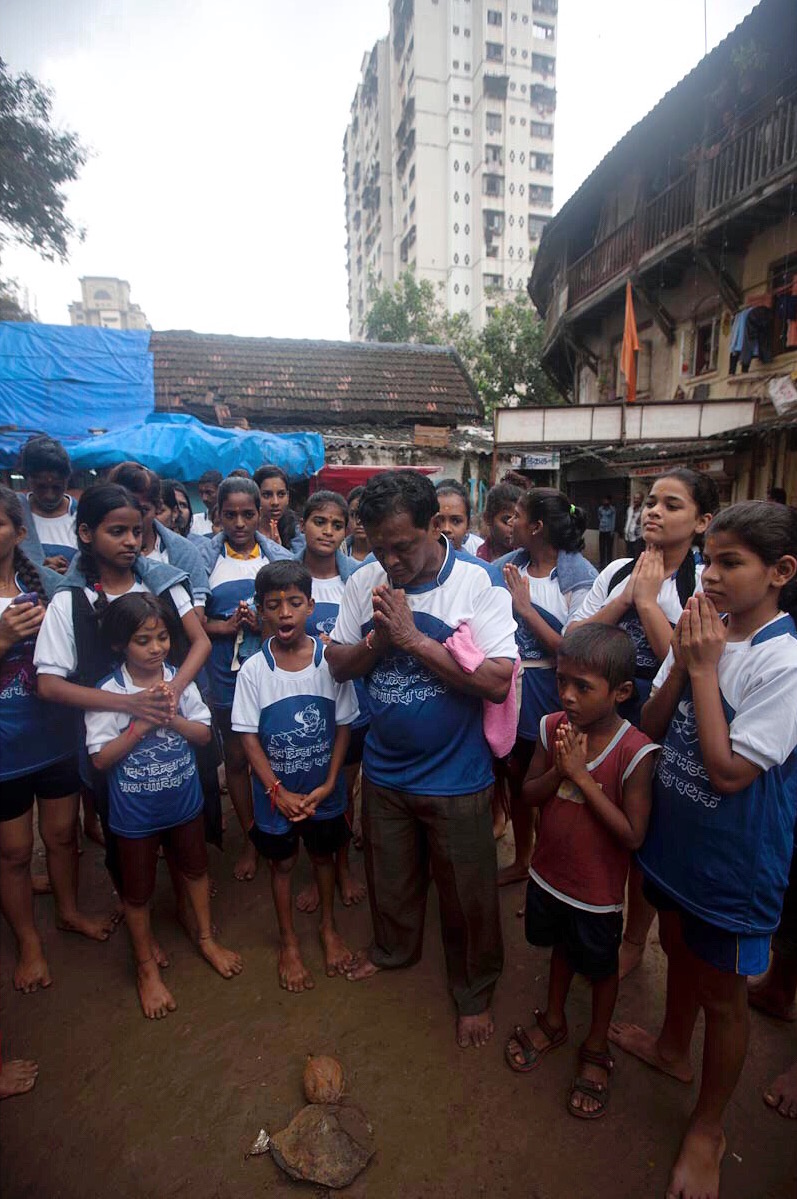 A young boy yawns as members of Deep Krida Mandal begin their Janmashtami celebrations with an early morning prayer. 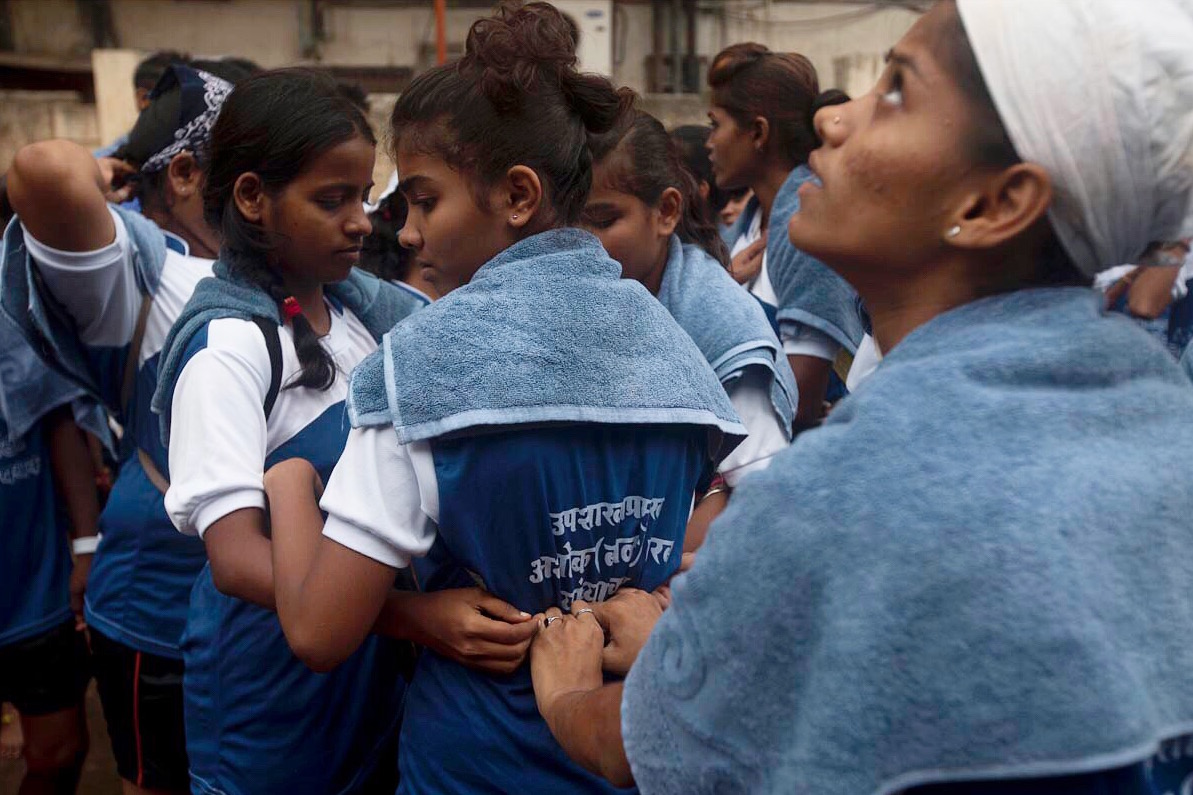 Fifteen-year-old Komal Ranpise sizes up the Handi in the compound of Zia Masoom chawl while tying a rope on Bhakti Ghorpades’s back. The rope is usually tied for those at the base layer of the human pyramid and acts as a support for the back and protects the girls from back injuries. 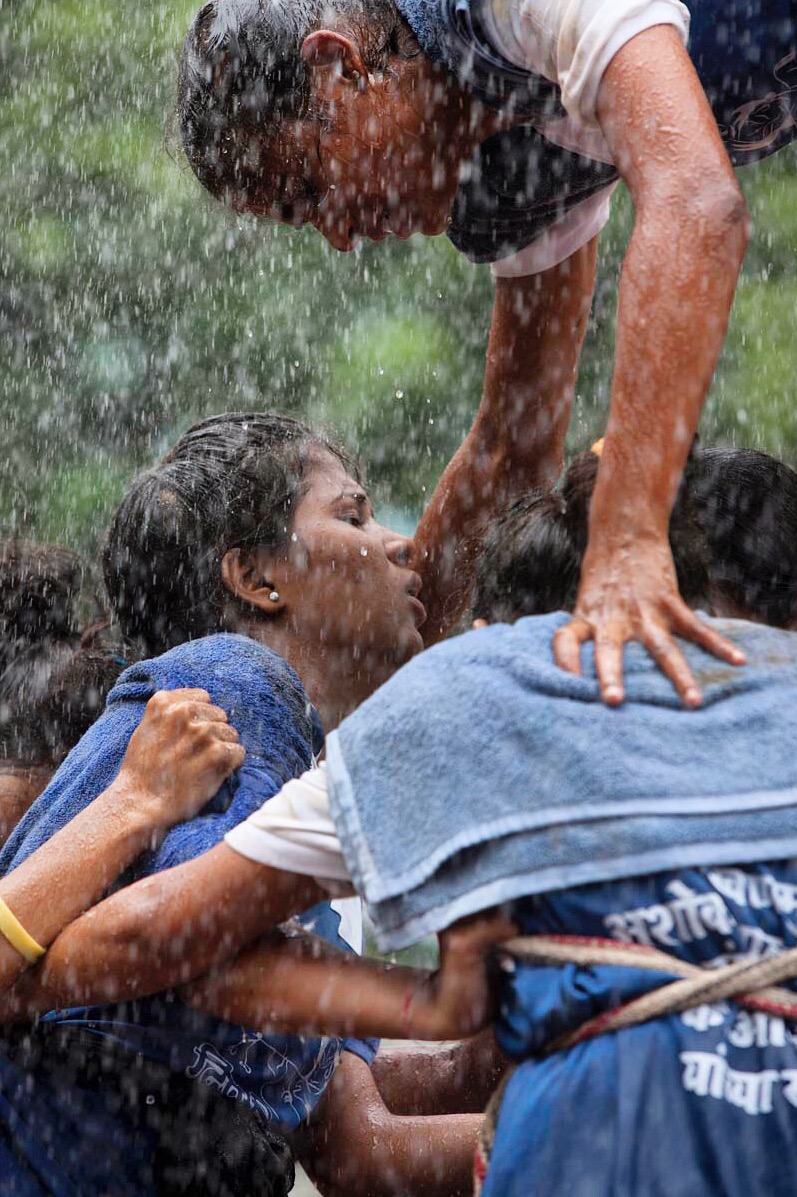 Caught under a heavy shower of rain, Pooja Sonkar grimaces in pain as the girls begin forming their first pyramid of the day. 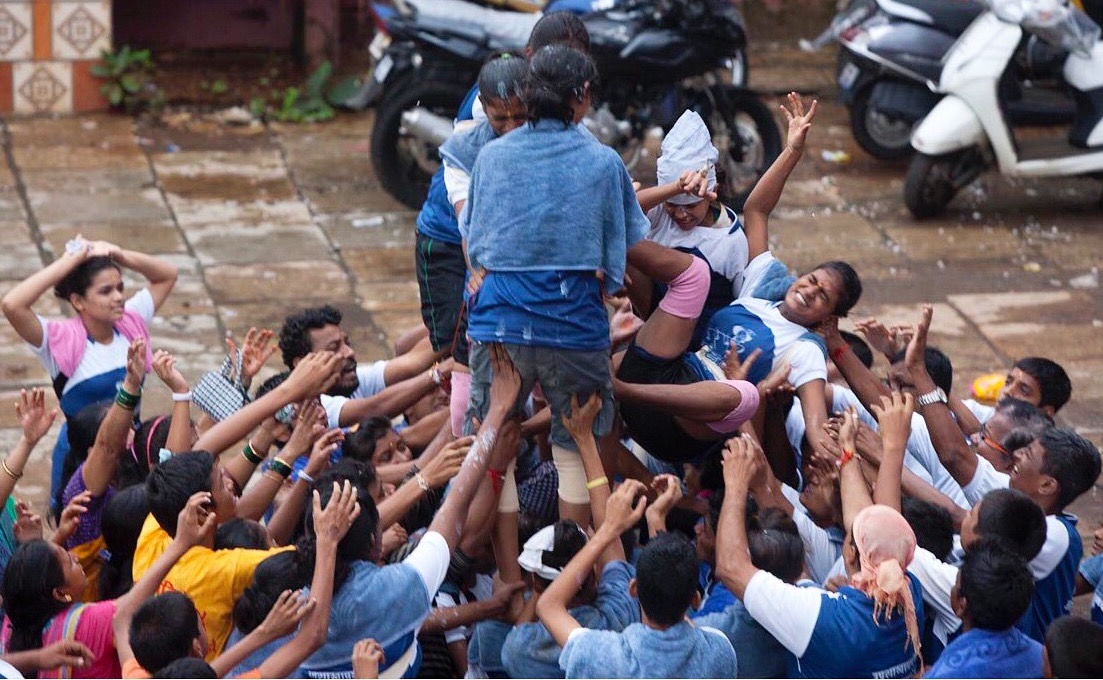 In the compound of a chawl in Worli, a settlement of workers who were once employed at the bustling cotton mills of Bombay, comes the first of many tumbles of the day. 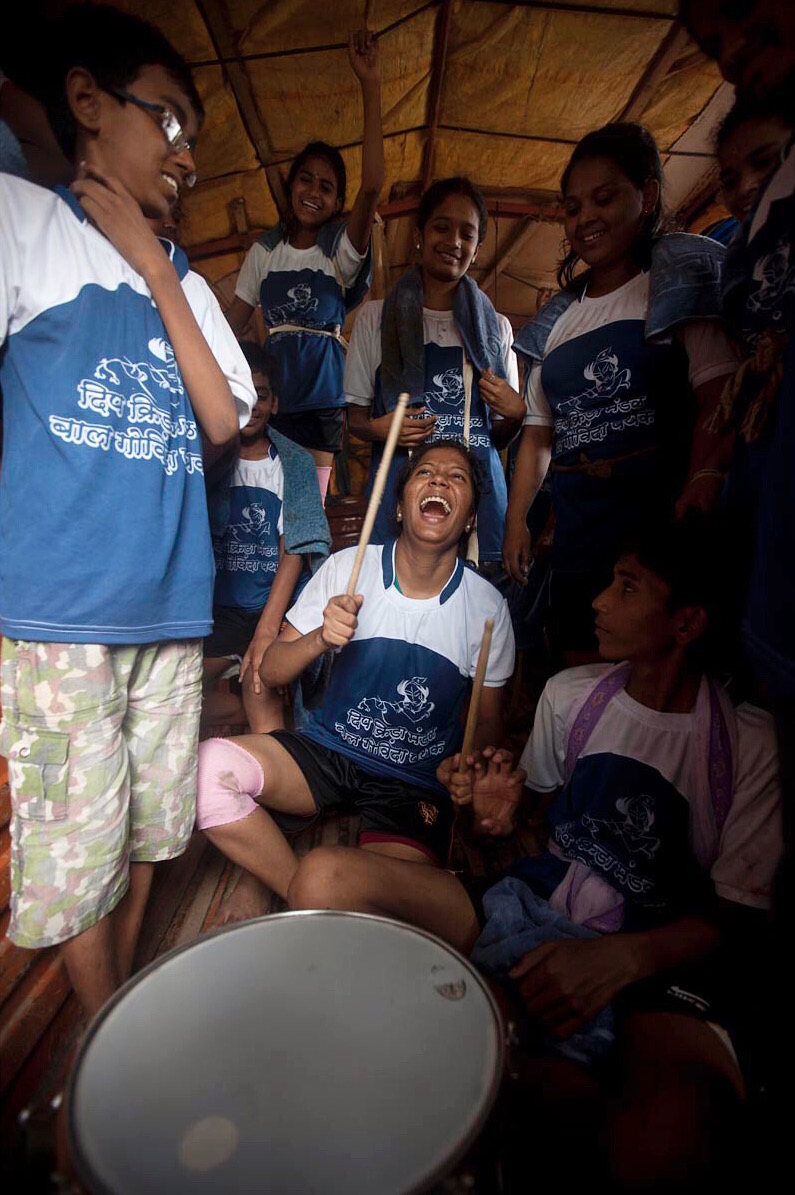 Back in the truck and off to a new location while the resident drummer Janvi Lad takes over. 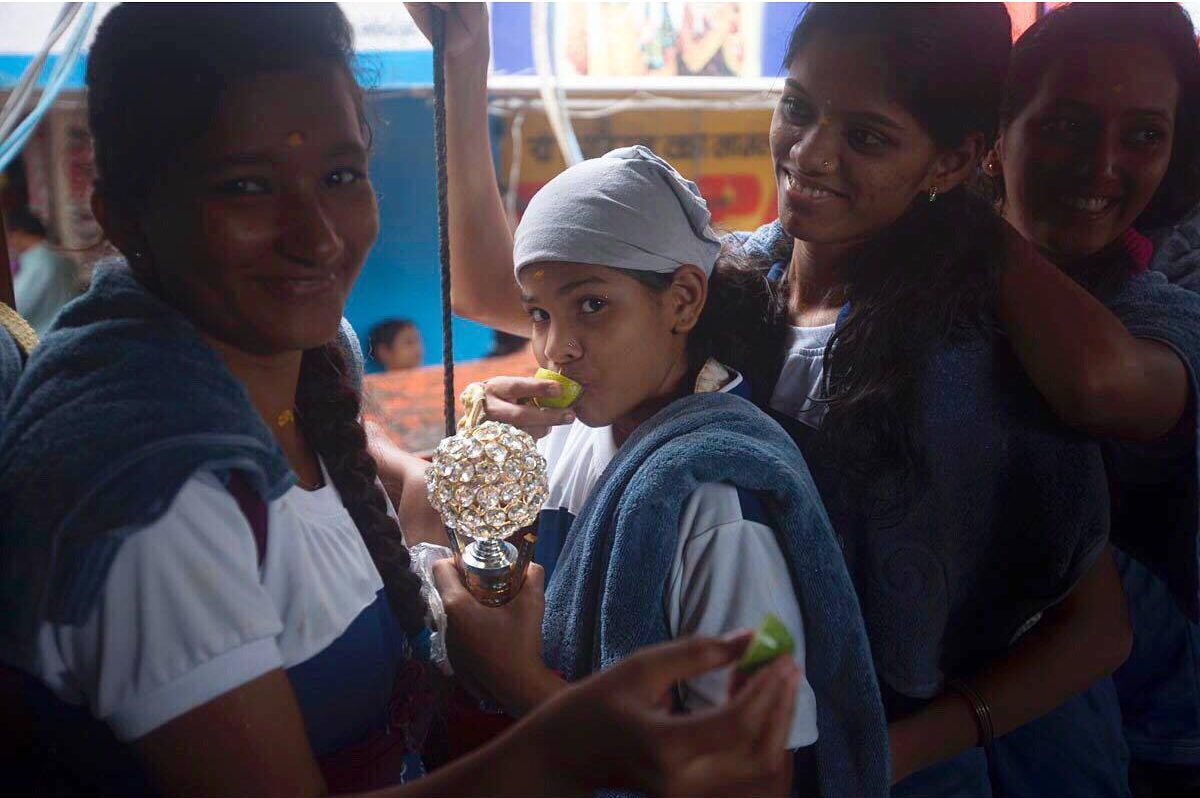 Horsing around on the journey. 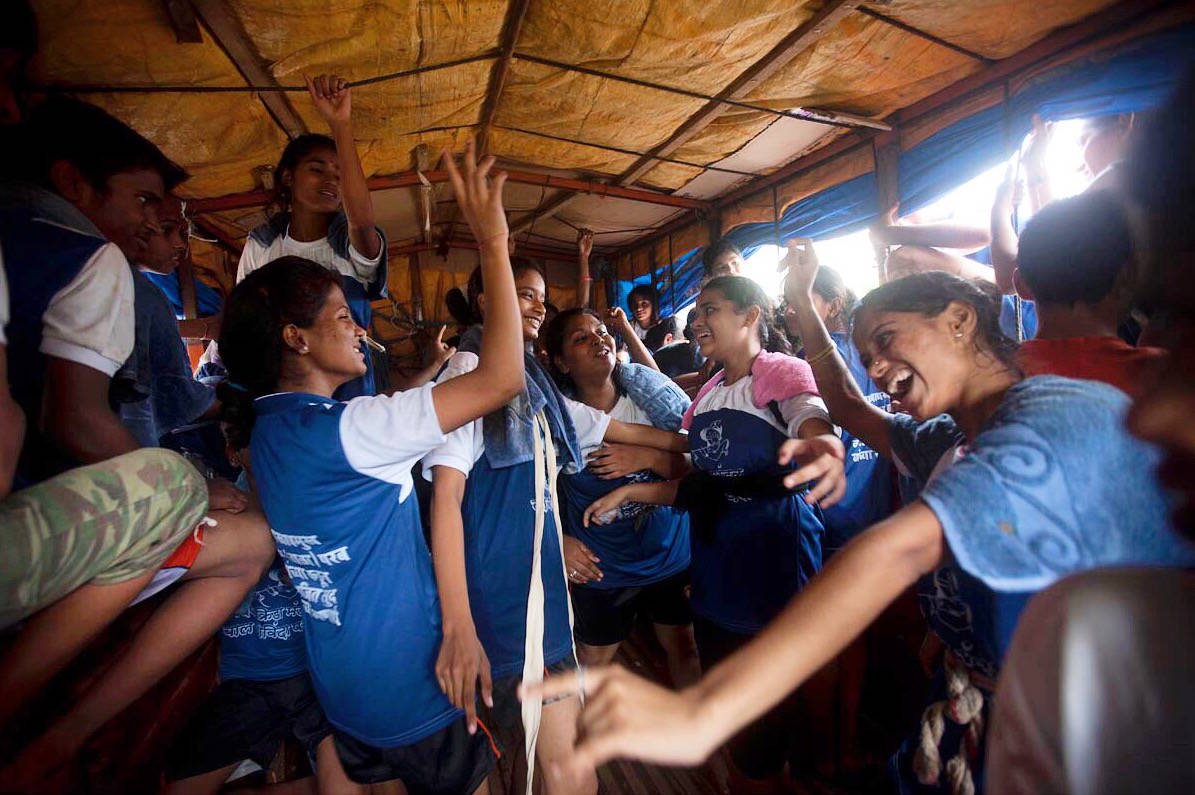 Komal Ranpise dances on the truck with the girls as they head to their next destination. 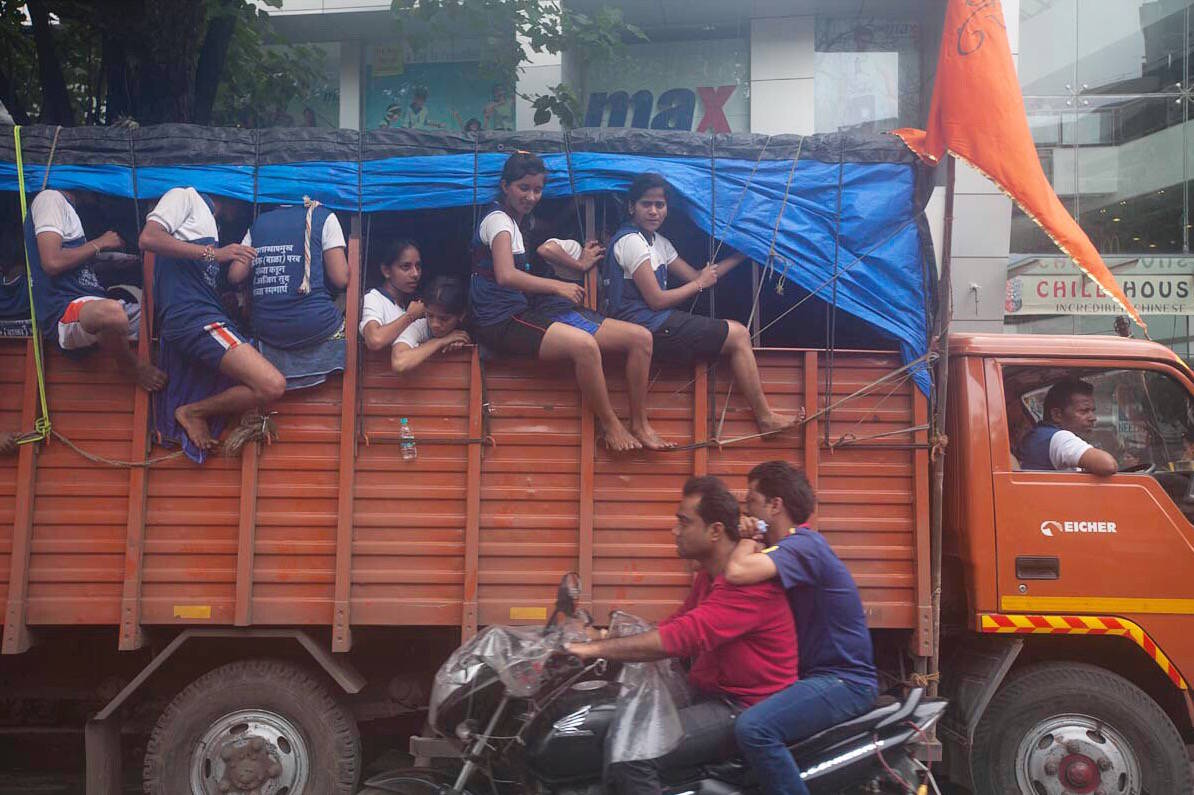 Hanging out of the truck while crossing Dadar Market. 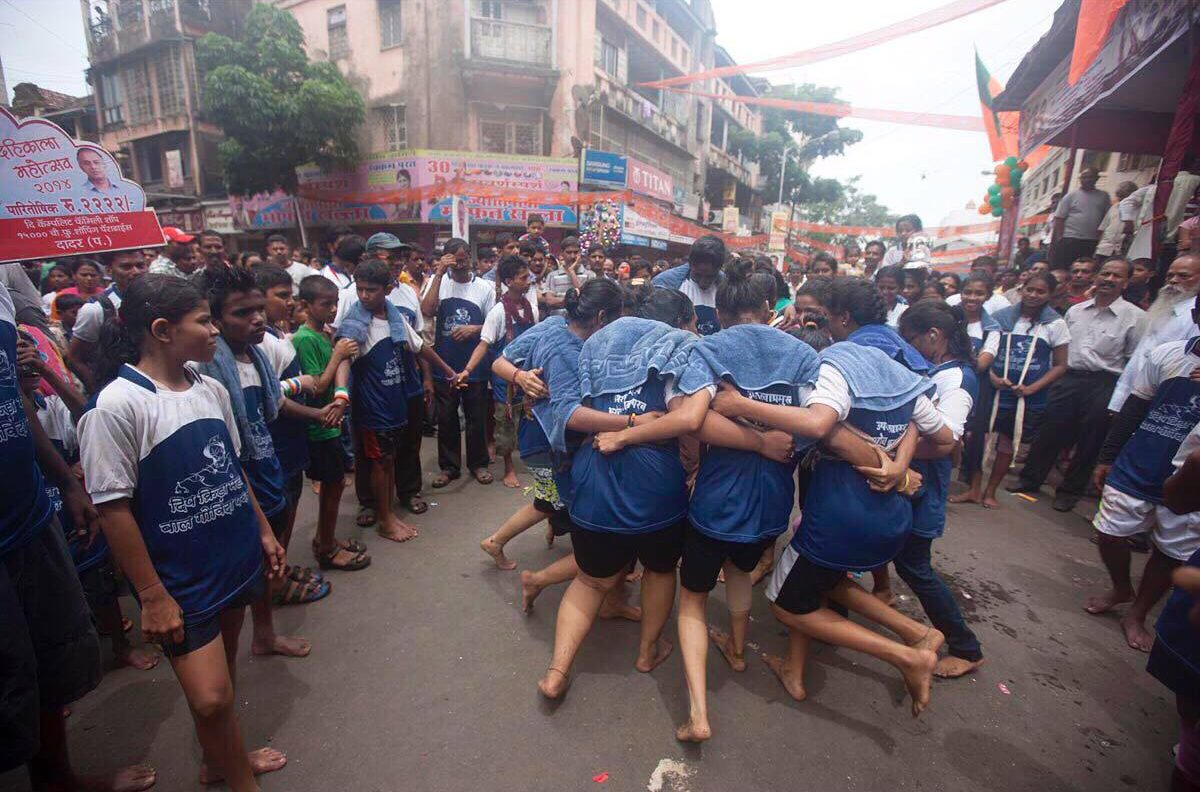 After breaking a pot in Dadar, the girls break into an impromptu Koli dance in the middle of the street. 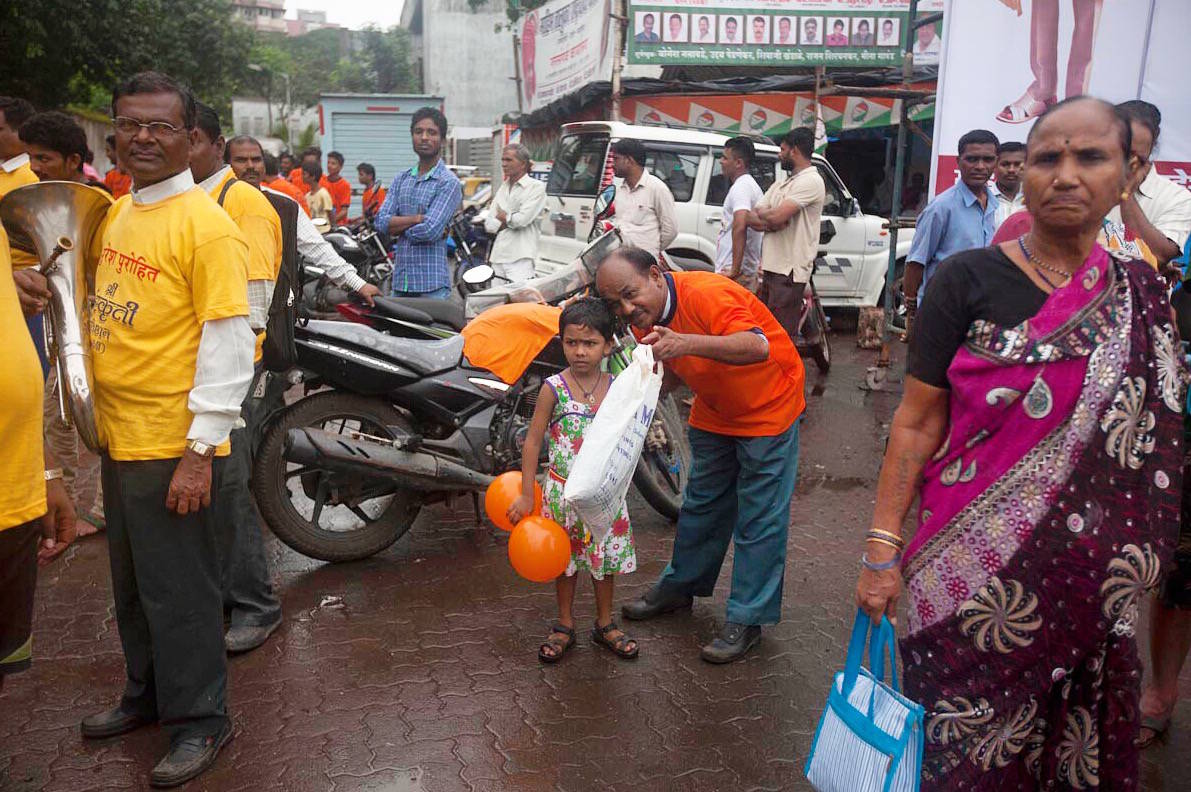 A man points the group out to a little girl as they cross a street in Prabhadevi. 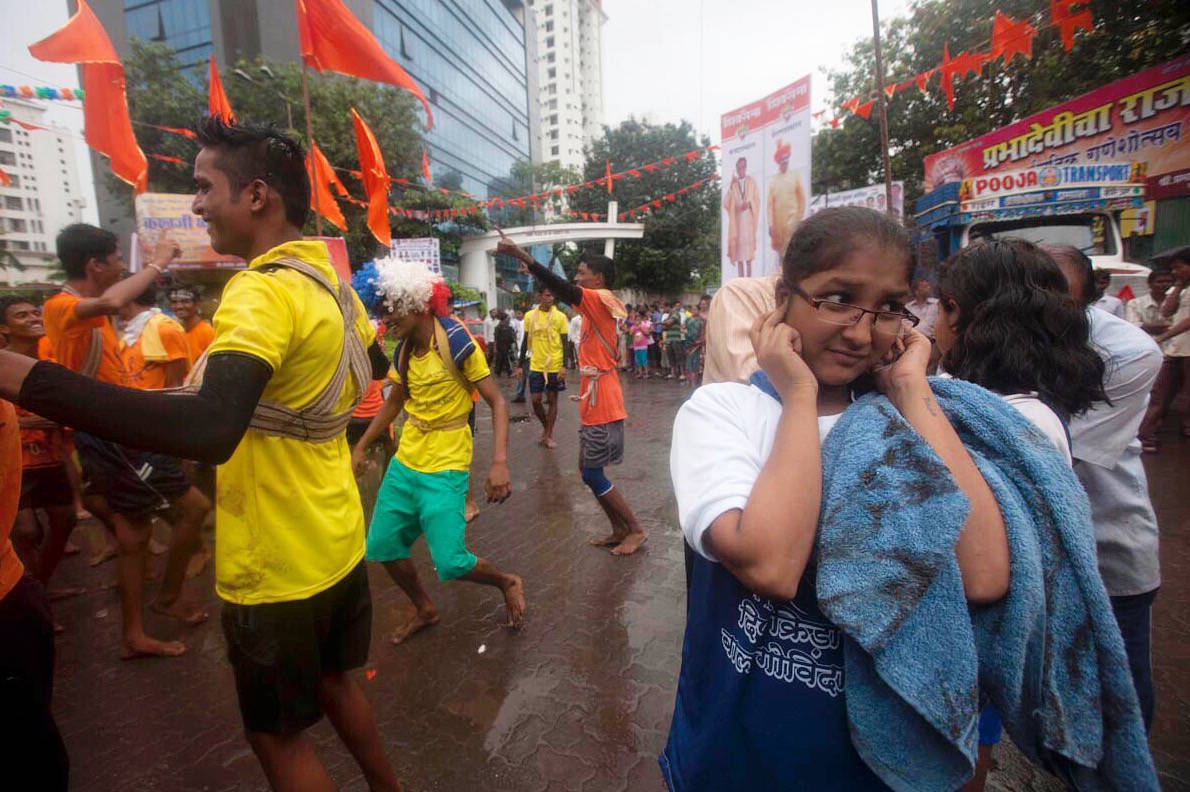 Prerna Kandhare covers her ears as she passes by a group of Govindas dancing in the middle of a road in Prabhadevi.

In the last decade, Janmashtami has gone from being a festival involving neighbourhoods and communities to one flexing political muscle with sponsored t-shirts, giant hoardings of politicians, and extra-loud DJs. The number of govinda groups in the city has multiplied, and their performances now include an odd feature; pyramids formed in “Salaami” or salutation to the organiser for a small sum of money, instead of breaking a pot. On this trip, the girls only broke one pot; the rest of the pyramids were salutations across the city. 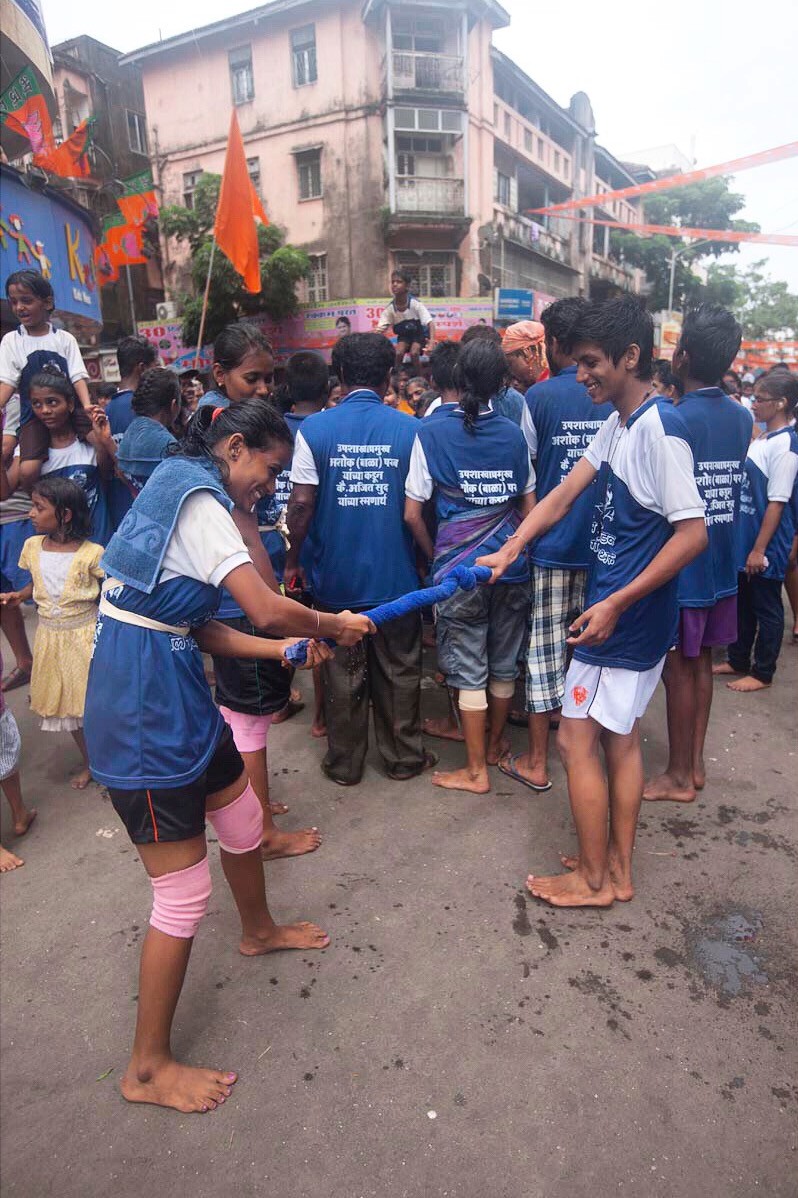 Squeezing water out of a towel, soaked by people throwing water on the participants. 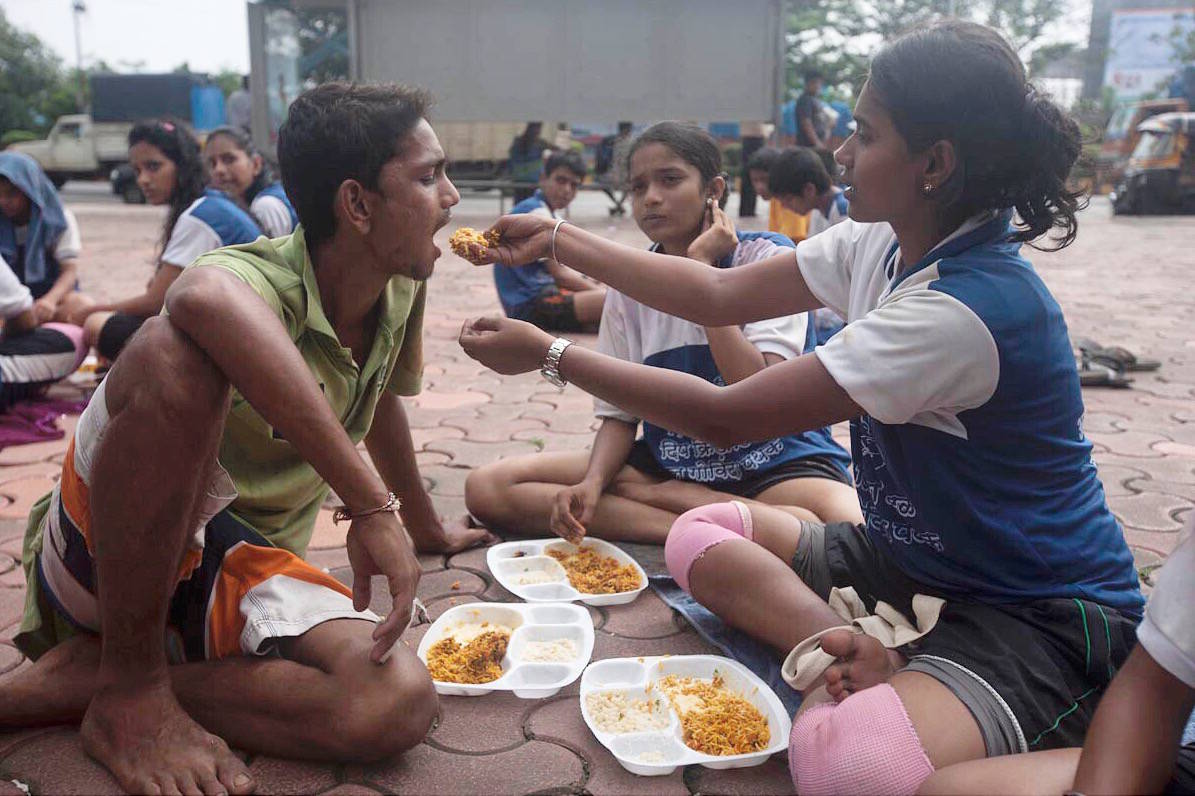 A member of the group feeds her brother during a halt for lunch at Bandra Kurla Complex. 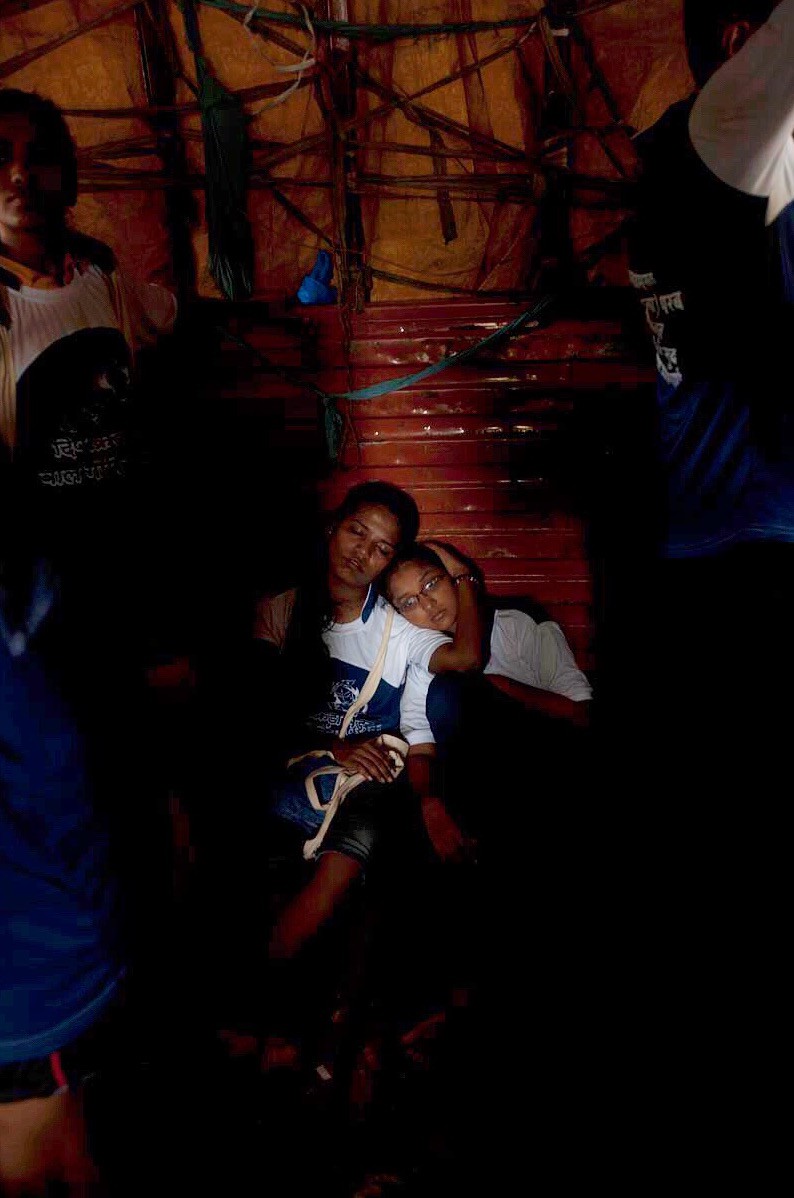 Heading home after a long day, Prerna and a friend squeeze in some rest.

For more photos of the “girl govindas”, check out the @asiaartproject Instagram feed being curated by Uttamchandani this week.