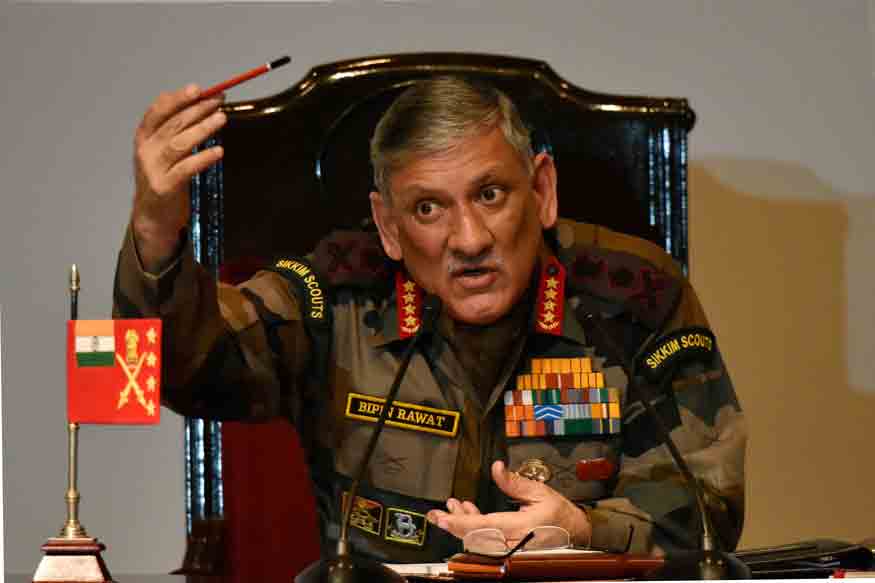 In 2014, Air Force Chief Arup Raha said that women pilots were not suited to fighter jets. I had argued back then that he was right, women wouldn’t be able to fly fighter jets. Until they trained for hundreds of hours. Just like the men. But I also tickled myself with preposterous things people could have told the child Arup Raha warning him off his Air Force dreams. “A teacher telling 10-year-old Arup Raha when he was in Sainik School, Purulia that Bengalis famously disappear in airplane crashes so he shouldn’t dream of flying. Or some hard-ass, reality-loving trainer at the National Defence Academy, Pune telling an 18-year-old Arup Raha that he shouldn’t join the Air Force because that would distract him from his cultural heritage of writing poetry or singing Rabindra Sangeet.”

I wish my flights of hyperbole had been as enjoyable as Army Chief Bipin Rawat’s recent flights of logic. On December 15, in an interview with the TV channel News18, Rawat stated his many opinions about women while deploying a Trumpian syntax. So many opinions that it’s hard to decide where to start discussing them.

Back when Arup Raha’s hot take was the subject of many hot takes, a serving major-general was quoted as saying, “As a society, we are not ready for our women in combat roles. What if they are taken PoWs?” Rawat has similar concerns and is worried that women would die. The most touching illustration of mortality that Rawat could come up with? He said, “A lady who died was in service for 7-8 years. She has a kid of 2 years. He is in Delhi or Chandigarh and parents are taking care of the baby. So what I am saying is, now do you think we are ready for this?” One can only guess that the ‘he’ in Delhi/Chandigarh is the father of the child. What is clear that Rawat is not ready for the idea that the grandparents are taking care of the baby. That’s just too negligent of the dead mother. On the other hand, Rawat also feels that women cannot be made commanding officers because then obviously (obviously!) they cannot be given maternity leave. For the record, women in the army do get 6 months maternity leave (men get 15 days). Rawat is the human incarnation of the aphorism that society wants women to work like they have no children and look after their children like they have no jobs.

Rawat agreed with the News18 interviewer that women could and do die in other situations such as road accidents but he felt the nation was not ready for women to die in combat, to return “in body bags.” Rawat and the rest of the leadership of the armed forces in India have no issue with women dying every week if they are non-combatant residents of the North-East or Kashmir or even baby girls like Heeba, 19 months old and severely injured by pellet guns. For that matter, we don’t need to face the army and its cloak of patriotism to become an unworthy dead girl. One could just stay at home and be killed by our husbands. As a 2017 British Medical Journal study indicated domestic violence was found to increase the risk of death in Indian women by nearly 40 times than among American women.

While we are on the subject of American women, I have to share the amazing stream-of-consciousness style anecdote Rawat narrated about doing a course in the US and how he had to change for the gym several times a day in unisex locker rooms. “I did a course in US. We had 4 ladies and 10 male officers. So what happens is after every 3-4 hours you get a break of 1 hour in which you are supposed to have your lunch or you can go to the gym. Now when we go to the gym, we all change in the gym clothes in classroom all of us. When I was new, I would look the other way because ladies were also there but that is the culture there. They do it… then even in Delhi, ladies tell me that people peep. I am talking about isolation situation when she has 100 jawans around her but it happens here also in Delhi.”

The mash-up soundtrack for Rawat’s life-changing event is a combo of maami saying Shiva Shiva and Victorians looking for sofas to faint on. Has Rawat not been living in India where people find ways to change in close quarters all the time without shaming each other – from temple ponds to railway waiting rooms and handkerchief-sized homes? Has he just stayed in that American locker room all along? But really what is the point of applying logic here? You can only survive watching this interview by periodically surfacing, clutching your hair and exclaiming, “Who is this guy?” The answer to that question is this. Rawat is the guy whose mind when asked about women in combat, races to the Savita Bhabhi style scenario. He says, “now what will happen if there will be a lady officer here. Our orders are that a lady officer will get a hut in the COB, then there are orders that we have to cocoon her separately. She will say somebody is peeping, so we will have to give a sheet around her.” You know what, let’s make the best of Rawat’s thinly-sketched fantasy because sexual harassment in (and by) the armed forces is a giant issue, around the world. True to form, Rawat’s ‘solution’ has so little bearing with reality that I am willing to bet that Rawat is one of those men who does not know the price of toothpaste or milk and goes everywhere without a wallet. Because he doesn’t need to. You have to hope that some unsung hero/heroine somewhere is figuring practical solutions for complex or simple problems the army is dealing with.

I have never understood why any woman would want to join the armed forces but women do all the time, all around the world. Those who want to join the Indian army in combat positions might want to consider the career risks they face not from the enemy but the friendly fire of the high command. What leadership Rawat is offering to the men and women who currently work under him seems as thin as that imaginary sheet in the imaginary hut. Because in this interview as soon as he is confronted about his sexist assumptions Rawat promptly absolves himself and blames the sexism of the entire military machinery on the purported parochialism of the soldiers. He said, “Even today our jawans come from villages, so that acceptance will take time.” Now that move is what they call in military parlance, goli dena.