On April 28th, India’s leading online women’s magazine The Ladies Finger (TLF) presented their first edition of a unique series of events – Leddis Night! – an all-women performance night at The LaLiT Ashok, Bangalore with a Sridevi tribute theme. This truly ‘ladies night’ concept included an all-women audience of 500 women in various Sridevi avatar costumes and an all-women line-up of standup comedians, theatre and dance performers, as well as a female DJ, bartender, waitstaff, and even a female bouncer!

The headliner for the evening was India’s most honest and prominent standup comic Aditi Mittal, and the crowd was chanting her name at least a half hour before she was due. The first time I ever spoke to her was over WhatsApp, and I was quite thrown when she insisted on calling me “Miss”. When I finally met her, I realised that’s just how she addresses women. And despite having seen her various performances, I only realised later in our subsequent Skype interview that not only is Miss Mittal fiery and fierce, her wit also relies on warmth and a degree of unusual humility as well. We spoke at length about the experience of performing to a crowd of 500 women in India, why women’s laughter makes men nervous and how the standup scene treats women. Edited excerpts:

Why were you so keen to perform at an event like Leddis Night?

I was very excited to do this show particularly because it was an event by The Ladies Finger. TLF is responsible for my education as a feminist. I remember reading the words “kranti vanthi” on the header of the site when it was in beta version and thinking “oh lord I bet they’re up to some shenanigans, how do I get in on this.” Lets just say that I would have been super sad if TLF had an event and I wasn’t involved at all, so I’m thrilled right now 😀

What was it like to perform in front of 500 women in the throes of riotous laughter?

I’ve performed in front all-female audiences before. There’s a property in Bombay that does it called FemaPalooza, and many years ago, I ran a ladies-only open mic called Bras Before Bros (because alliteration is life). But what happened at Leddis Night was an unforgettable party! Women-only crowds just get it, and it’s easier to laugh when you don’t have to look around to see if there’s a man next to you who is paying attention or not, or is judging you for what or why you’re laughing at something.

For me, it’s just the fact that auratein – chappal nikaal ke – will put their feet up on the chairs in front, pallus will be all awry, dupattas will be on the floor, we’ll openly snort away as much as we want without the general propriety that keeps us from expressing ourselves with too much happiness when we find something funny. 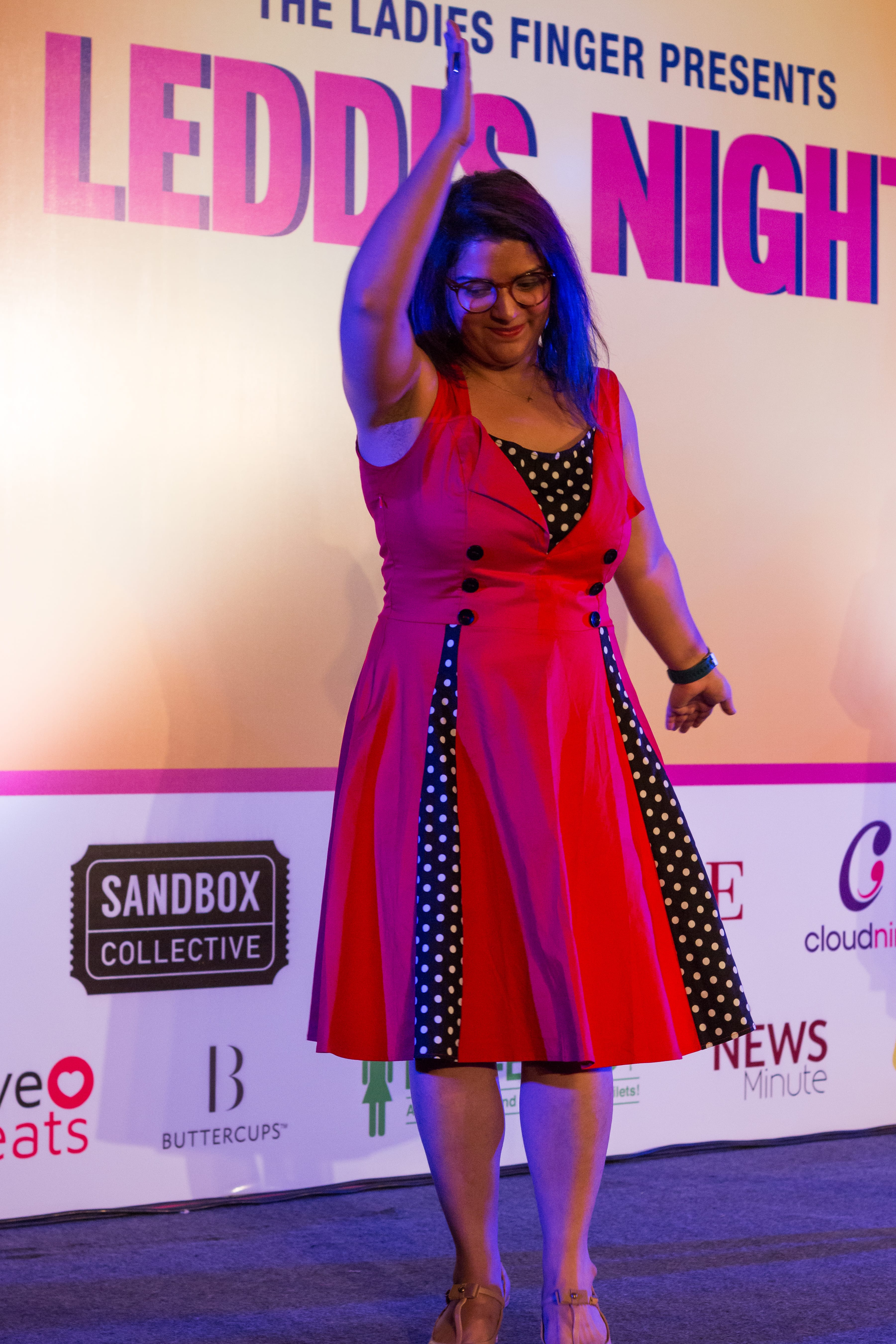 On the topic of women laughing…did you follow the Renuka Chaudhary incident in Parliament recently?

Yeah, I’ve realised women’s laughter is threatening to the world in general. There’s that quote: “Women are afraid that men will kill them and men are afraid that women will laugh at them.” Unfortunately or fortunately, we live in a society where the simple act of a woman having to breathe is considered political. And that’s why in a world where a woman laughs, I think it’s a subversion of the culture that promotes her propriety as her value. We’ve constantly had this culture of secrecy around our laughter, where in our stories, our movies- a bunch of girls will be giggling and the dad will lower his glasses and say, “What are you girls giggling over there for?” And all the girls will be like, “Nothing papa, hee hee hee.”

As we grow older we’re constantly running off into bathrooms, and the toilet trips that girls take together all the time is literally us wanting our own space away from the main table where the conversation is dominated by men. In the toilet is where we go to guffaw, giggle and snort in private at stories we are told don’t have space on the main table.

The culture of female laughter has been very private for a very long time, and it dazzles me a little bit because 50 percent of us are women and our laughter should be as mainstream as anything else. I think the backlash against women’s humour entering the mainstream has resulted in stereotypes like, “Oh my god, women are not funny.” People are constantly saying to me, “Are you a female comedian” and I’m like, “I’m an observational comedian or a political comedian.” You can’t put a genre of comedy  in my pants. 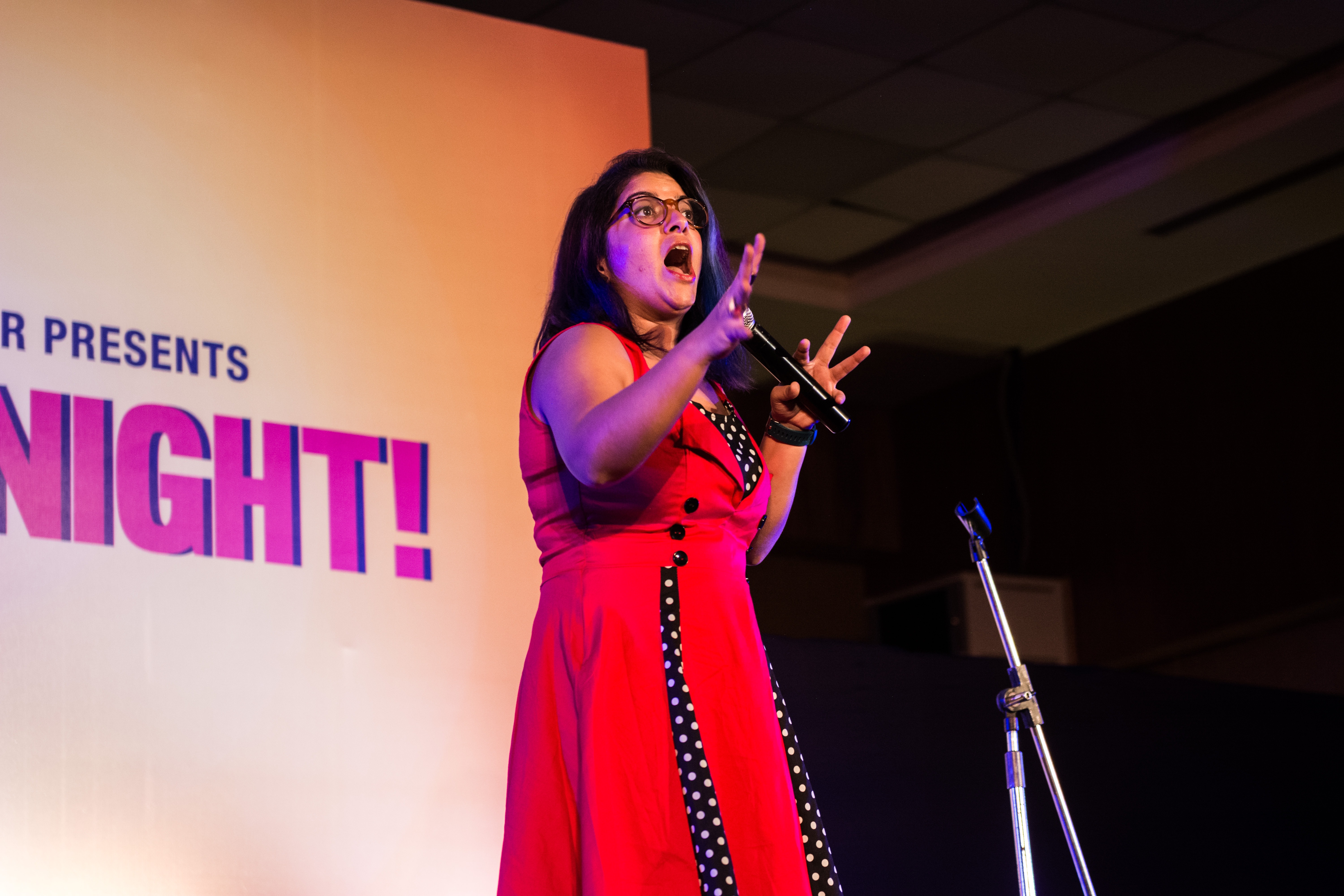 What advice would you give to young women who want to write funny material for YouTube or television or stand-up, but don’t know how to get started?

First, you may not have friends who are into the same thing but in terms of just physical access, if you belong to a certain caste and class, you have that. And if you’re in that position, then it’s just a question of DOING because the only way to it, is through it. Nobody was Johnny Lever or Shobha Khote on their first try.

Also, we’re still in a relatively democratised state when it comes to online stuff. I’m not saying 100 percent but relatively democratised. So you have no excuse. Because you have Twitter, you have YouTube. You have all these channels of  disbursement available to you. In this method you either- use you content to show prominent comedy companies as a resume, OR you just use your content on these channels to build your own audience. The second one is longer and more painful clearly, but the rewards are higher.

Second, if you ARE approaching an established comic for advice make sure its specific to you. Carpet bombing 300 peoples inbox with “I want to be a comedian, how can I?” will get you zero responses back. Asking “well, I’ve done 5 open mics so far, but I think I might be lacking in XYZ dept. can you help?” Is more likely to get a 100 people wanting to help you because they see how you’re helping yourself.

And third, please trust the women who came before you. Because we as women have been conditioned to not share our stories openly, we often think we are alone in whatever we are going through. Almost every young woman I know is confident ki nahin nahin, mere saath toh alag hoga, main toh alag karungi, main toh sab ki tarah nahin hun. Each one of us is made to think that the patriarchy will be kinder to us than it has been to other women. I know this because till 8 years ago I was this person. This, I must say, has been an incredible waste of time and an incredible waste of resources to learn the same lessons that someone has learnt and was trying to tell me. Learn to trust the women around you. Realise that there is space for more than one of us. Claim your space.

People keep saying, oh the industry is improving for women. But is it really?

At the performance end, I think things have improved as there are a lot more women on the getting on stage now. But at the audience end, we’re still seeing very low numbers of women as audience members.

That’s why I appreciate the outrage at the journalistic level of the lack of women in comedy, but if you’re going to leave a handful of women only talking to audience fulls of men, the journey is going to be a LOT longer than it can be.

Even now, when journalists call up, they’ll always call three people: me, Neeti [Palta] and Vasu [Primlani]. There are so many new comedians. There’s Jeeya Sethi, Sonali Thakker, Punya Arora, Prashasti Singh, Pavitra Shetty, Riddhi Singh, Sumukhi Suresh.  These are very funny, smart women who do shows. But when I give journalists the numbers of new comedians, they’re like, Nahin, tumse hi poochh lete hain na? I’m like, then you’ll keep profiling me as the only fucking woman in comedy. It’s going to be good for nobody. I mean, if you asked me “Have things improved?” and if I’d said ‘Yes’, then why am I still the one being profiled? Shouldn’t there be someone else in this fucking seat right now?

You mentioned a bunch of new comedians on the scene. Is there a sort of community of performers banding together?

Among the women, yes. That’s why I mentioned the third advice about trusting women. It’s based on the fact that there are more of us. Jeeya Sethi an upcoming comic is  also a producer and runs her own comedy show production company called “Comedy Ladder.” Every comedian, Male and female wants to be on her line up, she’s strict about work and therefore runs GREAT shows! Before that, there were no female producers. There were no women who were running a room. All the men had the access to all the stage time. You had to suck up to the right men to get access to five minutes on stage. You had to high-five the right dude, irrespective of what you’d heard about them or how they’d behaved towards you, to get 5 minutes on stage. With a room like Jeeya’s you realise you just have to do your best, not worry about schmoozing. Things have changed.  The moment you have that sense of solidarity, that sense of shared experiences, suddenly you’re not crazy [as they often try to make you believe], you’re right for feeling the way you’ve felt. Your stories are valid, your feelings are valid, who you are is valid. That sense of solidarity is the best thing.

This is why I protest when people say “female” comedian”, because then I know this will happen to someone else. If anything, what this has taught me is that if you are going to blaze any paths, you make sure the grass doesn’t grow back. You forge that fucking path and you fucking put concrete down on it so that when people walk after you, it’s a fucking breeze for them. They’re not making the same shitty mistakes, they’re not having to deal with the same crap you’re dealing with.

One of the things I remember is how fearful I was. Out of the seven years I’ve done this job, I was in a deadlock of fear for a good two years where I was too paralysed with fear and self doubt. I realised I didn’t have any outside support. No bros were sitting around to elevate me. And I wasted that time. I’m so regretful that I feel like all this stuff that I’m writing right now, I could have been writing two years ago. But I’m not wasting anymore time. Onwards and upwards. It’s time to run, stumble, fall and fly towards the ever next laugh. I am here to do that.

For Once, (Some) Indian Comedians Had a Sensitive Conversation about Sexism in the Industry

One Response to “‘You Can’t Put a Genre Of Comedy In My Pants!’ Aditi Mittal on Why the Time for Women’s Laughter is Now”