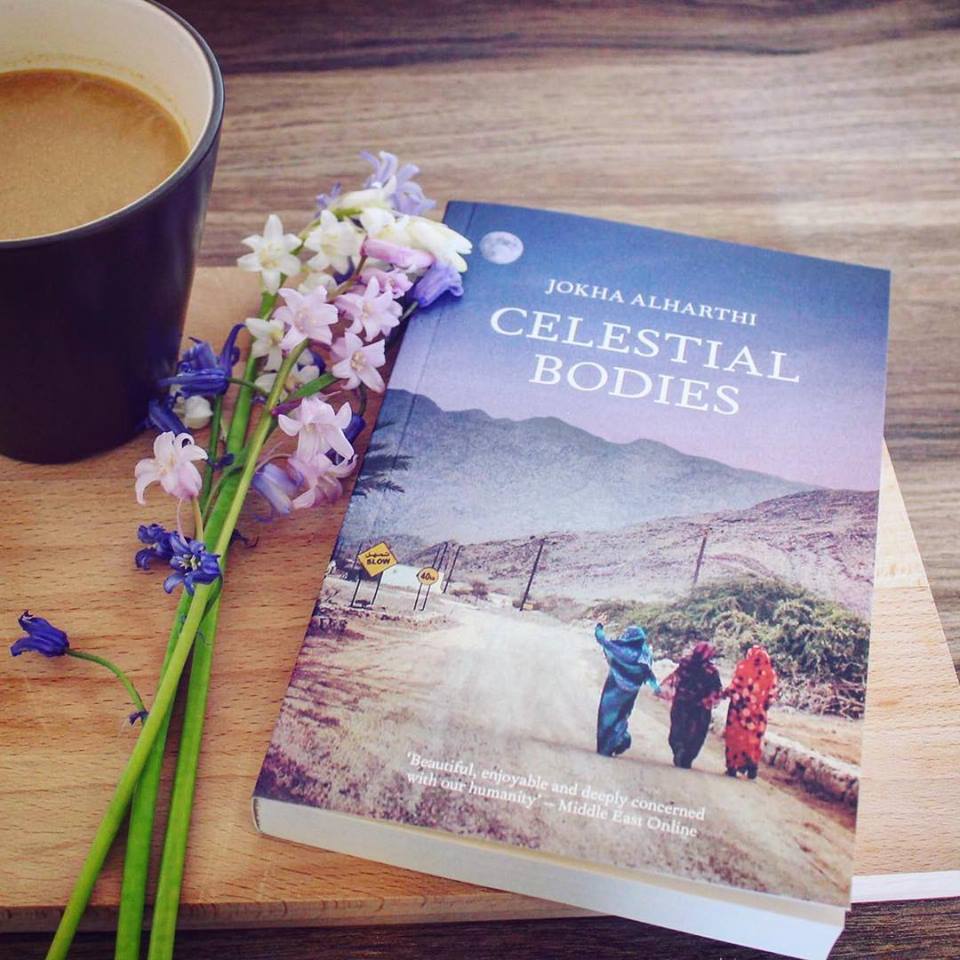 My schoolmates and I read the news that Jokha Alharthi had won the Man Booker International with a thrill. At last we could read about our childhood home Oman in a novel, we texted each other yesterday. We left school in Muscat a couple years before the Internet so all we knew about Oman when we lived there was from the heavily sanitised newspapers, a rare book or two by foreign writers, the rumour mills and of course Oman’s own self-fashioning propaganda machinery.

My father likes to tell this argument he overheard between two patients in his waiting room. The Omani patient apparently had been going on and on to the Egyptian in the next chair about the greatness of his culture. He was spouting the version we all heard every year on July 23. Renaissance Day is the anniversary of the day the current Sultan began his rule after a coup d’etat against his father and as we were all reminded the ‘beginning of a glorious era to build a better life for citizens’. The Egyptian had been biting his tongue as immigrants often do. Finally exasperated, he snapped, “My bathroom is older than your culture, okay?” I felt optimistic when I read that Alharthi was a resident Omani, teaching in Sultan Qaboos University, minimising the chances of it being the sentimental mediocrity Indian readers in English are subjected to from NRI writers. But I did wonder whether it would be heavily caught up in the nationalism project.

Oh how wrong I was. Celestial Bodies is the first author from the Gulf to win the Man Booker International Prize. Alharthi is the first Omani author ever to have her novel translated from Arabic into English. All those firsts apart, it is a sophisticated novel drawing from an ocean-deep literary tradition. Celestial Bodies is full of the classical poetry Alharthi has a Ph.D in. It has barely two paragraphs of explanations written for the dying-to-be bewildered Western reader. Which is not to say that the book doesn’t have any inadvertent gimmes for my schoolfriends and me. Here are a few shout-outs for the benefit those of us who lived in Oman in the period of this novel. Forgive us, Ms Alharthi, as you write another accomplished novel. Nido milk powder tins. Teenage boys being followed in fancy cars by scary older boys in Qurm. Feeling like Al Khuwair is only for people with cars. Egyptian schoolteachers. Indian women working in the hospitals (Hi!). Omani halva that for some reason the excellent translator Marilyn Booth calls jelly-sweets. Shouting ‘goooooooooaaaaaal’ at the TV during football matches. Muttrah souq. Tea with saffron. Hearing about friend’s friend who died in the flashfloods. Boys with white kummahs on their heads, the kind that my mother embroidered occasionally for a hefty fee. Listening to the oud. Hearing about the friend’s friend who was raped and finding nothing in the papers. Rejecting dried dates for fresh dates. Suntop juice.

Having gotten that out of the way here is to the main business. Celestial Bodies tells us about the massive changes that Oman saw between the early 80s and the early noughts and how the arrival of oil money affected people across class and ethnicity. It talks about love, sex, ambition, pretension and grief. With near-perfect control she takes us from young Mayya at her sewing machine in a tiny town to Abdallah who falls in love with her to Abdallah in the future looking back at their daughter London when she splits from her abusive boyfriend to Mayya’s mother Salima and her childhood as a dependent niece in the house of the rich and cruel relative to the life of Ankabuta, mother of the slave Zarifa who brought up Abdallah, who also lived in the house of the cruel relative to the suffering of the younger brother of Najiya, the business powerhouse Bedouin that Mayya’s father falls in love with. I did see a whiny short review in The Guardian, which said, that it’s difficult to “unravel all the bewildering inter-relationships.” I disagree. Alharthi makes the unraveling very satisfying.

It’s only in the last few years that I have learnt about Oman’s slave-owning past. I certainly heard nothing of it while living there. Knowing about it didn’t quite prepare me to read about it in this book. Al-Harthi’s approach is one of neither valorizing the slaves nor burnishing the slave-owners. She just takes you along when she flashes from Al-Awafi, the town where Abdallah and Mayya grew up to Kenya where Ankabuta’s father was kidnapped or into the slaver ship in which Zarifa’s husband Habib was stolen from Balochistan. I imagine that few privileged writers can manage as Alharthi has to resist a declension narrative where somehow the slave-owning past was beauteous and alas now the sheikh has no one to press his once-mighty ankles. She resists torture porn and lightly embraces the banality of evil.

Here is an early para when a central character Abdallah remembering his father Sulayman and his daughter London. “He went on shouting, in one of these bouts of raving that took over his mind for most of the two years before his death. Boy! Boy! Tie Sanjar up, tie him to the column on the eat side of the courtyard, out there, out in front of the house. Anyone who gives that slave water or shade has to answer to me. I knelt down beside him. Father, the government freed the slaves a long time ago and then Sanjar went to Kuwait. (Every summer London would say, Papa, let’s visit Kuwait. But Mayya always rejected the idea: So we’re going to get away from this heat by escaping to somewhere hotter?)”

London, Sulayman’s granddaughter, is not preoccupied by slaves and wants a pediatrics degree from Canada, a BMW and true love. But her Muscat contains the children and grandchildren of former slaves making their way in the world, remembering and forgetting their ancestors kidnapped from Kenya and Zanzibar and Baluchistan. It contains the children and grandchildren of those who mounted armed rebellions against the Sultan and the British. Alharthi’s whip-speed disturbs you in a way that an epic sprawl may not be able to. In a non-pedantic, wholly interesting way Celestial Bodies shows you also what is remembered and what is forgotten in a ‘new’ nation.