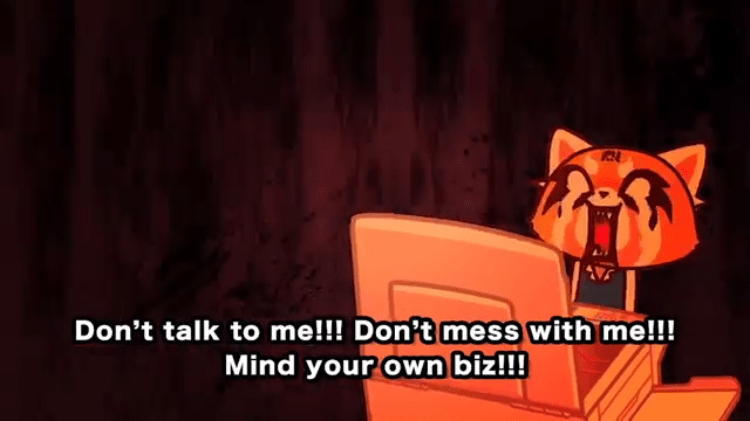 Maybe we’re a little late to hear about Aggretsuko, but my aunt just told me about her. My friend has been calling the red panda her spirit animal ever since, and another friend was so excited about her that she launched into a long explanation about how metal music has actually helped her hate her boss a little less.

Aggretsuko is Sanrio’s (who came up with her extremely popular predecessor Hello Kitty) new animated series. Her name is a contraction of Aggressive Retsuko, and apparently the character on her forehead translates to “violent, extreme, furious”. This red panda works in the accounting department of a company in Tokyo, and from the first introductory video to the series, we see Aggretsuko travelling to work on a jam-packed train, only to be surrounded by colleagues dying to show her photos of their baby nephews and children, and have her boss pile her with a ton more of work just when she is about to leave at the end of the day. Each time the rage builds up in her head and she turns red, with teeth bared, and it ends with her going for karaoke and singing metal music about how much she hates everyone.

Of course I went on a spree watching a bunch of these episodes. They’re all about a minute long, and seem to have everything. In the second one she feels rage towards the colleague dying to show her baby photos while she’s trying to work. In another episode, her colleague has come home for a bit, but she refuses to leave and keeps watching TV. Aggretsuko erupts in rage again. There’s also an episode where she’s trying to console a colleague who is whining about everything in her life (how she doesn’t look good and is terrible at making conversation), and Aggretsuko, in her moment of rage, wants to yell at her to stop demanding pity. Even if I never want to admit it, I have felt this sometimes.

And while I’m completely fascinated by the show, the more unsettling part is that the rage is all bottled up, and we’re just wondering when Aggretsuko really explodes, rather than only exploding in her head. What does it mean that a lot of women are identifying with her?

For 12 Years, This Japanese University Has Had One Mission: Fewer Women Doctors