Some months ago, I was shuffling the books on a shelf in our little odds and ends room when I came across Marie Kondo’s The Life Changing Magic of Tidying Up. I had bought it in the great Kondo fever of 2016 with the intention of changing my life and it had joined the list of things not read and totally forgotten in the clutter that is really a third living entity in our house right now.

I thought I should de-clutter some stuff. I then looked at the stuff in that room and the next and the bedroom beyond that and looked down at the book and thought I should tackle my inbox first.

I pulled up all the offenders – mutual fund newsletters, banks in which I no longer have an account, newsletters, UEFA mailers (how on earth?), Lebanese food blog updates, Harper’s – and happily hit delete, unsubscribe, get out of my sight, I don’t want to see you again.

And then I saw the Goop newsletter.

I think I was an early adopter of the Goop newsletter. I had sunshiny memories of Gwyneth in Shakespeare in Love and Possession and I was at a vulnerable moment in my life when it first started so I felt I could do with some sunshine in my mailbox once a week.

It all started out so well. There were nice vegetarian recipes and tips on what to see in Tokyo.

Then the merchandising crept in with the vaginal steaming, the jade eggs, and the gazillion dollar toilet paper; a mountain of bullshit was clearly eclipsing the sunshine.

I waited for a bit for the sunshine to return. But there was no Gabriel following the instructions of God and making the moon smaller so that the sun could shine brighter.

So, it was without much regret that I hit the unsubscribe button and Goop vanished from my life.

Around this time, the following tweet about Shihab al-Din al Nuwayri’s The Ultimate Ambition in the Arts of Erudition appeared on my timeline.

Exciting title I thought. And the book lists the various types of night as classified by the Bedouin? It fired up my soul.

So naturally, as follows most things I do in life, instead of Kondo-ing and reducing the number of books in my house, I added one more, ordering the al-Nuwayri.

I plunged into it the day I got it. 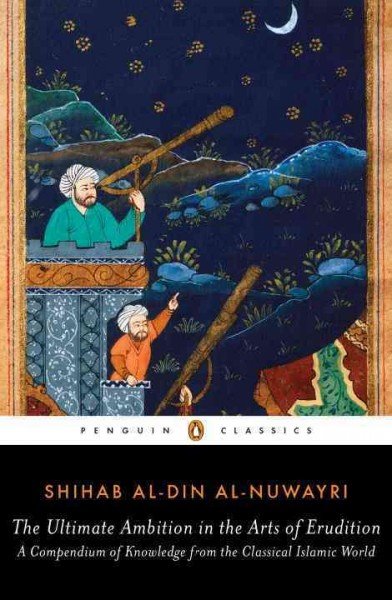 As I rolled through the introduction, I knew this book was a keeper. For the unfamiliar, The Ultimate Ambition in the Arts of Erudition was al-Nuwayri’s life’s work. It’s subtitled, “A compendium of knowledge of the classical Islamic world,” and it’s exactly that – a giant, multi-volume encyclopaedia, a World Book for the 14th century from the Arabs point of view. I realised that World Book itself has now become a dated historical reference, as sepia-tinged with old-timeyness as al-Nuwayri’s work. I should have said it was the 14th century Arab Wikipedia in the form of a book.

Al-Nuwayri was a Mamluk Empire civil servant, working mainly in the financial administration. This was an immediate personal boost since it showed that office drones like myself could create works of classical literature. He was also a soldier in a few border wars between the Mamluks and the Mongols, so he wasn’t just a paper pusher for most of his life. As someone who has scars from various intra-departmental battles over who has responsibility for what function, I recognised a fellow scrapper in al-Nuwayri.

My affection for al-Nuwayri deepened as I read through this excellent translation, which is just a summary of 33 volumes he actually wrote and published. He doesn’t speak much of himself but I suspect he would have been one of those quiet guys at parties standing in the corner mentally taking notes about all the attendees. If he lived now, his Insta would have been an exhausting catalogue of the minutiae of modern life. He’d be the person who instead of photographing cats would be photographing the Instagrammer photographing the cats and then classifying them.

I am sure once his multi-volume encyclopaedia had been published, conferences and durbars around the Mamluk Empire would have had at the minimum one pompous ass quoting entries verbatim by al-Nuwayri. Someone would have shown off all the names Arabs had for dust (five in total). Of course, if al-Nuwayri lived in modern-day Bengaluru, he would have also listed the dust stirred up by water trucks and BMTC buses and scofflaws riding their two-wheelers on pavements and dogs walked by houseboys.

I chuckled through the bits of the book about nationalities (of course Egyptians got the best qualities since al-Nuwayri clearly appreciated his pension) and the bits about the stars and the moon and the sun were enchanting. Full disclaimer: That bit about God and Gabriel and the sun and the moon I mentioned earlier is from the book.

The book also has loads of erotic poetry – about the loved one’s cheeks and buttocks and eyes and face. This is in the section titled “The Life Stages and Nature of the Human Being”. Al-Nuwayri usually doesn’t comment on the various personages whose own works he quotes in his book – but apparently, he couldn’t refrain from editorialising on Imru al-Qays who replied when asked what happiness was: “A delicate maiden burning with fragrance, burdened by ample curves.” Al-Nuwayri offers a subtle burn: “Al-Qays was infatuated by women”.  So, in this way we know what our man would have been posting on Twitter as well: crisp, to-the-point put-downs.

Of course, not all things are perfumes and roses. The bits on barely concealed desire and panting descriptions of breasts are immediately followed by all the various ways in which to flay and kill those who break the law on extra-marital and homosexual loving. While these are gruesome, the juxtaposition underscores how al-Nuwayri and the wider Arab world of the 1400s didn’t seem to stress out too much on what went on in the bedroom. You could have your missionary position puritans, who enjoyed flogging the strays, but there was also widespread appreciation for male beauty by male poets  (“His face like a full moon/ With a gazelle’s eyes”) and you could almost feel the shrug that al-Nuwayri must have given as he catalogued this pre-Kinsey compilation of human desire.

A whole section of the book is dedicated to sexual medicines.

It kicks off with a recipe to increase the size of the penis and improve its appearance. The recipe calls for grilled sea onion and euphorbia. This smells of utter hokum. Any onion, land or sea, would raise a stink, especially if, as the recipe instructs, you have to leave it on overnight. Also, I have a couple of euphorbias in the garden and I don’t know which part of the plant you’re supposed to include in the recipe, but if it’s the thorny stem, may Allah be with you.

Then, of course, there are the various outlandish schemes to tighten the vagina.  Al-Nuwayri may as well have been trolling his reader: “Seriously? You believe this can be done? Well here’s what you need among other things: Scorched jackal skins and goat and donkey hooves. No jackals where you live? Get a hold of some musk sukk. I don’t know what that is, but since you specifically came to this chapter I have to give you the goods.”

And here, I must say that Goop was infinitely more believable with its jade eggs. In fact, those spam phishers with their penis enhancement supplements would be more reliable. None of the schemes in this section are workable.

Also, the man al-Nuwayri quotes here – Abd al-Rahman ibn Nasr al-Shayzari who insists that men can achieve perfect sexual pleasure only if a vagina is tight, warm, and dry – is a moron.

This part of the book – on aromatics and sexual medicines – is redeemed by a practical (by his standards) recipe for eliminating armpit odour that should be given out free in the malls and theatres of Bengaluru.

Even though I finished reading it weeks ago, I still keep al-Nuwayri’s book on my desk because when I am feeling a bit low I can just randomly open a page and there is something that will fascinate me or chase my blues away. My favourite section (I hear you ask how can I pick a favourite with all this rich material, but I am human and flawed) is the one “On the Mute Beasts”. There are entire passages on lions and mules and giraffes and lizards that have caused me endless delight.

But what stuck with me most was the description of the Egyptian Mongoose. Its fart, al-Nuwayri describes in detail, has a horrible smell that settles into clothing and won’t leave until the clothes have worn out. Much like Bengaluru drains.

The mongoose fart is so potent that it can disperse large herds of camels. The Bedouin, those clever people, observing this, coined a proverb for the dispersal of groups: “The mongoose farted among them.”

When Thanos did his thing and (spoiler alert!) half the Avengers disappear at the end of Infinity War, I waited for the silence and the sombre music and the sobs of children in the theatre to say: “The mongoose farted among them.”

What, asked my sister.

Saudha Kasim is currently trapped in a cubicle in Bengaluru where she indulges in cloud fishing, passive-aggressive battles on Skype and rating the various types of sambar the canteen serves for lunch.

Maggots, Murder and Mystery: Anita Anand, William Dalrymple on the Bloody Journey of the Kohinoor