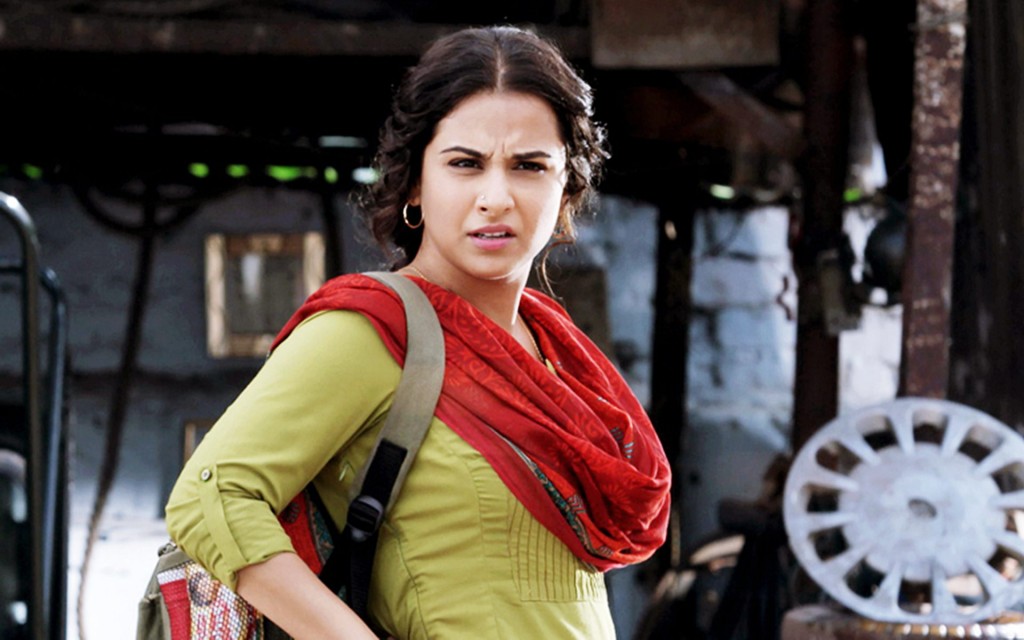 Bobby Jasoos passes the Bechdel Test, simply because, refreshingly enough, so much of the film’s conversation is about her work. And so many of the film’s characters are women. In fact, as a friend pointed out after the film, very little attention is paid to the heterosexual romance plot. Bobby’s love interest even accuses her of viewing everything – including their romance – as a “case”. In short: all the bare bones of a juicy female detective story are here. As we all know, no better turbine exists to drive novels, TV shows and films than a female detective who has no work-life balance because it’s all work.

And Bobby is driven. She generally gets offered “trivial” cases of family feuding in a tea shop, but she wants more. She watches CID on television and pesters a neighborhood detective agency  to hire her. When they refuse, she swears she will set up her own firm in the opposite building. Her competitors have space-age tech and Bobby’s office is a distinctly 90s cyber cafe (CRT monitors!). Here is the catch: her low-tech detection and sunny disposition are as cloying as they are cute.

Can detection ever be this sunny a profession? While it was certainly nice to be spared something like Aamir Khan’s permanent-scowl-SAD-BACKSTORY-method-acting from Talaash, Bobby Jasoos interprets detective work as a series of set-pieces. She mostly traces missing people with an Enid Blytonesque simplicity. Sadly, there is no detective plot without velocity. In spite of Bobby’s ambitions toward Real Vocational Standing, she isn’t allowed to move too far into the unseemly, just a man with a gun that stalks her and fails to be menacing.  Basically: where is the !@#$ing murder?

Contrary to what the film indicates, murder is not the sole preserve of the underworld. Marital unrest and domestic wrangling, stuff mocked by the film’s writers as trivial, form the core of great murder mysteries.

Also, I was never sure why, in a movie with the formidable 80s trio of Zarina Wahab, Supriya Pathak and Tanvi Azmi, we have to spend a whole lot of time staring at a jocked-up Shreyas Talpade doppelgänger (Ali Fazal, who will next underwhelm in Fast and Furious 7). These three ladies are given very little and, more importantly, existentially depleted screentime.

I imagined the three women along with Vidya Balan making an unbeatable detective team, a Hyderabadi Bletchley Circle of sorts. Instead they sit around their houses and we have to endure Bobby’s bland male sidekicks – a waiter, a cellphone shopkeeper and a cyber cafe owner – all huffing and puffing through a rudderless plot.

Lastly, not that is this is news to anyone,  Bollywood still doesn’t know how to dress Vidya Balan. Dirty Picture still stands out as a notable exception. Ghanchakkar decided to turn dressing Vidya Balan into a “clever” meta non-joke with its comically excessive “bad” clothes. All I remember now from the film is a passive-aggression towards non-size-zero body types.

Balan’s dupattas in Bobby Jasoos cover and obscure so much that you can’t help feeling that costume designer after designer is simply afraid of giving her body form. Her colour-burst salwar-kameezes were less about giving Bobby her own style and more about studiously conjuring Hyderabad mohalla atmosphere. In fact, all the Authentic Atmosphere creation was so studious and earnest, it might explain why the plot got neglected.

I wouldn’t mind a sequel – a skilled Vidya Balan managed to hold this film together, somewhat – but somebody has to !@#$ing die in it.

Regardless of What You May Have Heard, Lata Mangeshkar Paved the Way for Women Playback Singers Who Came Later

A Professor and a Student Teamed Up to Track Soft Sexism in Sports Reportage. Any Guesses What They Found?

‘Lie Down With Head Touching the Floor and Drip Liquid Into Nostrils.’ And Other Bizarre Instructions to Conceive Boys

No. of IIT Women Dip So Much That Panel Recommends Quota