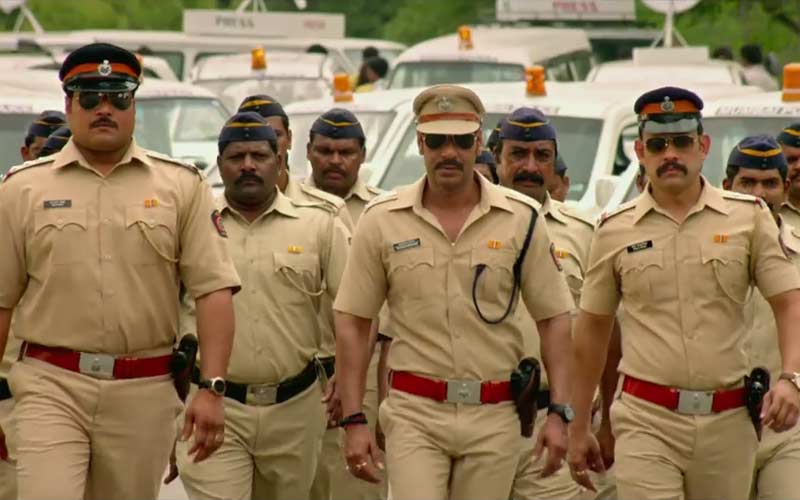 Singham Returns is the sequel to the Rohit Shetty-Ajay Devgn superhit and remake of the Tamil hit (starring Suriya) of the same name, Singham. In the sequel, village cop Bajirao Singham (Ajay Devgn) who had been transferred to Goa, is now the DCP of Mumbai. After defeating a goon-turned-election candidate (Prakash Raj) in the first movie, Singham now faces bigger politicians and a religious guru as well. While the movie remembers everything about the character and his parents, the plot conveniently retcons enough to forget his love interest from the first movie – childhood friend Kajal. While his parents are played by the same actors (thankfully), the village setting changes completely. This time, his childhood friend Avni (Kareena Kapoor) is his new love interest and the girl he is set up with for an arranged marriage. His former schoolteacher runs a political party, his senior at school is now the Chief Minister of Maharashtra, and his former classmate (and Avni’s brother) is now running for elections as well.

Avni runs her own beauty salon and aspires to have at least four branches across Mumbai. She is a woman of ambition with a huge appetite (literally). She is spunkier than Singham’s fiancé in the first movie and a little psychotic as well, making the two quite well-matched. There’s a point in the movie at which her beating up a small-time reporter makes it to YouTube, and everyone calls her Lady Singham. There are other named women characters in the movie, like Neeta Parmar, the TV star who stands for elections (a character inspired by Smriti Irani) and the fiery journalist (inspired by Barkha Dutt), but their screen time can perhaps be counted in seconds, and they have about four lines each. Obviously, none of the lines are said to other women and if they are, they are usually about some man – mostly Singham.

The film was less of a comic book superhero movie than the first one; this one was more like cop porn. Lots of men in uniforms doing the Reservoir Dogs walk to the film’s soundtrack. All the time. What was interesting, though, was that almost every time Singham changed his method of operation, or acted on something, it was because a woman said something to him. Be it Avni, the wife of a dead and framed constable, a slumdweller’s mother or even the journalist who initially hates him but starts to respect him after he uses a law that is supposed to help women (no male cop can arrest a woman) to ensure that a group of women slaps and threatens a villainous politician on stage in front of his followers. But it goes without saying (and still I have to say it): Singham Returns fails the Bechdel Test.

On a completely irrelevant note, Daya from the TV show CID plays a character called Daya (who is mostly a replica of his character on CID) – he received more applause than anything else in the film. I am talking house-full-show raise-the-roof applause here!

I hate to invoke Hollywood, which doesn’t have a great Bechdel Test track record itself, but last night I watched a female buddy cop comedy – Paul Feig’s The Heat starring Sandra Bullock and Melissa McCarthy. Now that’s how you make a cop movie with women.