The Marvel cinematic universe continues to expand at an ever-increasing pace. Thor: The Dark World is the second of the Thor films starring Chris Hemsworth as Thor (Marvel’s version of the Norse God and Earth’s superhero), Natalie Portman as Jane Foster (his love interest) and a host of other stars.

The story is set a few months after Loki’s invasion of Earth as shown in The Avengers, for which Loki (Tom Hiddleston) is sentenced to Asgardian prison. Thor longs for Jane while trying to maintain order in all the nine realms with the members of his trusted team – Sif, Volstagg, Fandral & Hogun. For interested ladies, TV’s nerdy chocolate boy Zachary Levi (Chuck) replaced TV’s ‘charming’ Josh Dallas (Once Upon A Time) in the role of Fandral. Meanwhile on Earth, Jane suffers through heartbreak until she (and her trusted intern Darcy, played by Kat Dennings) finds yet another wormhole, which ends up taking her to a dark world. Here, she ends up absorbing Aether, an infinite stone (except it’s in fluid form) just like the Tesseract. At the same time, Dr Selvig (Stellan Skarsgård) is going mad convincing the world that the “convergence” – the alignment of all the nine realms – is nigh. That’s where the antagonists come in: pre-Asgardians, the Dark Elves, who want to use the Aether to turn the world dark so their kind can survive and the rest can perish. And that just makes for the setting. 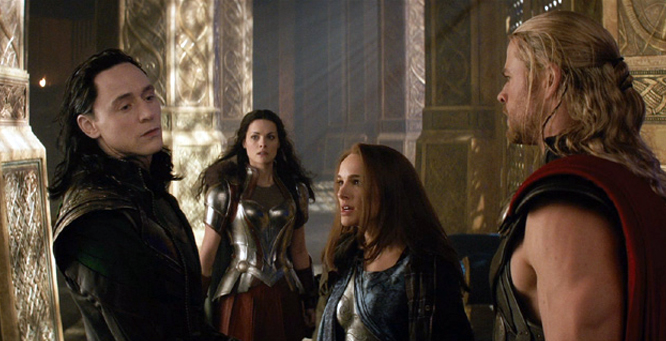 Like its predecessor, the film is more of a visual treat than the other superhero movies in the Marvel cinematic universe, mostly because of its exotic settings: Asgard and other realms. The story has more punch than the first Thor movie: the action is fast-paced and the plot is intricate enough to keep you hooked. The nerd in you will like it, the non-nerd in you will see a Hollywood action adventure. And for all the Marvel enthusiasts in the audience, there is a post-credits taster for the upcoming Guardians of the Galaxy.

Now coming to the Bechdel test: The movie has quite a few women in significant roles, and a few scenes in which the women are talking to each other. There are lines exchanged between women that are not about men. There’s a scene in which Darcy (Kat Dennings) and Jane are about to confront strangers near the wormhole when Darcy ends up screaming, “It’s okay, we’re Americans!” and Jane taunts her with, “Is that supposed to make them like us?” At a later stage, when an infected-with-Aether Jane is taken to Asgard for medical help (because nothing on Earth would be able to help her), there’s an exchange between Jane (who is a scientist on Earth) and an Asgardian medical professional where they discuss the differences between the Asgardian terminology for the technology being used to scan her and Earth’s theoretical physics terminology for the same.

(PS: We decided to go with the fake poster in the featured image because this happened.)

As a Rape Survivor I Absolutely Love the Superhero Jessica Jones TV Show. Who’d Have Guessed?