HomeCultureMen are Always Angry and Women Always Happy. What ...
October 23, 2017

Researchers from IIT, IBM and DU have just released the results of their really comprehensive study on gender stereotyping in Bollywood movies. It looked at 880 movie trailers and the scripts of 13 movies released between 2008 and 2017, and interestingly, the Wikipedia entries of 4000 Hindi movies released between 1970-2017, analysing their plots, movie titles, soundtrack and cast information and images.

One part of the paper looks at the adjectives most commonly used to describe men and women. Men were commonly described as wealthy, strong, successful, simple, strict, famous, drunk, corrupt and respected. Women characters on the other hand, were most widely described as pretty, rich, poor, sexy, pregnant, widowed, adopted, ailing, arrogant, conservative and insane (!).

It looked at how men and women were introduced into the plot: men with descriptions of their personality and profession (“honest policeman”), while women were described by their physical appearance and relationship to another character (“hero’s beautiful younger sister”).

Confirming what all the leading female playback singers told Anupama Chopra when they sat down to speak with her about discrimination in the industry on a controversial episode of Film Companion, this study shows the huge gender disparity in the number of male and female singer on Bollywood soundtracks. 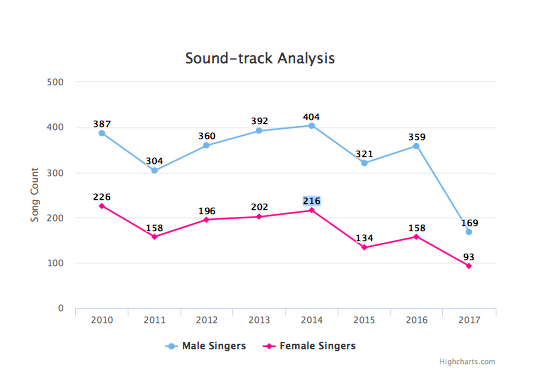 On that Film Companion episode, the singers talked about how there are no songs for female singers, and even the songs they do get to sing are often just so-called “duets”, where female singers have to sing about four high lines. This study warned about this factor too, and clarified that their findings only reveal whether a woman has appeared on the soundtrack or not: it doesn’t measure how much time or how many lines she sang on the track. So these numbers actually paint an optimistic picture of what the disparity really looks like.

They also analysed how much men and women get to speak in different movies, and the findings reveal some funny things. Everyone who hated Pink for handing the national baton of women’s rights to Amitabh Bachchan (and also for all the publicity stunts arranged around it, like Amitabh Bachchan’s conveniently timed letter to his granddaughters about skirts) will feel vindicated by the findings: the lead cast dialogue analysis of the film shows that 3/4th of the dialogue was spoken by a man. And Apurva Asrani’s Aligarh seems to have no dialogues by women at all! 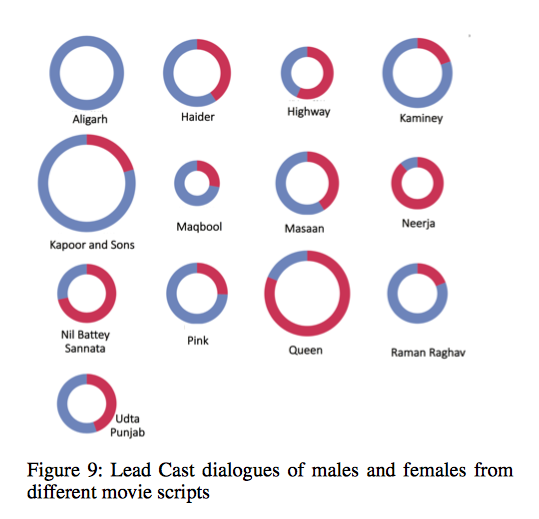 The report uncovers a whole bunch of other fascinating findings, including a “knowledge graph” for male and female characters, the centrality of men and women to the plot, the distribution of emotions (women are always happy, men are always angry) and a lot more. You can see the full study here.

One Response to “Men are Always Angry and Women Always Happy. What We Learnt From a New Study on Sexism in Bollywood Movies”