Indian gymnast and general star Dipa Karmakar has won a gold medal and came fourth in the balance beam event at the Gymnastics World Cup on Sunday. Dipa missed the bronze medal in the Rio Olympics and was out of action for about two years due to a leg injury. This win has come in at the right time for her, as she has to prove her mettle in the upcoming Asian games.

This is Dipa Karmakar doing the Produnova. The skill is named after the 1990s Russian champion Elena Produnova who has – and this is unique – four different skills named after her. Only five gymnasts have ever executed this vault.

And one of the five gymnasts, as we all know now is the awesome Dipa Karmakar, the first Indian gymnast of any gender to qualify for the Olympics. The description of the Produnova which Karmakar did back in 2014 is simple sounding – handspring double front salto. But it is so damn dangerous that few people attempt and plenty folks in the gymnastics community want it banned altogether.

So now let’s do a slowed-down version of the ‘vault of death’ and try to understand what in the high-flying-heavens Super Karmakar is doing here.

Karmakar runs towards the gymnastics equipment known as the vault. On the vault she does such a powerful handspring that it can  propel her into not one but two front somersaults.

Watch that handspring and the terrifying somersaults again. A second off and you can land with your entire bodyweight on your neck (at worst) or your legs (at best). Fadwa Mahmound the amazing Egyptian gymnast who is one of the five who has conquered the Produnova nearly did kill herself in her first competitive attempt. Her landing made us scream a little.

Or you could land on your feet, beam like a star and make it seem like the human body can fly.

Have you got a little gymnastics fever by osmosis? Here are three things you can do to feed the fever, starve the cold.

1. You could read Off-Balance, one of the most celebrated and candid gymnastics memoirs, written by Dominique Moceanu who was part of a winning US Olympics team at age 14 and learnt plenty about the dark underbelly of the sport. 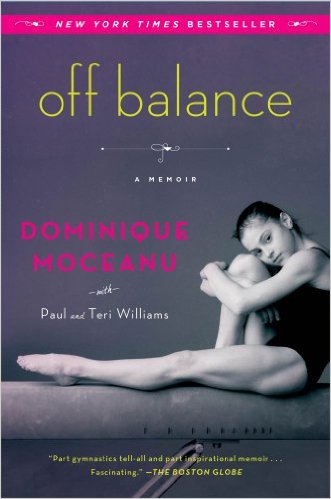 2. You could obsess over gymnastics gifs like we’ve been doing. It’s a world in itself. This one is a Nadia Comaneci gif, in case you were wondering.

3. You could discover the joy that is Sophina DeJesus who introduced the whip and the nae-nae and other glorious hip-hop moves to gymnastics, joining the relatively new conversations about race and intersectionality in the culture of this sport. This video has been watched over 13 million times for good reason.

How’s that fever doing? Ready to learn how to do a handstand?

What On Earth Are These Hordes of Women Up To?