Public Service Announcement: 2016 has early birthday presents for fans of Margaret Atwood. She will be speaking at the Jaipur LitFest (21-25 January) and on 27 January at the India Habitat Centre, New Delhi. So if you are in those cities, you lucky people, you. 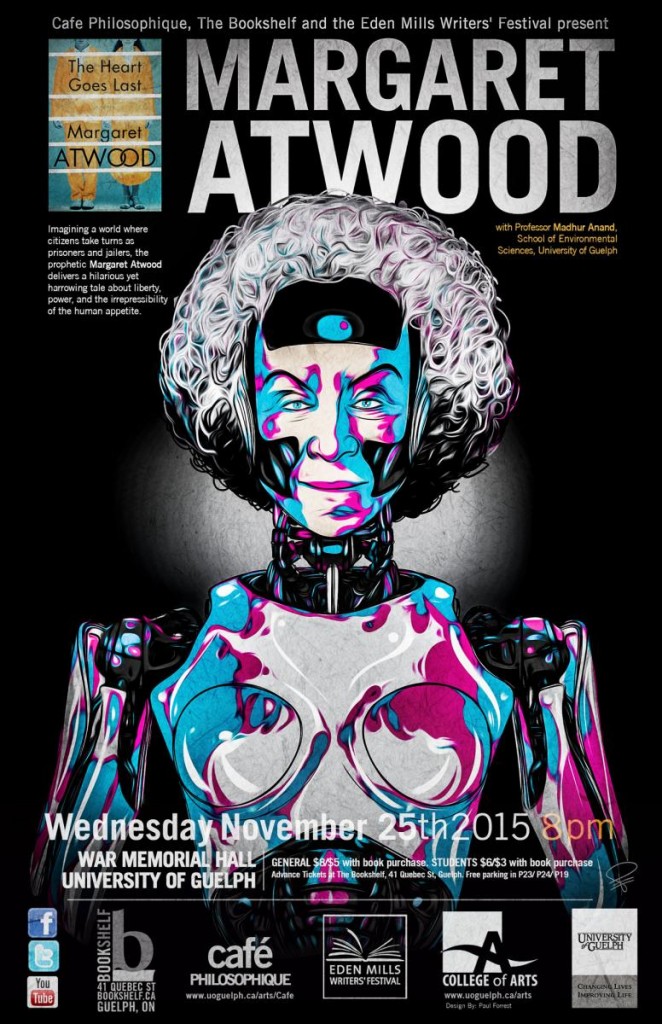 Margaret Atwood wrote my childhood before it happened. Or at least a very good approximation of it. Cat’s Eye, the only novel of hers that I remember reading, was published in 1988, when I was three – around the time it all started. When I first read the book at 20, I realized that someone whom I’d never met knew what my life as a child was – the secret one, with the memories I’d blocked out myself. It was nothing like reading a novel – or even non-fiction. It was like coming across a forgotten manuscript in the attic of your house and finding that your life was inexplicably, eerily written down before it happened. 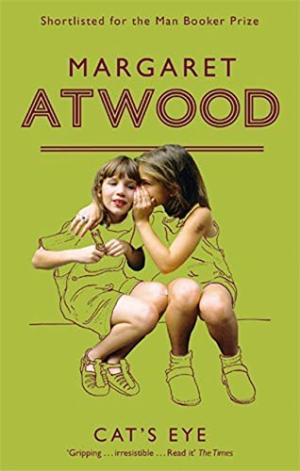 A friend of mine once told me, “But everyone who reads Cat’s Eye finds their life written in it.” That may be true; I wouldn’t know. But I know that for me, events as they later unfolded have been spelled out in ominous detail. This is why I think Atwood must be a witch – the fierce, omniscient kind of witch that I want to be when I grow up. There’s no other explanation I can think of for this dash of uncanny in my humdrum life.

Cat’s Eye is told by Elaine Risley, an artist who visits her childhood city of Toronto, for an exhibition of her work. This brings back a flood of memories for her – or rather, flashbacks. And many of those are of how she was bullied for a few years by three girls who went to her school: Carol, Grace and Cordelia. Especially Cordelia. Elaine recalls in great detail what happened to her in those pre-pubescent years. And, almost to the last detail, those things happened to me. I can’t tell you the actual details because I’d end up quoting half the book and comparing it to my life – which would be a boring exercise anyway. But this is how Atwood captured both the spirit and the details of my story.

The world hears about boys bullying other boys; and about ‘mean girls’ in American high schools oppressing all the other girls in their class. But before high school, before adolescence, in smaller, tighter circles of girls, there’s another kind of intense bullying going on that I once thought only happened to me. And it made me afraid to have children. For the longest time I thought there was no greater helplessness than to have a child who was being bullied, or who was bully-able. I told myself I wouldn’t put myself or my child in that position, and I would achieve this by not having children. And Elaine confirmed my fears by saying:

Most mothers worry when their daughters reach adolescence, but I was the opposite. I relaxed, I sighed with relief. Little girls are cute and small only to adults. To one another they are not cute. They are life-sized.

But we continue to make this mistake, to underestimate children, especially girls. They look just like dolls, after all. How could anyone guess the vicious power plays going on behind those smooth baby-faces? Once, in the middle of a bullying scene, Elaine and her friends are interrupted:

My father walks into the room, wearing his white lab coat. He’s working in another part of the building, but he’s come to check on us. “Enjoying the parade, girls?” he says. “Oh yes, thank you,” Carol says, and giggles. Grace says, “Yes, thank you.” I say nothing. Cordelia gets down off her windowsill and slides up onto mine, sitting close beside me. “We’re enjoying it extremely, thank you very much,” she says in her voice for adults. My parents think she has beautiful manners. She puts an arm around me, gives me a little squeeze, a squeeze of complicity, of instruction. Everything will be all right as long as I sit still, say nothing, reveal nothing. I will be saved then, I will be acceptable once more. I smile, tremulous with relief, with gratitude. But as soon as my father is out of the room Cordelia turns to face me. Her expression is sad rather than angry. She shakes her head. “How could you?” she says. “How could you be so impolite? You didn’t even answer him. You know what this means, don’t you? I’m afraid you’ll have to be punished. What do you have to say for yourself?”

OK kids, you're getting ahead of me! Warm thank-you to all T-pal Birthday Greeters! pic.twitter.com/bBoQIc2VjU

My friends knew how to talk to adults so that they wouldn’t suspect anything. Sometimes the pressure of my emotions would be too great and I would cry and tell my mother, who would round up my friends and make them apologize – and this sometimes made things worse. Elaine, however, had a huge sense of honour. She wouldn’t tell the adults, ever. I learned to put survival before pride, ‘weakness’ before face-saving.

Elaine learned a survival tactic too; one that didn’t involve loss of face. When the situation became too tough for her, she would escape in a way that her friends couldn’t find fault with.

The next time Cordelia tells me to stand against the wall I faint again. Now I can do it almost whenever I want to. I hold my breath and hear the rustling noise and see the blackness and then I slip sideways, out of my body, and I’m somewhere else.

For me, this was crying. I’d cry and run away. Crying slid me into another mental state; one in which I didn’t feel so trapped that I was paralyzed, and my legs would actually move. Cry and run, cry and run, that’s my go-to for whenever I feel trapped – even today.

Just as Elaine says, this ends with adolescence. It did for me too, in exactly the way that Elaine describes:

“You’re being insolent,” says Cordelia. “Wipe that smirk off your face.” I am still a coward, still fearful; none of that has changed. But I turn and walk away from her. It’s like stepping off a cliff, believing the air will hold you up. And it does. I see that I don’t have to do what she says, and, worse and better, I’ve never had to do what she says. I can do what I like. “Don’t you dare walk away on us,” Cordelia says behind me. “You get back here right now!” I can hear this for what it is. It’s an imitation, it’s acting. It’s an impersonation, of someone much older. It’s a game. There was never anything about me that needed to be improved. It was always a game, and I have been fooled. I have been stupid. My anger is as much at myself as at them. “Ten stacks of plates,” says Grace. This would once have reduced me. Now I find it silly. I keep walking. I feel daring, light-headed. They are not my best friends or even my friends. Nothing binds me to them. I am free.

Adolescence, and a new school, freed me too. But I tell a lie. Atwood knows that I’m not free, as middle-aged Elaine isn’t either. Elaine is filled with fantasies of Cordelia in distress – until she chances upon the fantasy of Cordelia lying in an iron lung – a person-sized cylindrical chamber that acts as a kind of ventilator for, say, polio patients. This fantasy satisfies Elaine. But maybe it satisfies her too much. Maybe Elaine herself is in an iron lung, unable to breathe freely until she resolves her childhood issues. I’d forgotten about the iron lung until I re-read the book recently, ten years after my first reading. And uncanny happened the second time around too. Today, agoraphobic, introverted, cry-and-run, pity-party me is living as much of an iron-lung life as possible. So I may be freed, but I’m not free.

The actual events in Cat’s Eye may be similar to what happened to me. But what they mean to Elaine – or Atwood herself – isn’t the same at all. For me, a history of being bullied as a kid is a one-track, one-trick tunnel of deterministic self-pity and learned helplessness. When I write about it or talk about it, I can’t complicate it; make it palatable or beautiful. Atwood does all of the above through Elaine’s voice. As Elaine says:

But Cordelia doesn’t do these things or have this power over me because she’s my enemy. Far from it. I know about enemies. There are enemies in the schoolyard, they yell things at one another and if they’re boys they fight. In the war there were enemies. […] You throw snowballs at enemies and rejoice if they get hit. With enemies you can feel hatred, and anger. But Cordelia is my friend. She likes me, she wants to help me, they all do. They are my friends, my girl friends, my best friends. I have never had any before and I’m terrified of losing them. I want to please.

Today, I avoid two of ‘my’ three girls as much as I can. The third is special, and she’s still my friend. But back then, she was my bully and my friend – which is difficult to hold in one’s head, the way Atwood does with ease. Most mind-boggling of all, the parts of Cat’s Eye that deal with this period in which Elaine was bullied are about friendship – not about bullying. I wish I could say I can’t identify with that, but I do. And Cat’s Eye on the whole is not a novel about bullying. It’s a story about Elaine growing older and making peace with herself.

Atwood’s frightening clairvoyance makes good use of time. The first line of the book reads: “Time is not a line but a dimension, but a line, like the dimensions of space.” Cat’s Eye has plenty of time travel in it – Elaine is always going back and forth – but it’s more than that. The vehicle, the time machine, is the book itself. It transported me at 20 to my life at ten; today at 30, it takes me back to when I was 20. I see myself reflected in the pages all over again. What will I see when I re-read the book another ten years from now, when I’m 40?

Whatever the answer is, it won’t be ‘nothing’. If you’re looking for six impossible things before breakfast, turn to Atwood.