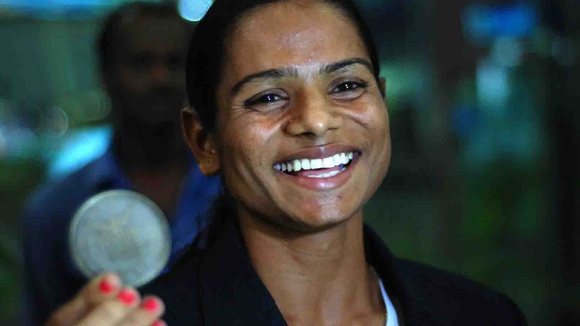 At the Federation Cup National Athletics Championships in Delhi yesterday (April 28), Dutee Chand broke a 16-year national record for the 100m, leading the race all the way to an amazing 11.33 second finish!

She broke Rachita Mistry’s record of 11.38 seconds, set in 2000 at National Circuit Athletic Meet in Thiruvananathapuram. Merlin K Joseph beat this record at the National Open Athletics Championships in 2013 by 0.03 seconds, but it was never ratified by the Athletics Federation of India (AFI). Dutee, who also participated in the 100m race that day in 2013, was 17 at the time, and all eyes were on her for being the next big thing in athletics. That was, of course, in the days before gender prejudice got in the way of Dutee’s career in 2014, setting her back tremendously (Read more on that here.). Dutee, to her credit, never stopped fighting, and has her sights set on the 2016 Olympics.

Which brings us to more great news. While Dutee outdid her personal best of 11.62 seconds, she was also very, very close to qualifying for the Rio Olympics, missing by one-hundredth of a second. She still has three months left to qualify for the Olympics – if she does, she’ll be the first Indian woman to qualify for the 100m at the Olympics since Qualifying Standards were introduced two decades ago, The Indian Express reports.

“I came into this meet with the confidence that I could beat the national record and qualify for the Olympics,” Chand told Express. “I am disappointed that I missed out on bagging a Rio berth but the fact that I was so close only means that I am progressing in the right direction. It is during moments like these that I feel that whatever battles I have had to fight have been worth it.”

It’s been an exciting ride for Dutee so far, who bounced back to athletics with renewed energy last year. We’re watching from the edges of our seats!

If Done Right, the Kerala Government’s Sports Meet for Transpeople Could Be a Step in the Right Direction

Shout it From the Rooftops: Dutee Chand is Going to the Rio Olympics

This Year Has Been an Amazing Rollercoaster of Women’s Sports Achievements. Catch Up!