Update, Jan 6, 2016: Dutee Chand, a 19-year-old sprinter from Odisha, was cleared to compete in sporting events by the Sports Authority of India (SAI) last July, a year after it was claimed she had failed a gender test. That was a triumph in itself. But last month she was awarded the Ekalabya Puraskar for sports, instituted by Odisha in 1993. This will never ever make up for the test and the ban – SAI will always carry the blame for that. But we hope against hope that this will encourage other sportswomen not to drop out when they’re at the receiving end of similar treatment. And of course, break out the chocolate/champagne/chikku milkshake! There are very few occasions when one can celebrate unconditionally, and this is one of them. Read on if you want to hear about Chand’s other celebratory moment last year, and the debate around gender testing in sports.

Jul 29, 2015: Dutee Chand can run again. A year on from “failing” what the Sports Authority of India (SAI) was careful not to call a “gender test” (even though SAI said she could not compete as a female), yesterday, a court in Lausanne ruled that she could compete in national and international events for now.

A little over a year since Chand was found to have “hyperandrogenism” ahead of the International Association of Athletics Federations (IAAF) World Junior Championship in America, the Switzerland-based Court for Arbitration of Sport (CAS) on Monday ruled that the IAAF immediately suspend “hyperandrogenism regulation”.

The CAS gave the IAAF a maximum of two years to provide scientific evidence that enhanced testosterone levels, exhibited by hyperandrogenic athletes, had a quantitative effect on performance. It said it was “unable to conclude that hyperandrogenic female athletes may benefit from such a significant performance advantage that it is necessary to exclude them from competing in the female category,” and suspended the IAAF’s regulations regarding women with hyperandrogenism. And while these regulations are suspended, Chand can compete at the national and international levels. Chand’s battle isn’t over, but it means at least two crucial years more after being forced out of a very, very promising career for the last year.

The news yesterday reminded me of this excellent piece from last year by Rudraneil Sengupta and Dhamini Ratnam about Chand’s case, and how it was at the very centre of a global debate on sports. They reported that Chand had been given the option of undergoing surgery and taking long-term hormone replacement therapy to lower androgen levels if she wanted to compete again, but she refused to do anything to change herself. Chand told them, “When I read that my condition is treatable, I thought they meant that I could take a medicine, like you take a painkiller. But when I was told that it would involve changing my body in some way, I didn’t want to.” Her stand had brought together an international group of scientists, former athletes and bioethicists, and a litigator who fought her case pro bono.

The question at the heart of the controversy over hyperandrogenism – a naturally-occurring condition – is whether increased levels of testosterone afford athletes an advantage. Sengupta and Ratnam cited a paper co-authored by Martin Ritzen, emeritus professor at the Karolinska Institute, Sweden, and a former member of the IOC Medical Commission, who helped shape the hyperandrogenism rule. The paper said “there is no clear scientific evidence proving that a high level of [testosterone] is a significant determinant of performance in female sports…”

And here’s more from Sengupta and Ratnam’s brilliant story:

The principal logic behind the hyperandrogenism policy is that men and women produce distinctly different levels of testosterone, and these levels are responsible for the vast difference in their performance. But a large-scale, 2009 study on elite athletes conducted by GH-2000, a project co-funded by the IOC and the European Union through the Growth Hormone Research Society, found a significant overlap in testosterone values in men and women. Around 5% of the women tested in the “male range”, and 8% had levels above the “female range”. Even more tellingly, 25% of the men, including some Olympic medallists, were below the “male range”, with a large number testing in the “female range”.

The difference in male and female athletic performance, especially in explosive events like sprints, is truly large. The winner of the 2012 Olympic Women’s 100m sprint would not even qualify for the men’s event. But these differences are not explained by testosterone alone.

“There is no stigma for men who are strong and fast,” says Karkazis. “There are no tests for men to weed out those who produce more testosterone than other men. Why not?”

The hyperandrogenism rule is unique in the sporting world for being the only policy that prohibits a natural phenomenon.

But there’s a larger issue at play here when talking about female athletes, and it has much more to do with the way we see them than it has to do with the question of hormones and biology. We’re prone to shaming women for not being feminine enough, and we police them for it. And in the bargain, we violate their privacy and dignity, holding them endlessly in our gaze. At one end, there are the terrible comments made repeatedly about the bodies of sportspersons like the Williams sisters – considering Serena Williams’s nearly two-decade career, you’d think that stuff would be old by now, but it isn’t. At the other end, there’s Caster Semenya, who, like Chand, was famously submitted to “gender testing” after an anonymous complaint, without being informed about what she was being tested for. The ‘revelations’ about Semenya came immediately after her win at the IAAF World Championships, and she received shocking treatment at the hands of the international media – what her genitalia looked like, whether or not she had a womb and ovaries, and whether she was really a man were examined in malicious detail. The delight over bringing down a successful woman – a world champion 800m runner, no less – was palpable. She won because she was a man! It’s a heartbreaking contradiction in women’s sport, where women are seen as a lesser class of athletes than men (if you want a recent example, think of all the moaning about women’s football during the 2015 FIFA Women’s World Cup). But if they perform well but don’t look girly enough while they’re at it, then they can’t really be women, can they? In a well-meaning but heartbreaking attempt to “prove” Semenya’s femininity, a magazine photoshoot had been engineered with Semenya in a dress and makeup. 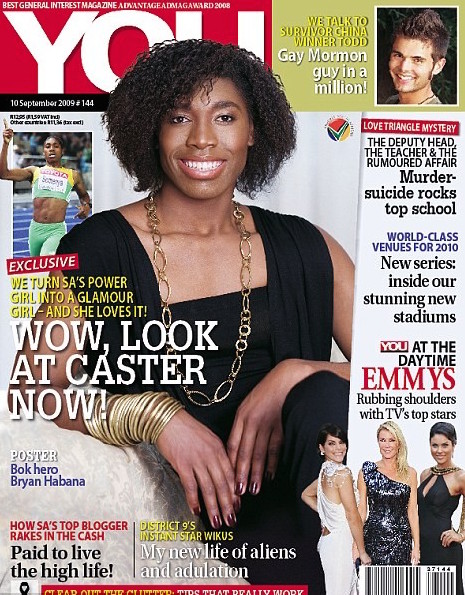 After the widespread outrage and dismay that followed Semenya’s case, the term “gender testing” became something of a taboo. In Chand’s case, SAI was very careful about reiterating that she was being tested for androgen levels, not for gender verification, which was banned (and SAI pretended to follow privacy protocols about revealing Chand’s identity, but her identity had clearly already been made known to the press). Semenya was cleared in 2010. But the practice itself has found ways of resurfacing – as Sengupta and Ratnam point out, testing for “hyperandrogenism” is one of them.

Santhi Soundarajan, a 34-year-old athlete from Tamil Nadu, expressed support for Chand when the controversy emerged last year. Unfortunately, she’s had to face the same scrutiny as Chand: in 2006, she was humiliatingly stripped of the silver medal she won at the Asian Games for failing a “gender test”. In 2007, she attempted suicide. The Pudukottai girl from a Dalit family survived, and then to avoid more questions about her gender, cut her hair short, wore men’s clothes, and worked as a labourer at a brick-kiln. SAI eventually employed her again, but the damage is done. Her employment is on a temporary basis, and the government has not provided her with the Rs 10 lakh she was promised for her win, as her silver medal was never restored to her.

In his detailed examination of the Soundarajan case against the backdrop of attempts to scientifically determine sex, Rakesh Kalshian quotes from Sexing the Body: Gender Politics and the Construction of Sexuality by Anne Fausto-Sterling, professor of biology and gender studies at Brown University. In it, she says, “The more we look for a simple physical basis for ‘sex,’ the more it becomes clear that ‘sex’ is not a pure physical category. What bodily signals and functions we define as male or female come already entangled in our ideas about gender.” Kalshian writes:

If ever there was a lesson in Santhi’s tragic story, it was either wilfully ignored or conveniently forgotten. The scandalous treatment meted out to Semenya and Pramanik underscore this discomfiting fact. It seems it may take us many generations before we can shed our deeply entrenched prejudices about sex and gender, and concede that sex is not merely a matter of genes, or chromosomes, or hormones, or family or society or chance, solo or in concert…

And let’s not forget Pinki Pramanik, whose former lover accused her of being a man and charged her with rape in 2012. While the rape allegations deserved looking into, it was the allegations that she was actually a man that grabbed more attention. “She’s-a-he & rape slur on sprinter” went this gleeful headline in The Telegraph. Pramanik was photographed being hauled away by the police, and she was filmed naked after being taken to a private nursing home for a “gender test”. The 29-second clip went viral. Then she was declared to have been a man, according to test results. She was eventually cleared, but as in the case of Soundarajan, the damage to her career seems complete. Last month, she alleged that the Railways, where she is employed, wasn’t giving her leave to train. Her employers told The Indian Express that this is because Pramanik, who is now 29, is past her prime.

There’s another victim of prejudice about sex and gender in sports, but on the other side of the same coin: Fallon Fox, the American transgender Mixed Martial Arts fighter who has “more than fulfilled” the standard requirements for trans athletes by having had surgery and taking hormones for at least two years afterwards, but is still accused (even by high-profile fighters like MMA champ Ronda Rousey) of having an unfair advantage over her opponents for having been assigned male at birth, despite being cleared by medical experts to compete in the female category.

What makes a woman a “real” woman, and is there such a thing? We’re watching Chand’s case with interest. Because it may prove several more steps towards tearing this question down.