Every weekday in the Connected Hum Tum Blog we will be posting and talking about the latest goings-on of the six women cantering around Mumbai recording their lives with video cameras. (Read The Curtain-Raiser post for a quick intro to the show.)

Last night’s episode was framed around being alone. Preeti is alone in being extremely resourceful, Mahima is more literally alone and Pallavi is the bride left to fend for herself (who might or might not be walking into a setup).

Throughout the episode, I couldn’t help feeling this warm sense of anything-is-more-possible when a girl’s got her camera handy. I don’t know if a well-fed camera ranks above or below pepper spray in a list of life-aids to carry around. You know, the way Snoopy has his hut and Calvin has Hobbes.

In an amazingly pathos-inducing scene, Mahima comes back to her PG drenched in rain. Like a triumphant warrior, she tells us how she saved her camera by hiding it in her jacket.

I find myself drifting in and out of immediate investment in these women’s lives. Like all viewers, I imagine some premises work better for me. Preeti’s wry humour certainly carried me through the episode. Not to mention, Mahima emasculating that 20-year-old casting director.

But I’m completely invested in all the different kinds of camerawork and video-aesthetics on offer.

Mahima, our very own tech-flaneur, captures not just the city, but its reactions to her. We see men glaring at her as she talks the camera with almost no self-consciousness. She is already such a good actor.

Preeti’s camerawork manages to expose her husband as gravity-defyingly stationary. That man is a rock. It is as if she carefully persuades viewers of her husband’s toxic immovability.  Of course, it occurred to me later that it might not be the way she shoots him, he might be, er, just like that all the time.

Pallavi, of the women so far, shows the most selfie tendencies. This includes shooting herself with make-up on and being slightly absent from the frame because she is running the frame over in her head. But, a selfie revolution is hardly a bad thing. 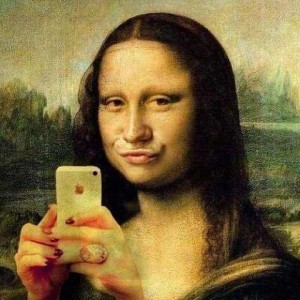 I’ve never been more convinced cutting out the middle-camera-man, and shooting yourself is the tool of some revolution. Connected Hum Tum is a show staggeringly, and pleasantly, devoid of real-time melodrama (sometimes even drama). The drama, loneliness, divorce, etc. are referenced but only during the daily dissections. Not just is Hum Tum anti-melodrama, it seems clearly anti-soap.

It creates a different kind of on-screen time. In an attempt to acquaint myself with TV, I watched Zee TV for a couple of hours before Hum Tum’s 10pm slot. In the soaps I watched, every minute of the female protagonist’s time was spent fire-fighting some situation or the other.

The pop-culture enthu part of me wants to write about soaps with pure love. And I’ll work on that. But for now, I know I would be delusional if I didn’t mention that soap operas are the enemies of female vocational undertakings.  Soap opera time is not just unfair to any woman with a job, but to women who don’t have a large house with ominously purple cushions to swan around on.

Reassuringly, the women in Hum Tum don’t have too much time for us. They just check in, morning and evening, because they are kinetically living their lives.

For me the central tension of Hum Tum is:  how do you fight for the time not to have time? How do you get your time back? With a hut of your own, an imaginary tiger or your camera.

OMG, to borrow a friend’s phrase, Mahima is Adorebala! Second favourite phrase for this episode: Mahima saying to the camera: “Auto mein baalon ki mummy-papa ho jaati hai.” Favourite phrase that I can’t stop saying: Mahima to wanna-be macho casting director when she discovers he is only 20: “Inno-sant!”

Say it with me: Inno-sant!

I love Mahima best, although some part of me feels like I should love Preeti. Every time I see Mahima on screen, I want to give her my job and pay her electricity bill and maybe invite her to live with me, but most importantly, to take her away from Bombay. I think it’s because it’s more painful than I expected, watching what I’m almost certain is a completely futile struggle, especially since she seems as “innocent” as the twenty year old director she encountered in last night’s episode. I find myself wishing, only for her sake, that she wasn’t on the show.

I also find myself wishing, for my own sake, that Pallavi wasn’t either. Thus far, she seems quite purposeless, not because her situation is uninteresting, but because the way she chooses to film it is.

The show might have decided that anchor Abhay Deol needs to bat from the “boys’ side”, but why does that mean saying such bland lines? “Aurto ko shadi mein bahut interest hai (snigger), but dulhe mein bilkul nahin.” And, er, dude, I don’t know about you but phone ka aur gas ka connection is important to me too, not just the ladies.

Sanju eats ice cream in cold milk? His “thanda-thanda cool-cool” whine is just…just… He says he wants it. He says it’s so easy to make. He says she needs excercise since she’s doesn’t do anything the whole day except taking care of her kid. He says he’s forced to bug her like this. He says she should also eat some. A-may-jing.