Yesterday, while I was at work, minding my own business and doing some mid-week chilling, I checked my phone to find that a former senior from pre-university college that I hadn’t spoken to in years had sent me a message on Facebook: 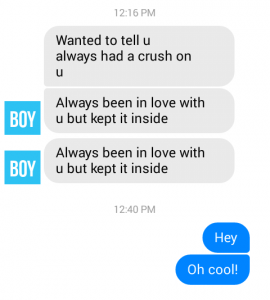 What else was I supposed to say? This happens so often online that I feel like a pro at responding to these messages (or maybe soon, as you’ll see, we will all beg to differ. Haha). But there was more to come. 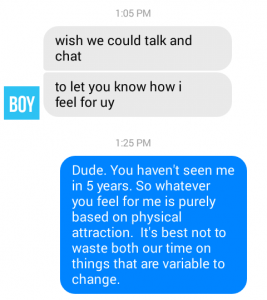 I wasn’t interested, and thought I’d try and cut him off as casually as I could, and get on with my day. But he wasn’t giving up any time soon. 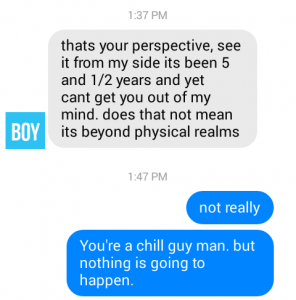 Notice how he corrects me and says five-and-a-half years? He’s right, and he’s clearly been keeping tabs on this much better than I have. But ‘no’ is clearly an answer he doesn’t like to hear: 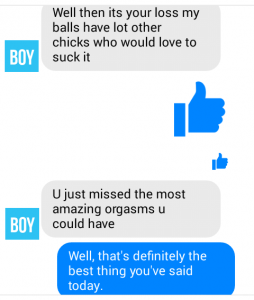 NOOOOO. So many regrets! The train of opportunity chugged by and I missed it. Now where do I go to get the best orgasms? He obviously hasn’t heard of my right hand. 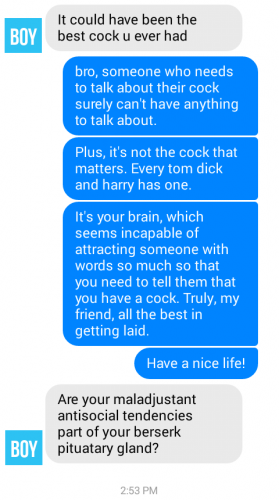 Okay, gross. This was unwarranted. I didn’t care about his balls or orgasms, but when he brought up his cock, I’d had it. (But you have to give it to him. He was so cool and composed, and responded with a Calvin & Hobbes quote.) I took him off my list of Facebook friends.

I took a screenshot of his conversation with me (without blurring out his name) and put it up on my Facebook wall. For one, it was funny. Moreover, I was like, hell, even people you know can do shit like this to you online? I wanted to show people that this could happen. And I just wanted him to stop with the messages and leave me alone. That’s when things got crazier: 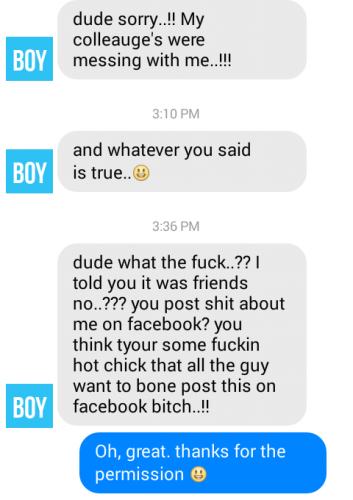 Riiiiight…. his colleagues. Who know *exactly* how long it had been since we had last met. OF COURSE it wasn’t him! How could I not get it? But my post started to get really popular. It was trending, and had close to 250 likes from my friends, and around 100 comments. But the dude wouldn’t go away. 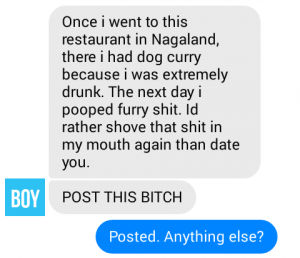 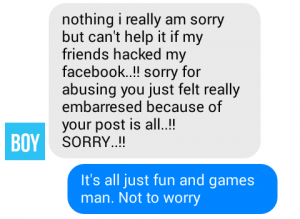 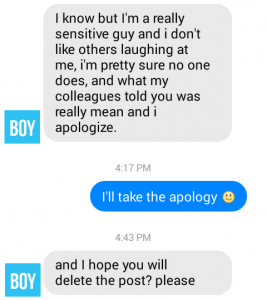 That’s when people start sending me messages asking me to take it down, ‘cause you know, poor dude, I’d been really mean by outing his abuse. One of my friends called me up to tell me that she knew him well, he was a really nice guy, and would never do such a thing. Apparently he was a “gentleman” and was “devastated” by what happened. It was his colleagues who had done it and I was ruining his “reputation”. Even if the dubious claim about his colleagues sending me those initial messages is true, his abuse once he found out I’d made the conversation public is inexcusable. But none of his defenders seem very bothered by that. Some of my friends began to comment on my post (set to private, mind you), telling me I was wrong to make his name public. One of my friends texted me to say, “You ruined him.”

Thankfully, most of my friends and family support me completely, and a few friends even asked if I wanted legal support. I’m very grateful and truly touched. I NEED MORE PEOPLE LIKE YOU GAIS.

But to me, it really was all fun and games, just like his ‘colleagues’ probably thought it would be. Everyone had a good laugh and that was it. Except he wasn’t so thrilled when it was at his expense.

I decided that I’d accept his apology, but I wouldn’t take the post down. I don’t object to being hit on, but I do draw the line at abuse. A female friend of mine sent me a screenshot of a declaration of love from the same guy this week, which she never responded to.

I get messages like this on Facebook all the time (my ‘Other’ inbox is filled with more unsolicited messages from strangers than I can count, and if you girls open yours, you’ll see them too), though none have been so creative or so angry in their response. Furry poop? I’ll remember that for a long time.

This morning, a Facebook chat group was created, where a couple of my friends sent me sincere appeals saying that he was good person and hadn’t sent me those messages, and they repeatedly urged me to take my post down. Soon after, my post was gone.

But it wasn’t me who took it down.

Facebook did. Someone must have reported it. The irony is that you can see his abuse in the screenshot here. So yay, Facebook. I posted about a dude who sent me abuse, and you took down my post, instead of policing his abuse. Congratulations on the great community standards, guys. 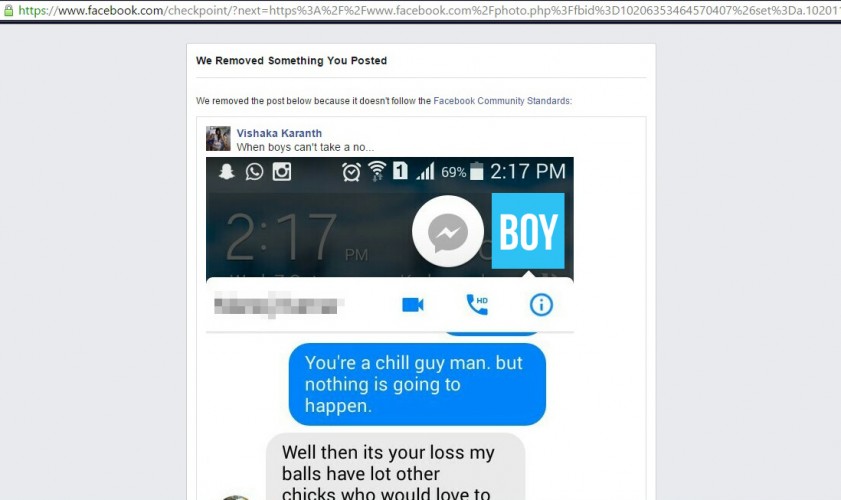 21 Responses to “Facebook, Furry Poop and Dudes Who Can’t Take No For an Answer”