Back on the 28th of November, a tweet by Iranian-American scholar Alex Shams went viral.

Turkish is a gender neutral language. There is no “he” or “she” – everything is just “o”. But look what happens when Google translates to English. Thread: pic.twitter.com/mIWjP4E6xw

He explained in the comments that Turkish is a gender neutral language, but when you enter Turkish sentences into Google Translate, the sentences get automatically gendered. And of course, in the most stereotypical manner possible. As his tweet shows, gender-neutral sentences get translated into sexist assumptions, like the idea that engineers are male, and nurses are female, and “she” naturally loves “him”. 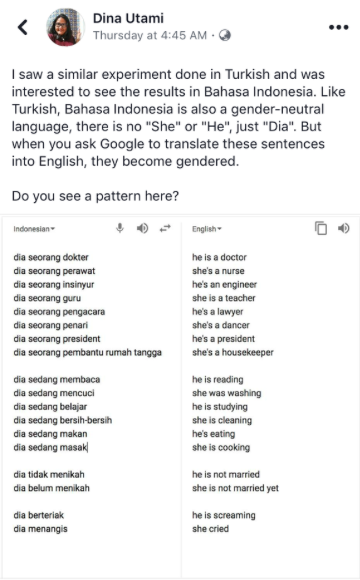 Shams explains in his thread that this happens because Google Translate picks up on how these words are commonly used online. So if the majority of references in its database to “engineers” are male, it categorises the word as male. He explains the danger of this phenomenon quite comprehensively. “Google Translate magnifies biases that exist in our culture – like unequal access to employment for women in all fields, or culturally constructed notions that women are unhappy, lazy, hopeless romantics always looking for husbands – and transforms them into translations. It has been argued that technology overcomes the biases of human beings, and because it is neutral the increasing automation of the world offers a way out of inequality. But as this small example shows, technology is far from neutral. Technology, like anything else, is what you make of it – and the way we are using technology is currently reinforcing the inequalities and biases of the world around us.”