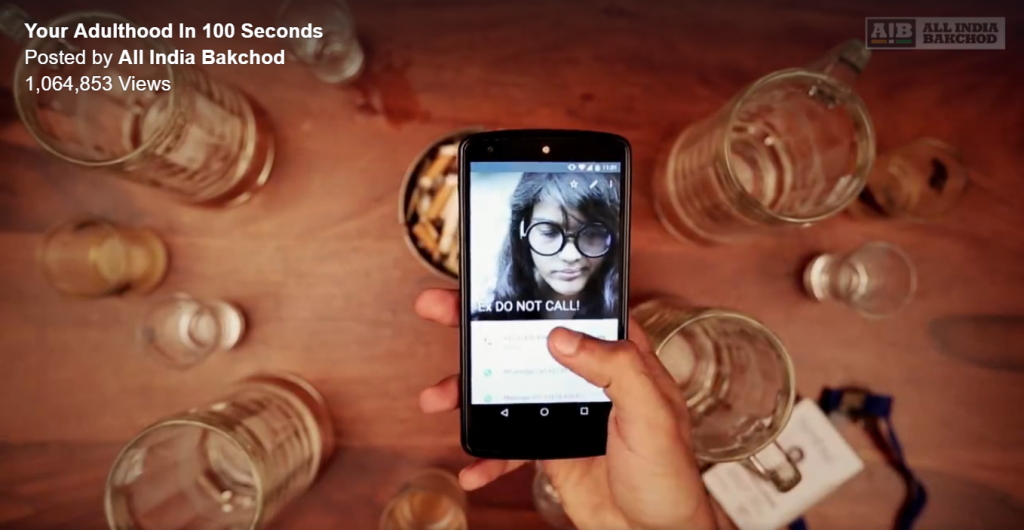 Last week, Buzzfeed India published a video called, ‘Your Childhood in 100 seconds’, bringing together some of the things that defined every [probably upper middle-class] Indian’s childhood. It hit 80s and 90s kids straight in the proverbial feels, and everyone was basking in the warm glow it produced until AIB jumped in and spoiled it last night with their response video, ‘Your Adulthood in 100 Seconds’.

Considering how pleasingly gender-neutral the Buzzfeed video was, and knowing that Tanmay Bhat recently broke the internet with his viral mansplaination of feminism, I wasn’t feeling extra apprehensive or anything when I started watching. At around 30 seconds though, I began to suspect something super important: AIB forgot that *you* might be a woman!

Since several people shared the video saying, “this is genius”, and, “this is everything”, and even the Quint promised that it was perfect and would make me say “me AF as an adult!” (???), I was confused to see entire snippets that were so unfamiliar that I had to play them back to understand what was going on. No matches on Tinder? Three tissues after a clit-twiddle? And is that literally male pattern baldness I’m supposed to relate to?

Now of course I smoke pot and my ex is indeed a girl, but I don’t remember Manboobs Gym ever being a huge part of my life. More importantly, where are all the creatively spelled offers of friendship, and fun times spent dodging creepy men, and workplace sexism? Could 100 seconds of my adulthood really go by without someone telling me that my bra-strap is showing, and if unprotected sex and i-Pills are such an essential part of adulthood, where is my Meftal Spas and the iconic Girl in the Club Bathroom? (Also why has your adulthood been defined by unprotected sex?) And by the way, bro AIB, you know that some super-significant things have to happen before adulthood can randomly throw dirty diapers around, right?

It’s tiring when men erase women and project their own limited experiences as the whole neutral world’s, but they could at least make an effort to be a little less typical yaar. This video’s almost shockingly predictable in its male centrism: according to AIB, all of us are one Siddharth Kumar, and the only women who make it into this narrative are The Mother, The Ex, The Sexual Partner, and The Wife.

My advice? Bromen, next time, remember that women exist, and not just as your mom. We’re people with lives and adulthoods that don’t only exist relative to male *you*. Your particular brand of yaar-bro humour is funny but exclusive, by which I mean it sometimes excludes half of us from the enjoyment of it because you treat us as supporting cast to your hairy Mr Kumar. I’m not calling your video sexist (here), I’m just saying either broaden your horizon to include the other half of the population, or title your videos properly and change your name to Boyzone so we know what we’re getting into.

And guys, before you start hammering at your keyboards, it’s okay: remember, Tanmay totally said I’m allowed to do this. That day in the car he reminded us that feminists who talk about sexism in movies (and stuff) are real feminists too, and while it may not seem like a real issue to you, erasure is a real issue to a lot of people ya.

You can watch AIB’s video here:

Phantom Films, All India Bakchod and #MeToo: The Rise and Fall of the ‘Edgelords’

Is There Such a Thing as Feminine Indian Humour? TLC’s New Show Finds Out

Twitter Trolls Tried to Fat-Shame AIB Writer and Comedian Supriya Joshi. She Had the Last Laugh

4 Responses to “Hello AIB, When You Made Your Adulthood Video, Did You Forget Something?”