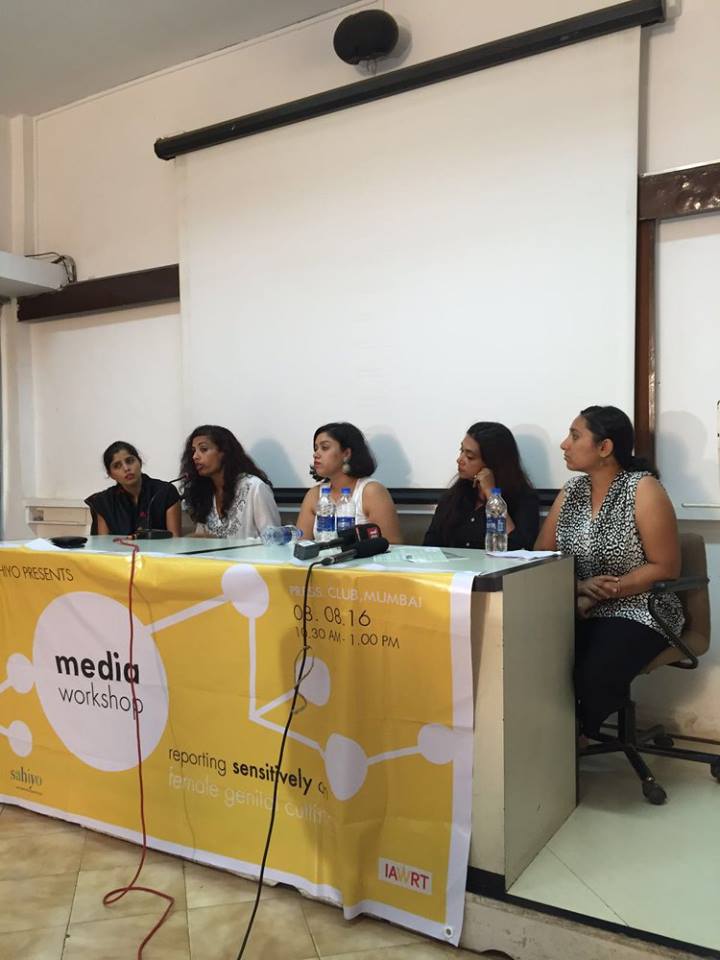 Sahiyo, a Mumbai-based organisation that has been campaigning fiercely to end female genital cutting (FGC), recently conducted a media workshop on how to sensitively report on female genital cutting. FGC in India is practiced by the Dawoodi Bohra community, where Type 1 or clitrodectomy (where the clitoral head is cut), is done. Traditionally it’s been seen as an essential pre-pubescent coming of age ritual. Sahiyo has been working hard to gather up the growing dissent, change the minds of those who still believe in it, and highlight the physical and mental trauma that accompanies clitrodectomy.

Sahiyo believes that a key factor to ensuring that FGC is stopped is for the media to act as agents of social change.

Here’s what we learned at the workshop about how to report FGC:

Don’t use the names of the survivors without their permission.

Do remember that the victim’s dignity, privacy, and security are always top priority. Since survivors might not be comfortable with various news outlets running their stories or interviews that they might have given, always get the permission of the survivors before republishing their articles.

Don’t use the term ‘mutilation,’ because it assumes that there is intent to harm. Since FGC is usually performed mother to daughter, assuming that mothers intend to harm their daughters rather than performing a cultural ritual can alienate the survivors and the community.

There are many different experiences, so stop generalising

Don’t use language that makes it sound like every experience is the same — for example, not all women experience physical or mental consequences. Generalising can spread wrong information and alienate other survivors.

Do use the language used by the survivors. If they say that FGM or khatna was performed, then use the same language to report it so that readers know that these experiences can’t be generalised.

How to know a good picture from a terrible one

Don’t use stock images of a child crying or screaming in pain, because the child who has experienced FGC will also look at these images. We also don’t want to perpetuate the stereotype that family members are perpetrators of a crime either; rather they are individuals performing a customary ritual.

Don’t use photos of FGC being practiced in Iran or Iraq when you’re talking about India. It leads to stereotyping and marginalisation.

Do use images that are representative of the community. We were shown as an example, the photograph of a woman in a traditional attire worn by women of the Dawoodi  Bohra community walking down the road with a child, so that their faces weren’t visible.

Do remember that there are different kinds of FGC practiced in different countries, like a large number of African countries, Gulf/Arab countries, Indonesia, etc. Get an expert to check your facts.

You don’t have to be pessimistic

Don’t always focus only on the negatives.

Do highlight how the opinions towards FGC are changing, or how more and more people from communities that otherwise practice FGC don’t engage in it (in an ongoing survey being conducted by Sahiyo, out of 385 people, only 10 percent were okay with the practice continuing).

Do include contact details of organisations that work with victims of FGC so that other survivors will also know who they can talk to, after getting the organisation’s permission.

Here’s hoping that this helps the current movement against FGC.

The SC Hears Arguments on Female Genital Cutting But What Do Dawoodi Bohra Women Really Want?