Ariel detergent’s #ShareTheLoad campaign, which encourages men to do the laundry too, started with this neat ad, very kraanthi.

An older woman proudly declares that her daughter-in-law earns more than her son, at which point said son pops his head in and asks his wife why his shirt hasn’t been washed. Ad agency BBDO did a wonderful job on this one, though the response from men hasn’t been quite so stain-free (more on that later).

But hold your horses. Now Surf Excel and Lloyd washing machines having missed the femvertising wagon, decided to get on the we-are-not-anti-nationals-asking-men-to-wash-clothes wagon. Surf Excel’s ad claims Surf Excel is “As good as Mom’s hand wash”. 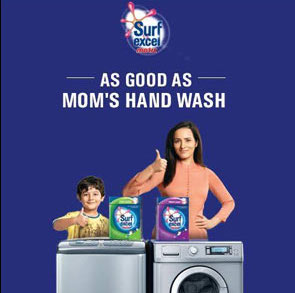 Let’s fidget with the language of this line for a minute. Why does it work? ‘Maa ke haath ka khaana’ was bad enough, and now we’re adding ‘dhona’ to the list? Men: get over this fixation with your mother’s hands. Yes, they were the only hands in the world that could comfort you when you were, say, a month old. But you’re old enough to have outgrown them now. Leave them alone.

But on to the ad: a working mother has to get on Skype to handle an urgent laundry situation, because her son’s (of course it’s a son!) t-shirt has mud on it and her father is helpless. Dear Surf Excel, disturbing a woman at work for laundry FAQs is NOT cool, yo.

Although it wins a few points for shaming a husband at a showroom for not participating in laundry, apparently we need to make washing machines easier to use because men are dumber than women and can’t figure them out. Dear Lloyd, the road to hell is paved with good intentions. A man is not different from a woman when it comes to laundry. There is NOTHING about a washing machine that is exclusively made for women to use. When men need other people to do their laundry for them for free, they aren’t dumb, they’re assholes.

Speaking of differences between a man and a woman using a washing machine, Ariel claims that 5 lakh men have pledged to share in the laundry.

The response ad shows men having fun with laundry by turning it into basketball and air guitar. This is because “men will be men”. Dear Ariel, that unfortunate phrase is very reminiscent of a common excuse for rape, remember? “Boys will be boys”? Also, we shouldn’t have to make laundry look like fun so that men will do it. Do they not want clean clothes? Also also, why are we praising them for pledging themselves to laundry by putting up dozens of photos of pledgers? Women don’t get praised for housework.

Everyone seems to think we need a campaign “strategy” to get men to do housework. And that strategy includes insulting them, shaming them, bribing them (with air guitar!) and praising them. Let’s go out on a limb and say that men are not lab rats, they don’t need carrots and sticks in order to grow up. Right, men?

Apparently, Sex in Advertising Doesn’t Sell Anymore. So, What Does?