In one of the many trailers doing the rounds for Imtiaz Ali’s upcoming film, Jab Harry Met Sejal, Anushka Sharma gives Shah Rukh Khan an indemnity bond, because he’s warned her that he’s crap with women. It says that if there’s any sexual interaction between them, ‘amounting or not amounting to full intercourse’, he won’t be in any legal trouble.

But despite the fact that the trailer doesn’t have any explicit footage, the word ‘intercourse’ has annoyed the CBFC board and its chief Pahlaj Nihalani for being too vulgar, and they have ordered it to be cut from the trailer. 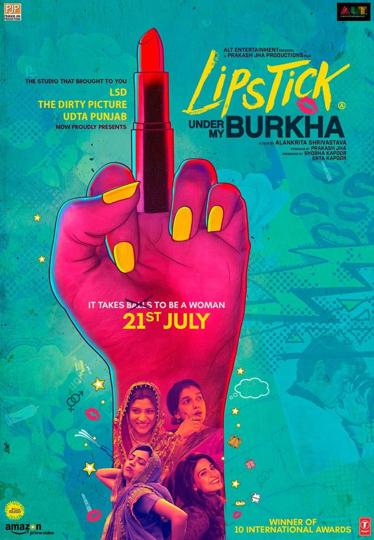 In the meantime, Lipstick Under my Burkha, a film that endured a long tussle with the CBFC but is finally releasing in July, has a new poster out. It is a hand holding up the middle finger which is shaped like a lipstick, and everyone is wondering whether it’s directed at the censor board. Nihalani flat out denied that that was possible, and according to a report in the Hindustan Times, also went on a tangential rant about the rites of passage you should complete before you can think about making gestures of defiance against conservative factions of society:

“Firstly I don’t think the finger is meant for us. It is meant for the public, for the aam junta who are bound to reject films that parade a fake social relevance in the name of women’s empowerment. You can’t empower women by making them wear lipstick. First give them basic rights, build toilets in every Indian home so that women don’t have to be publicly humiliated every day, then talk about showing the middle finger to the conservative elements whether it is the censor board or anyone else.”

An Orphanage Refused to Hire a Muslim Woman Because She Wears a Hijab. Wut?

Now That He Isn’t CBFC Chief Anymore, Pahlaj Nihalani Has No Problem with Sexy Movies