We know some people need the ice-cream and there is nothing wrong with wanting the ice-cream but sometimes you need to feed the eyes. And this week we wanted not mere eye-candy but so much eye-hot-fudge-sundaes.

To start off our morning in a shubh-shubh-dub-dub-lub-lub way, we present to you three goddesses.

Devi #1 Artist Bharti Kher has this gorgeous and strange 4.8 metre high sculpture on display in London.

Kher says, “The Intermediaries are the hybrid family of half things, spectral avatars of the goddess and shaman healers for a city: Freize sculpture park. Till October they stand here sending and receiving your wishes.”

Devi # 2 Nicki Minaj appeared fabulously on the sand while shooting her Bed video. It did lead to some Azealia Banks saying copy-cat-wah-wah commenting, “Chicken of the sea sis. Stay in your own lane. @nickiminaj lol you running out of ideas girl.” This in reference to Banks dressing up as a mermaid on the cover of her 2012 mixtape Fantasea. Bank said more things but we are still lying in the wet sand not daring to touch the scales on that beautiful tail.

Devi #3 Rajeswari Saha’s basketball wali devi. How awesome is she?

This next cool read jumps into the nature vs nurture debate, albeit in a slightly scarier framework than just examining some cute twins separated at birth. Ellison Cooper writing in CrimeReads dives into the minds and brains of serial killers, alarmingly pointing out that its been found that serial killers have a “5 to 10% reduction in grey matter around the limbic system, the region where emotions are processed”, and that brain chemistry and composition, things you (*cough* they) never had a chance to control or change, can drastically affect the ways in which people process emotions, empathy and violence. Does it make you rethink what you’ve taken for granted about justice, rehabilitation and the purpose of prison and punishment? We certainly hope not, but it’s intriguing reading nonetheless.

Did you know that there was a woman Spanish artist Salvador Dali said he loved “more than my mother, more than my father, more than Picasso, and even more than money”? Gala Dali, whom Salvador met when she was 24 and (as The Paris Review noxiously sees important to inform us) still a virgin, seems like quite the cool character. In this marvellous essay, she’s described as difficult, intense, monstrous, friendless, unpopular, hated by men and women (but more by women), habituated to spitting in the faces of those she disliked and stubbing cigarettes on the arms of those she wanted to leave her be, a collector of dolls who once cooked her own pet rabbit and a lady with the libido of an electric eel. What is left to say, really?

The Paris Review also gave us another gift in the form of free access to their interview with author Jane Smiley, part of their glorious Art of Fiction series, where she talks about writing in a state of fugue, how ADD affected her relationship with boys and her personal journey into becoming political. Obviously, the first question in this interview is “When did you get your first horse?”

In the department of who knows whether this is art, fiction or life but we love it, the clever and political Instagram account Every Outfit on SATC which has been always Team Miranda has had major joy this year when Cynthia Nixon decided to run for elections in New York. Ever since, the account (founded by LA–based designer and former VFiles fashion director Chelsea Fairless and writer/director Lauren Garroni) has been happily saying, I am a Miranda and I’m voting for Cynthia. Now the account which is followed by 250,000 people has thrown its supporter hat in the ring and is actively promoting the dream progressive candidate.

We love this poster for the sit-down with Cynthia Nixon that EveryOutfitonSATC is organised this week.

We suspect the poster was either done by or inspired by Justin Teodoro who did this lovely 7 Days of Miranda post a couple years ago.

Closer home, we want to talk about a political meeting which had a whole lot less puffer coats and pink tutus but still a lot of significance.

This week, Ms. Anjali Gopalan, the Director of the Naz Foundation, Ms. Meena Seshu, the General Secretary of SANGRAM, Ms. Aarti Pai, a member of the National Network of Sex Workers and Shashi Tharoor all met Women and Child Development Minister Maneka Gandhi with a petition regarding the The Trafficking of Persons (Prevention, Protection and Rehabilitation) Bill, 2018, signed by over 4000 sex workers. The petition basically demanded that the law must not target adult consenting sex workers or stop them from carrying out their work, and raised concerns about the “raid and rescue” model the petition attempts to put in place. We don’t know how the meeting turned out, but everyone in this photo from the meeting looks quite deeply pained. 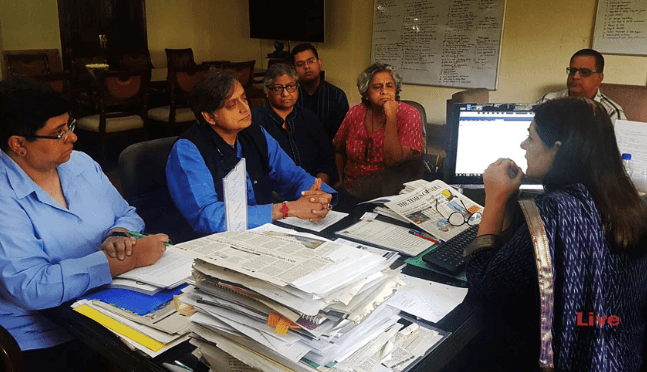 What can we call that feeling we have when someone crows about a solution that they found for you, for a problem that they have been very much part of creating? Grouchy? In a recent case we had a combo of Shaddap With Giggles (SWG). But you be the judge. For a few years Arianna Huffington has been plugging this mega concept of #StyleRepeats. Meaning wear the same clothes again. She makes some good points about how social media adds to the pressure for women to keep coming up with new looks and how much easier it is on men at work, in the wardrobe no one cares about dept. But if there was ever a sign to indicate that this might not be as big a problem for most of us who repeat our clothes for years and years, here is a relatively recent post.

Then we spent the rest of the evening adding “As I told Indra Nooyi” to everything. After that we just had to go look at the Loryn Brantz baby to giggle at.

You know what is woke af and also lovable? This wonderful photo of a dozen queer writers via writer Sharanya Manivannan at the inaugural Queer Litfest in Chennai.

Manivannan leavened the awe and awww with a pinch of shade. “Huge congratulations to Queer Chennai Chronicles. It was a wonderfully curated event, held at the progressive Kavikko Convention Centre, Mylapore (for those who think we can’t find or make more inclusive spaces in the city 😉)”

Oh, and if you are looking to follow cool updates next week as the 377 hearings resume, we have a great set of suggestions.

💥 We’ve heard lots about inclusion, and of late, “intolerance” in India. But what do these terms really mean: what are we “including” into the accepted mainstream, and who gets to be tolerant of what? This fascinating new essay in Aeon argues that “reciprocity, not tolerance, is the basis of healthy societies”. Read.

💥 If you have to ask this question about a historical lady, then the answer is probably “yes, she was”. This week, The New York Times asks whether Empress Dowager Cixi, the ruler of China at a time when “women in China were treated little better than spittoons” was a feminist trailblazer, and after reading this essay, we wonder why there was ever any doubt about it. Read.

Who Were the Women Who Helped Draft Our Constitution?