I woke up yesterday morning and saw on my phone that the demonetization death toll had gone to 55. It’s beginning to feel like a surreal, apocalyptic Hollywood movie where a virus has hit the nation and banks have become the only place where you can get treatment. People are dying as they wait in lines and things are edging on violence. Rural areas have become ghost towns. Even people who work at these treatment centers are dying.

Except this is not a movie. We’re not plagued by a life-consuming virus. Our trust was betrayed and the very thing that kept us alive: money, was turned against us like a trojan. The farce that has led to this tragedy proportions needs a soundtrack that doesn’t let us wallow in the tragedy (lest we all become Batman-like vigilantes) but keeps reminding us that it all started with a farce.

The anachronistic video is set in an Amar Chitra Katha-esque king’s court, with modern consumerist accessories and amenities. I love this video and watched it dozens of times. It’s never seemed more reflective of the mythology-inspired plutocracy we seem to be living in than it has this week.

The video opens with dude, the lead singer arriving late to the show. He was probably waiting outside a bank and has returned empty-handed. His back-up vocalist Anthony and him exchange pleasantries before they start the performance. The tone in their voices is entirely post-despair ennui. 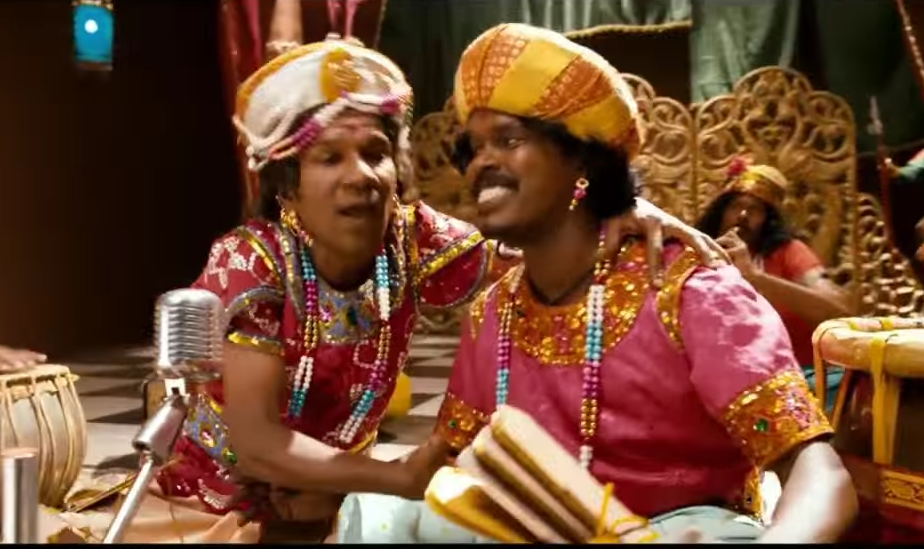 The king then throws a whole lot of Rs 1000 notes in the air and screams with the passion of a despot before smacking down on a throne. The apathetic queen blows bubbles.

His minister and his guru hipping to the hop as Anthony starts beatboxing.

The entire cabinet of ministers move to the sick (pun intended) beat. The dancers in their golden tops and shoes make a formation.

Guruji video-shoots the dancing girls on his mobile phone. 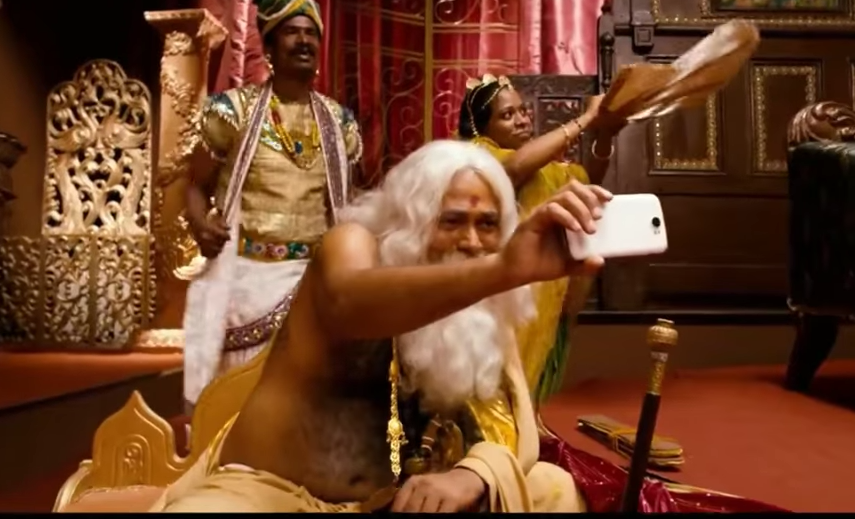 The dude opens with multiple repetitions of the chorus line to match rhythm with the beat: “Kaasu, panam, thuttu, money-money!” Full marks to the genius who did the subtitling for flexing his own poetry muscle, especially in the chorus where he takes the repetition of kaasu-panam-thuttu-money-money and subtitles it with as many synonyms for wealth as humanly possible — showing us so many different forms that money takes.

Then the dude gets to the first two lines, a metaphor for intoxication — which he needs to be able to deal with the farcical nature of this tragedy. He can’t wrap his head around it.

Using an umbrella at night,
I’ll fly to a great height.
Can’t make head or tail, I’m puzzled,
On my hands I walk muddled. 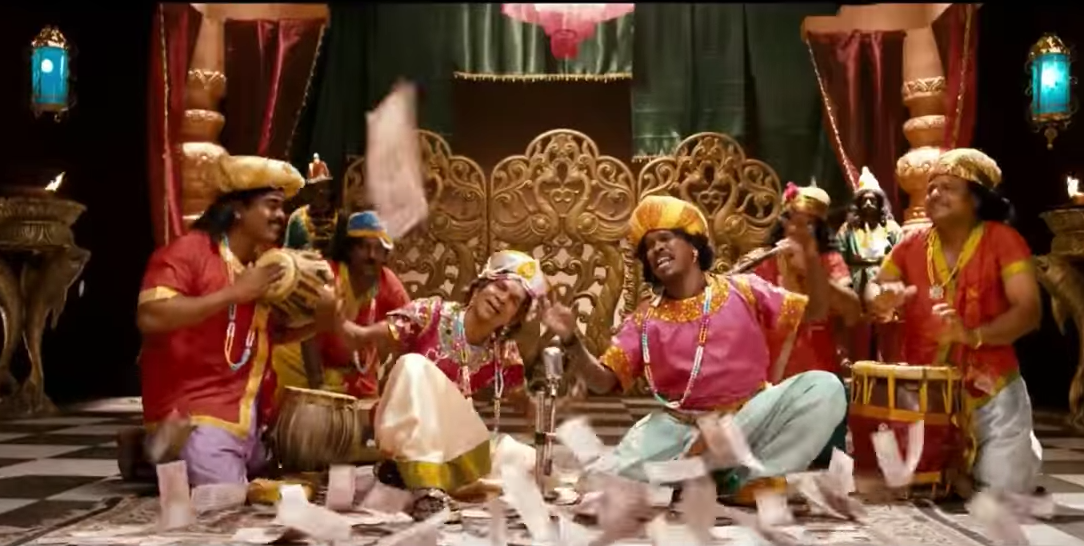 Finally, from the great height the dude can see clearly. His clarity doesn’t need more clarification, so here it is.

Into the workaholic’s pocketful
The spendthrift makes a hole.
To him numbers don’t matter;
He is going to spend it all.

As long as the king gets to do his bidding, he doesn’t care about the numbers. He assumes that the people are addicted to working and they’re going to be working no matter what he makes them work for.

This one is a special note to all those congratulating themselves for the patriotism that they require others to sacrifice for: The one with the power and money will not care about others’ pain and will preside arrogantly over the proceedings, being sure that what he is doing is right. Such a person is a monkey and it doesn’t make sense to felicitate a monkey with a garland.

Bundles of currency notes pour
Blinding my eye to the core.
The money made from selling my dog
Barks bow-wow-wow… It’s so funny.

This stanza is particularly creepy this morning. The dude sings of being blinded by the rain of bundles of currency notes. And yet he had to sell his pet dog for some money. That money is now eating at his conscience. Alternatively, this can also be seen as the dude singing about selling his loyalty for money and now that money isn’t letting him live peacefully. 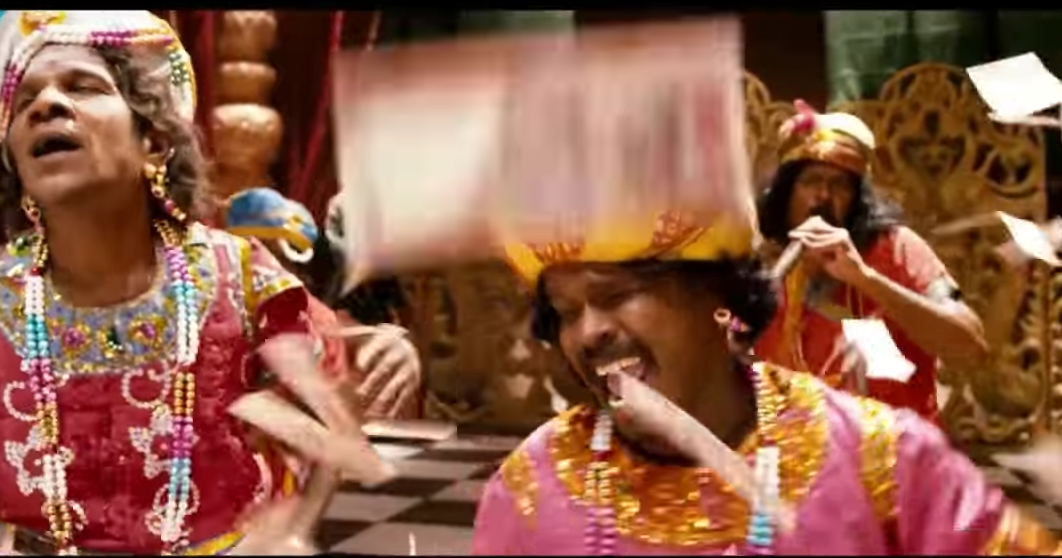 This is followed by Anthony singing out a high-pitched and intense version of the chorus line as he starts to lose his mind when a shower of notes currency tranquilises the expression on his face.

Following which, the king descends from his throne onto the dance floor of the court in a massive display of vulgarity. His feet wide apart, his dhoti up and his hips thrusting. His entire court joins him and so do dude and Anthony. 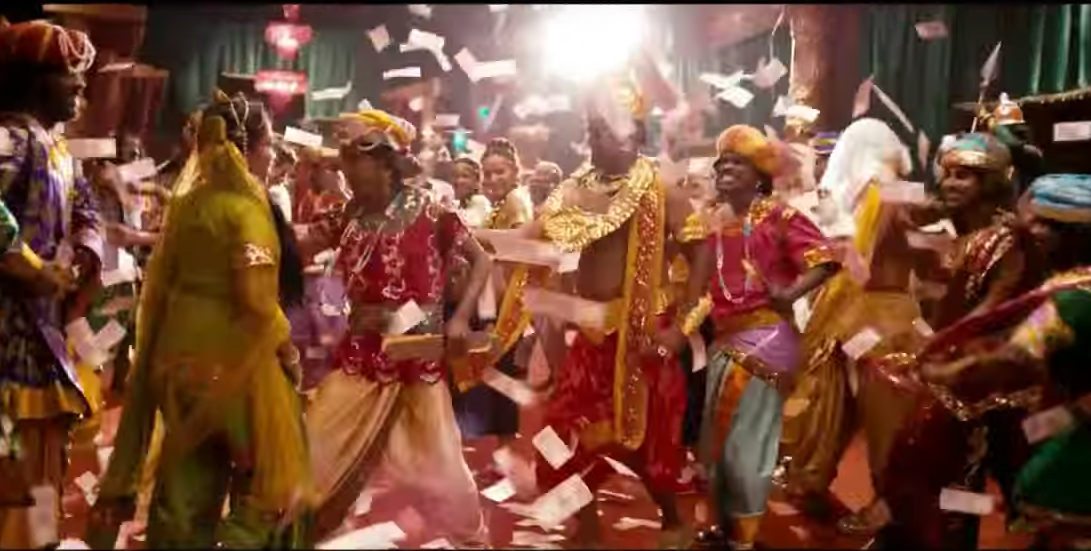