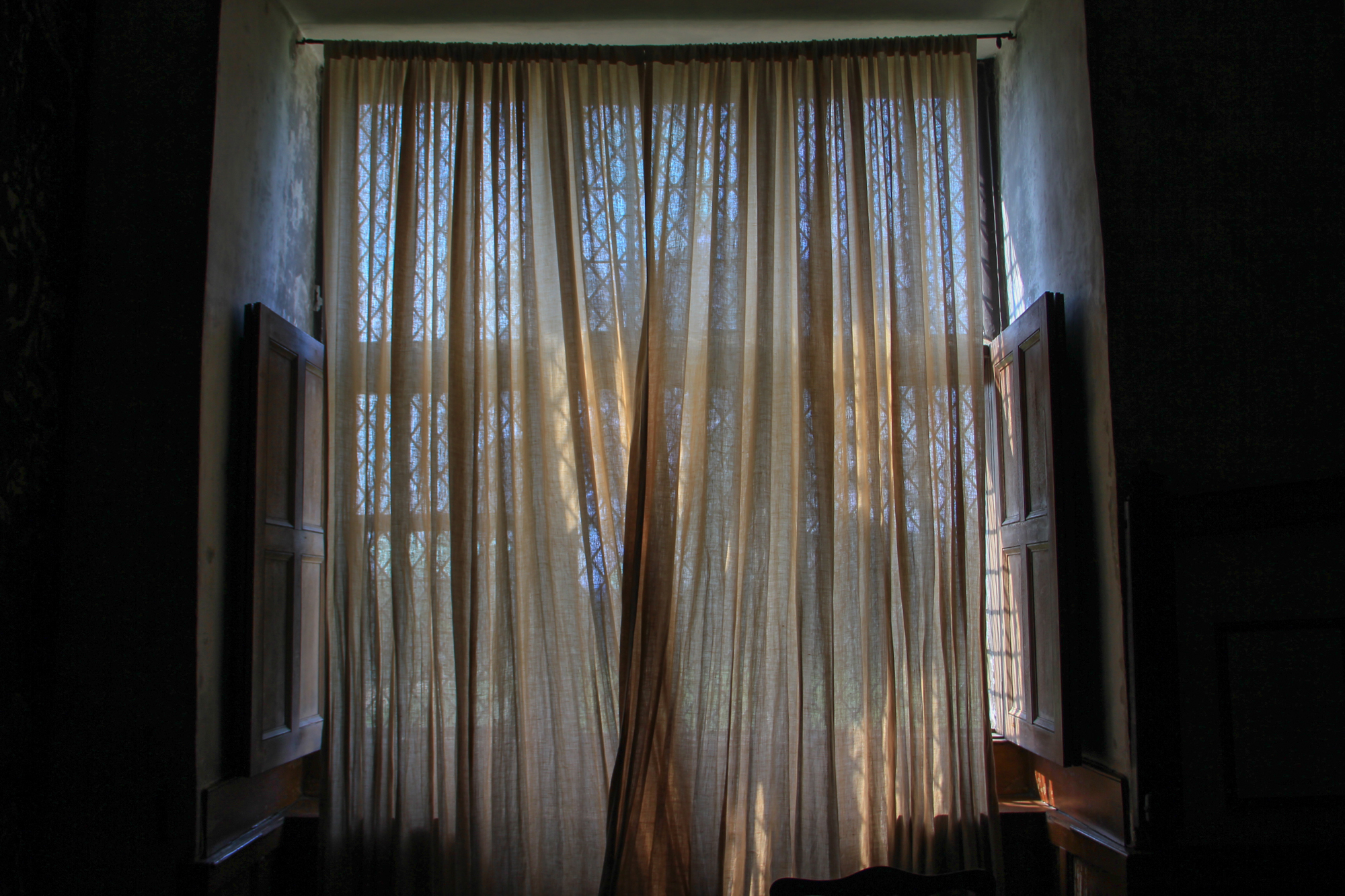 “I need more curtains! Yay!” is what I texted my friend N, exhausted and excited, as I completed a much anticipated move to a new house.

Well, “new”, in a manner of speaking. The house itself is old enough for creaky wooden stairs, dusty grills, really really terrible kitchen shelving.  But here’s the thing: it has windows. Lots of them.

A while ago, depressed by about two weeks of house hunting with a limited budget and expensive tastes, I opened a bright yellow gate that squeaked in protest, climbed a flight of uneven stairs to a door painted magenta. A sweet-faced young woman, cradling a young child in the crook of her hip, opened it and welcomed me in.

I fell in love.

French windows with dusty glass let more light into one room than I’d seen at the place where I’d spent the last seven years.  I reminded myself to proceed with caution. One does not decide to move houses just because of windows.

Of which, apparently, there were plenty to be had.

Plus, there were those stairs.

Creaky, creaky stairs that felt like they were going to come apart any minute. That wound up a sunlit path—more windows!—to a terrace. From which the view was an unmitigated disaster of concrete and glass, but hey, it was a terrace.  Visions of a terrace garden began to dance before my eyes, and I ignored the small voice of reason and responsibility that reminded me that I am a proven plant killer.

The kitchen was a mess.

I don’t care, I whispered to the horrified voice in my head which sounded suspiciously like my father’s.  At least you won’t be bored when you come to visit, I thought: my dad is an obsessive cleaner, and I could see that there would be plenty of work for him here.  Silver lining, meet cloud.

I knew which my favourite room would be long before I moved in a single box: that first room, with the windows and the wooden beamed ceiling with the tiled roof and skylight. I could see myself there, long before I occupied it:  sprawled across my three-seater; or curled up; or hunched over the glow of my laptop screen, there – here – where I’m now writing this from, my peculiar typing style cramping my hand as usual, but not my brain, in which something has, finally, been unlocked.

And now, it’s three days since I’ve moved in, and I’m settling in, testing out how this space works, getting used to the fact that I no longer bump into things; I get to joke now that I need curtains. For the first time in the last seven years, I can shamelessly indulge in my love of home furnishings without guilt.  I’ve spent a happy hour or two imagining the colours and patterns of the curtains I’d like. Green? White? Blue? Everything light and ephemeral, patterns that speak of happiness, I think, because I want to let the light in. But that can be next week: this week, there’s only (stained, dusty) glass between me and the world.  So here I am, waking up when the dawn light falls on my face, and falling asleep with the dull glow of the street light outlining the contours of these new spaces.

It’s  late on a Wednesday night, and it’s just the usual Wednesday night, the new usual Wednesday night, because doing the old things in the new place clothes it with a newness that I’m half ashamed to still be excited by: so I’m catching up with my TV shows, and quite by accident, I turn my head to look out of the window and … there’s a man, standing next to a parked scooter, right under the street lamp—no attempts at concealment necessary, it seems—and he’s staring at me. I don’t know how long he’s been standing there, just watching me.

It’s 11.15pm, I’m alone in this large house, with all its windows (points of entry, my brain helpfully supplies), my neighbours downstairs probably wouldn’t be able to hear me screaming, and there’s a man, standing casually with one hand on hip, other on his white scooter, staring at me.

I pick up my phone (later I will laugh at myself about this) but at that time, there was this half formed thought that perhaps if he thought I was going to call a friend or the police, he’d just leave.

But he’s still standing there, staring.

So here’s what I do next: I turn off the computer. It takes an excruciating minute, that entire minute where I sit turned away from this man, but knowing he’s still looking at me. I wait for it to turn off, I unplug it, rearrange the cushions, pick up my laptop—he’s still there, still watching—and then, then I turn off the light and walk as normally as I can out of the room, into the other, inner, room.  Standing still in the center of my living room, my heart pounding, I wait for it:  the sound of his scooter driving away. After a minute, I hear it, loud in that silence.

I don’t turn on any of the lights.

I go back into my room, the one with the windows, that were to let the good things in, and now through which other things have come in:  fear, anger, violence—because yes, this man has committed an act of violence on me—I look through those windows to make sure he’s gone.  I go to each of the bedrooms and look through those windows as well. I check the bolts. I pad up the stairs and check that the door from the terrace is barred.

Then I go into the bedroom, the one which I haven’t slept in yet, because I loved that other room so much, but tonight I will sleep here, because it’s inside, hidden, and the windows have curtains.

Yes, it takes me a while—an hour, two—to fall asleep.

In the interim, I check the locks three times.

There are a lot of things I think about lying there in the dark:

Was that a random stranger? (Maybe)

Has he been following me before and I didn’t notice? (Maybe)

Will I find him doing this again? (Maybe)

Will he be waiting for me somewhere? (Maybe)

Can I tell my parents? (No)

Should I call the police? (No use?)

Can I ever sleep in that room again? (I don’t know)

I’m learning this house now, slowly. I know which stair creaks, I know how much pressure to exert on the handle of the second shelf of the kitchen cabinet to open it. When I switch on the bedroom light, I know the thirty-second sputtering. There are new routines: my wakeup call is my neighbor walking around her garden, her screechy, voluble Tamil yanking me from dream space to real. The first cup of tea for the day taken, steaming, to the terrace where the bougainvillea blooms miraculous, pink. My parents visit, my father cleans with a vengeance. There’s art on the walls. I get a new carpet.

There are these tics I’ve developed—a reflexive check out of the windows at that streetlight; my heartbeat speeding up a little when I hear a scooter pass by.

I’ve made myself sit in that room, read in it, and write in it. I haven’t yet managed to fall asleep in it. I tell myself that this too, shall pass. And if it doesn’t—well, nobody needs to know.

The streetlight stands, grey and ordinary, amidst the green that has sprung up after the rains. The curtains flutter blue and white under the creaking ceiling fan, thin enough to let the light in, opaque enough to keep the world out.

This piece was written at the Ladies Finger writing workshop, Write Like A Girl, which was conducted earlier this month.