An uncle who worked on minorities’ labour rights once mentioned that he wouldn’t let his son be around a transgender teacher. “There’s scientific proof,” he said viciously, “that they influence young boys to become feminine.” Last month, another uncle, incidentally one who has written extensively about caste bias in education, declared unequivocally that he backed the Republican stance that transgender people shouldn’t use girls’ bathrooms in schools. “What if a student is raped?”

These aren’t the only people I know who spend their time advocating the rights of minorities, and yet are utterly repulsed or unnerved by transpeople. But their uneasiness and paranoia are particularly heightened by the prospect of a transperson’s presence around children. This is deep-set enough that transpeople are consistently treated with hostility in education — memorably, a British teacher committed suicide in 2013 after unpleasant scrutiny from the media prior to a sex change operation.

This is a problem that has acquired a new urgency in India. In December, the academic Manobi Bandhopadhyay, tried to resign from her position as principal of Krishnagar Women’s College because of the animosity and persistent disrespect shown to her by colleagues and students. In an interview, she explained that the majority of people at the institution were against her: “I was tired of confronting regular agitations and gheraos by students and teachers. I came to this college with new hopes and dreams. But I have no hesitation to concede defeat.”

Bandhopadhyay came into prominence after becoming the first transgender college principal in India, in 2015, and received media coverage from national newspapers that praised her achievements around this time. Although much noise was made about the college’s welcoming approach to her, the responses of many local people interviewed about her success varied from shock to the eagerness to use her as a ‘case study’. That should have been a sign.This is a problem that has acquired a new urgency in India. In December, the academic Manobi Bandhopadhyay, tried to resign from her position as principal of Krishnagar Women’s College because of the animosity and persistent disrespect shown to her by colleagues and students. In an interview, she explained that the majority of people at the institution were against her: “I was tired of confronting regular agitations and gheraos by students and teachers. I came to this college with new hopes and dreams. But I have no hesitation to concede defeat.” 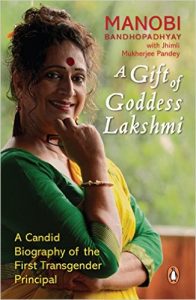 Published last month, her memoir, A Gift of Goddess Lakshmi, focusses on another time in her life. It recounts in detail her harrowing experiences as a lecturer of Bengali Literature at Vivekananda Satavarshiki Mahavidyalaa in Jhargram, West Bengal. Life had never been a cakewalk for Bandhopadhyay, as she grew up struggling to come to terms with her transgender identity, flanked by conservative and judgmental family members on the one hand, and cousins and neighbours who sexually exploited her, on the other.

But while her time as a student at Jadavpur University had a certain freedom attached to it, as she moved around in privileged and open-minded social circles, things changed drastically after she went into teaching. Vicious catcalls as she entered the campus at Jhargram were followed by physical assault from male colleagues: “They would lurk in every nook and corner and pull my hair and clothes… They pressed my nipples so hard that I screamed out loud.” Things escalated rapidly, and she was eventually accused of being “a negative influence”, and even sexually harassing students, because she procured a sanitary pad for a female student.

Despite receiving support from certain students, she left with a clear sense of the unanimous opinion of her colleagues, which she summarises in her book. “They were naturally stunned by my presence and openly declared war against me, threatening to ruin my career since no hijra had the right to become a professor! … No one as lowly as a hijra should be allowed to teach in a college, share the same staff room, toilet, and facilities.”

How would increasing the diversity of our educational institutions ensure that other transgender academics aren’t forced to navigate countless obstacles, from sexual harassment to unwarranted litigation, and salacious vitriol — all because of their sexual orientation? For one thing, if students saw more trans-people in positions of authority, it could help to shatter misconceptions that are foisted onto them as children. (These include notions about dressing ‘appropriately’ according to gender. Bandhopadhyay was instructed to wear a sari instead of a salwar kameez by the Students’ Union in Jhargram.) They could also be effective role models for transgender children. Last year, for instance, a British transgender teacher described how various students had written to him seeking advice about confusions over their gender, and claiming that they were reassured by his presence. In her book, Bandhopadhyay too, recalls hearing similar things from students: “Many tell me that I have opened the gates of freedom for them.”

Perhaps it would also alleviate the perception, rife at least in India, that the transgender community has to stick together rather than explore multiple professions. At one point in Bandhopadhyay’s memoir, she recalls visiting a transgender commune in Bengal, and felt like an outlier there too, simply because of her choice of a teaching career. “The fact that I was pursuing academia, first by teaching in a school and then in a college, and that I had links to the media and the world of culture was anathema to them.” And on the other hand, she felt constantly undermined and labelled as unsuitable by colleagues in her workplace, saying in one interview last December, “People might say they are ready to accept us in the mainstream. But deep down, they are just not ready to do so. They’d more comfortable seeing me with a begging bowl at traffic signals and not as a principal.”

Bandhopadhyay’s book ends on a note of elation after she was settled in her job as a principal. But her resignation in December, a year-and-a-half after taking on the post, made waves in the media and puts a different spin on the book, so much of which is focussed on her perseverance against colleagues pressurising her to resign. Ultimately, the college requested her to return, and she resumed her position there on 2 January — apparently to a very warm welcome from students.