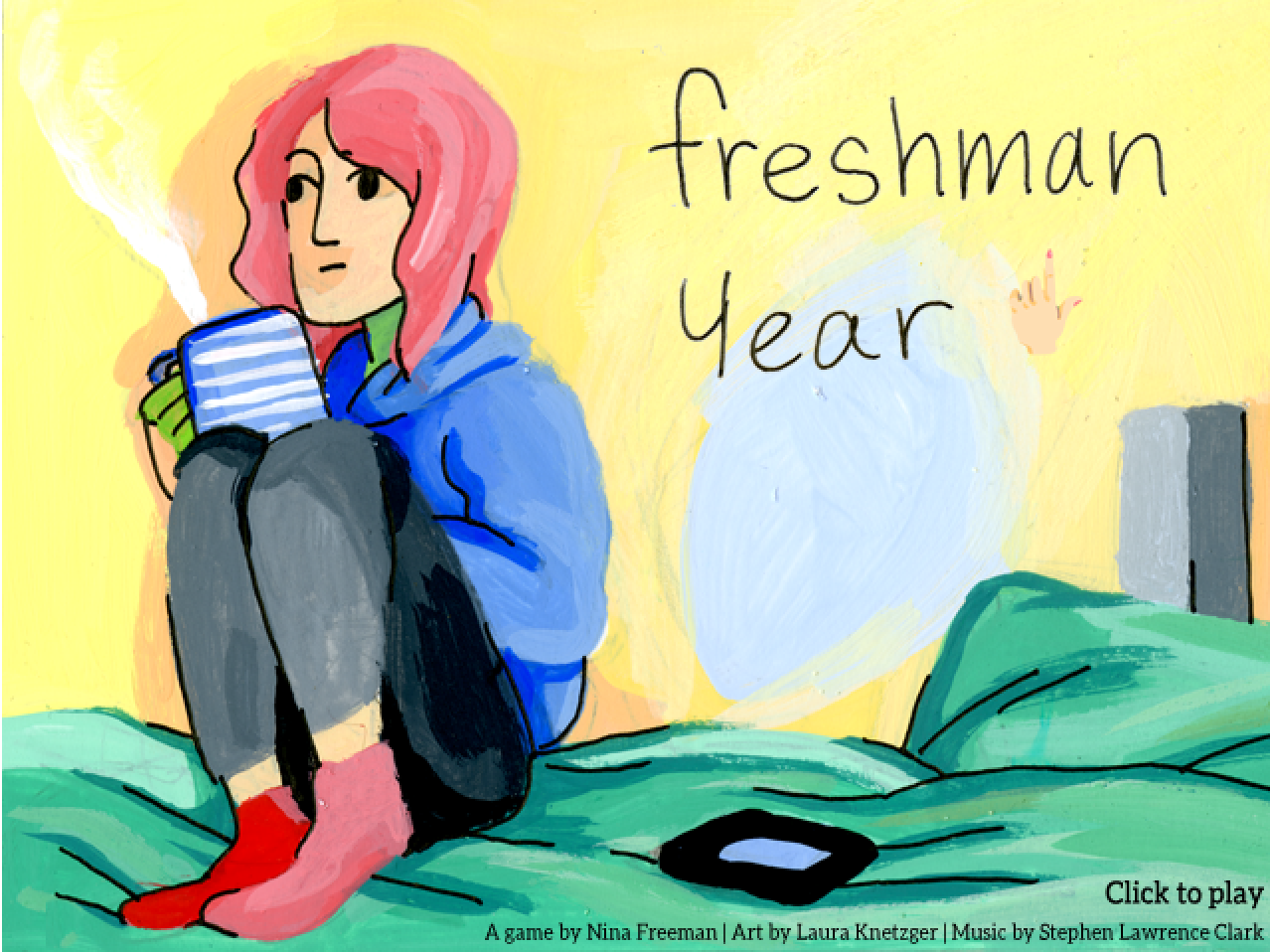 Nearly every woman I know has encountered sexual abuse at some point in her life. Sharing stories of abuse can sometimes bring despair, because it can often feel like no one escapes abuse, but the acting of sharing of sharing one’s personal experience can also bring relief. And sharing is what Nina Freeman does in her autobiographical game Freshman Year, describing the events of one fateful night in the life of Nina, the game’s protagonist.

Freshman Year is a very short, choose-your-adventure style game (where your choices as a player create new narrative pathways for you), whose gameplay is very simple: you select one of two narrative choices and the game presents the resulting storyline for you to continue on. It doesn’t require any special skills (such as the dexterity and hand-eye coordination required for even the most basic console or first person shooter games) or devices, and can be played on your laptop or computer for free. In the game, Nina shares her experience of abuse during her first year of college, or freshman year. The entire game took me around 3 minutes to play, and it is meant to be replayed as the choice tree creates new scenarios based on the combination of choices selected by the player.

For me, the main appeal was the simplicity of its structure, which used an everywoman narrative that seemed familiar while being peppered with personal flourishes. The most relatable part of the game was Nina’s relationship with her best friend and roommate Jenna – a fun, flakey party girl who is Nina’s only close friend, who invites her to a party but only arrives right at the end. Jenna was a template friend during my 20s, and many a drunken party was spent waiting for a Jenna to arrive. 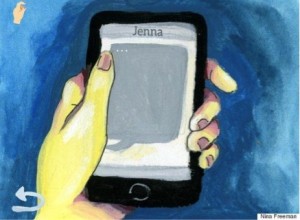 In the game, the prime element of tension and “normalcy” are the erratic texts from Jenna to Nina. There’s just enough contact to ensure Nina stays and waits. But I was beginning to get bored with the repetition of checking a phone with no new message, and I considered dropping the game because “waiting for Jenna to arrive” had basically defined my 20s – and I’d be damned if I played a game where I did the same thing.

And then IT happened.

Jen arrived, but she came in a bit too late, and we ended up staying at a place in which Nina wasn’t comfortable, just because she got there late. Nina was too concerned about losing a flakey friend to ask to be dropped home because she felt scared to go alone. And the whole episode of abuse, when it happened, was in a fraction of the time compared to the mindless phone-checking and the slightly trite conversations with friends, which is exactly how abuse in a social setting feels like: something shocking and shameful snuck in between mundane social rituals.

Since Freshman Year is an autobiographical story about Nina’s own abuse, I feel conflicted about bringing my own experience in to complete the narrative experience. I understand that this type of game expresses a specific and personal story, but as a player, I did want a more fleshed-out narrative.

Freshman Year felt more like an interactive comic than a game with agency to me. Since the structure of the game was so simple, it made the story more predictable. For me, a game with agency would allow me to make meaningful narrative choices with clear outcomes. Here, since multiple outcomes were not part of Nina’s experience, the form of an interactive comic is better suited to her story. The replayability element didn’t sit well with me for this game. Additionally, the antagonist “Bouncer” was foreshadowed a bit too strongly at the beginning for the reveal to be an effective plot twist. As the narrative is hinged on the unexpectedness of the abuse Nina faces, the foreshadowing of the Bouncer felt heavy-handed to me.

While the goal of the game is to show how unavoidable the act of abuse was for Nina, through the fact that replaying it always led to the same outcome, I felt like the choices were a bit predictable, and didn’t offer enough complexity to make replaying it exciting. A game that follows a similar structure and uses this replayable quality as a narrative device humorously is Save the Date.

Games as autobiography are a relatively new phenomenon, and tend to use simple structures to tell complex stories as vignettes that the player can experience.

The first autobiographical game I ever played was Dys4ia by Anna Anthropy, which described her experience of gender dysphoria and transitioning. Even though it was a short game, the first time I played it, it felt like a sock to the groin – and this at a gameJam – a quick-and-dirty game making event (similar to a hackathon) at a makerspace (an open-to-community prototyping and fabrication space) in San Francisco amidst the chaotic din of drinking games.

The walk-in-my-shoes nature of autobiographical games makes them powerful vessels for complicated topics, and as a relatively new addition to the existing game genres, the ludic language of autobiography is still being explored.

Mohini Dutta is a game and interaction designer who inherited Mercury’s winged slippers early on and can’t get them off now. She can be found ranting about the patriarchy on Twitter @freyadutta.

As a Child, I Read Alone. As an Adult, I Look Forward to Playing Board Games