“’When you say you’ve got the Cloak and clothes…’ said Harry, frowning at Hermione, who was carrying nothing except her small beaded handbag, in which she was now rummaging. ‘Yes, they’re here,’ said Hermione, and to Harry and Ron’s utter astonishment, she pulled out a pair of jeans, a sweatshirt, some maroon socks, and finally the silvery Invisibility Cloak… She gave the fragile-looking bag a little shake and it echoed like a cargo hold as a number of heavy objects rolled around inside it.”

If Hermione Granger was a boy, she would’ve lazily pulled out Harry and Ron’s clothes from the bottomless pit that her jeans pocket would’ve been in Harry Potter and The Deathly Hallows. But by virtue of being a woman, she had to enchant a purse with an Undetectable Extension Charm instead. For us ordinary folks, it’s even more frustrating when we have to make do with tiny pockets that barely fit keys, or worse still, fake pockets.

Don’t believe that this is a universal struggle? With changing times, women have learnt that they deserve pockets in their clothes too and have been actively asking for it with hashtags like #PocketsForWomen and #GiveWomenPockets.

Sample this delightful video by NBC Left Field, in which show producer Deborah Basckin takes us through a cursory history of women’s pockets, the need for them to be functional and how the adjective ‘pocket-sized’ has absurd connotations that only women will understand.

Women everywhere are finally calling out fake pockets, unnecessary pockets for men, and a lack of pockets in children’s clothes. In short, “Women’s pockets are a thing. Just ask the internet.” Like Basckin aptly says.

If you do venture into these hashtags, prepare to be bombarded with every imaginable response to the movement, from conspiracy theories like Twitter user Danielle Evans’ that “If you compliment a woman on her dress and it has pockets and she doesn’t immediately say ‘Thank you, it has pockets’, she’s a spy, FYI.” and Amy Rocks Out, who said, “The patriarchy fears what we could do with both hands free.” An interesting thought, indeed. Our favourite one was this tweet by Mary Sue, who brightened up our day with this factoid: “The reason women’s clothing doesn’t have pockets is that male politicians around the time of the French Revolution were afraid women were carrying and distributing seditious and/or erotic writings. No, I am not joking.”

My wife’s wedding dress had pockets. During the ceremony, she took the rings out and you could hear audible gasps from all the women in attendance.

Evans definitely got the part about women’s excitement about pockets right. Twitter user Christian Long added his two cents: “My wife’s wedding dress had pockets. During the ceremony, she took the rings out and you could hear audible gasps from all the women in attendance.” Sounds about right.

You know what quietly angers me? Seeing a boy being able to easily and smoothly slide a phone into his front pocket and sit down comfortably. #givewomenpockets

Of course, all this humour is rooted in real outrage, which is just as relatable. Twitter user Savi made us clench our fists when she brought to mind what ‘quietly angers’ her which was, “Seeing a boy being able to easily and smoothly slide a phone into his front pocket and sit down comfortably.” We’ve all been there.

If you’re still wondering why women are making a big deal about something that might seem inconsequential, this issue runs deep, just as a good pocket should, by the way.

Priyanka Vinod, founder of the clothing label Millennial Mode says, “People think, ‘Why are we making a big issue about pockets?’ There is an under the table sexism going on, which is not acknowledged by many. It’s so subtle, that you won’t even know until you have been in the situation.”

This hide-and-seek of pocket sexism has its roots as far back as the 17th Century, and its evolution is chronicled in this entertaining Mic article by Rachel Lubitz. Read it to know how women had to tie a sack like a bag around their waist under their huge gowns, rendering them unable to take anything out of their purse until they were effectively semi-naked, and other such infuriating funnies.

However, this trend changed by the early 20th century in the West when Marlene Dietrich introduced pants in women’s clothing with pockets (tear-jerking moment).

Then came the late 20th century when the fashion world was taken over by everything skinny fitting. There goes our beloved pocket in favour of tight fabric pressing into our skin. And as we already know, till today, nothing much has changed.

For those of you who still haven’t grasped the sexism encompassed in the absence of pockets in women’s clothes, some heavy reading on the political significance and oppressive nature of not providing us pockets is covered in this Racked article by Chelsea G Summers.

One often hears men complain about how women have so many options in terms of fashion to wear, but no one understands that we need pockets! Instead of hiding a fanny pack under our skirts, we just carry huge handbags now.

The fashion industry has monopolised this situation by promoting handbags. “Don’t have a pocket? Buy our handbags.” So now we buy clothes and then handbags that must somehow match our bizarre palate of clothes. And no, it doesn’t end there. Then we buy small purses that go into a bigger bag, for things like change and lipstick. We’ve all been on vacation when our friends or partner notice our big bags and suddenly, we’re tasked with lugging around their wallets, sunscreen, water bottles and other junk. As Charlotte P Gilman helpfully points out in the New York Times in 1905, “Women have from time to time carried bags, sometimes sewn in, sometimes tied on, sometimes brandished in the hand, but a bag is not a pocket.”

The demand for pockets has been gaining momentum offline too. Vinod says that women are walking in and asking to “have pockets in their kurtas, saris and salwars,” which would surprise many of us who have never hoped for a day when Indian clothing for women would have pockets. Vatsala Kothari, co-founder of the label Aapro, cites the example of one of her clients who had a pocket in her bridal lehenga. She talks about how women are immunised to the absence of pockets in their attire that they don’t even ask for it. “I had to tell this bride that we have pockets in our lehengas if you would like to see, and it made her extremely happy just to hear that!” she says. 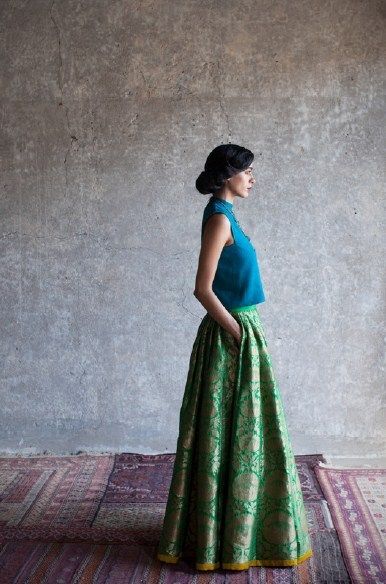 Delving further into the practicalities, we did wonder if the demand for pockets would be inconvenient with regards to cost or fit.

It turns out, no, the cost of production won’t change much because of a piece of cloth attached to it. In fact, women might pay just to have space to keep stuff in their garments.

But Niharika Kumar, designer for the online retailer AJIO says that the pocket bag is designed the same for men and women, but space gets altered in the process of making pants. “Women are generally provided with five to eight inch of pocket space but if you consider having deep pockets in skinny jeans or tight-fitting clothes, it will bulge out of the dress,” she says.

It’s true that skinny jeans don’t have pockets simply because they are not skinny. Jeans that are straight and not skinny, “have ample pocket space,” says Niharika. Not in our experience. And meanwhile what about palazzos, skirts and outfits that we don’t need to peel off? Where are the pockets?

While most fashion labels have not acknowledged this persistent demand for pockets (thanks to a recurrent internet joke we call this situation “The Pantriarchy”), there are a few who have come to our aid. Fabindia blesses their kurtis and salwars with pockets, which is nice. But meanwhile, in men’s fashion, veshtis/dhotis are now available everywhere with velcro and pockets (and presumably a secret compartment to store banana chips).

Our eternal quest for pockets is summed up in the wise words penned in an 1899 New York Times piece. “As we become more civilised, we need more pockets. No pocketless people has ever been great since pockets were invented, and the female sex cannot rival us while it is pocketless.”

Cut Out Your Pockets Entirely with Scissors. Why? Fashion, Apparently

As a Therapist, I Dress to Focus on My Own Needs

My Family Sometimes Asks Me to Cover Up and Perform, But That’s to Reduce Scars and Bruises.

Why Do Bras in Public Terrorise Some People?