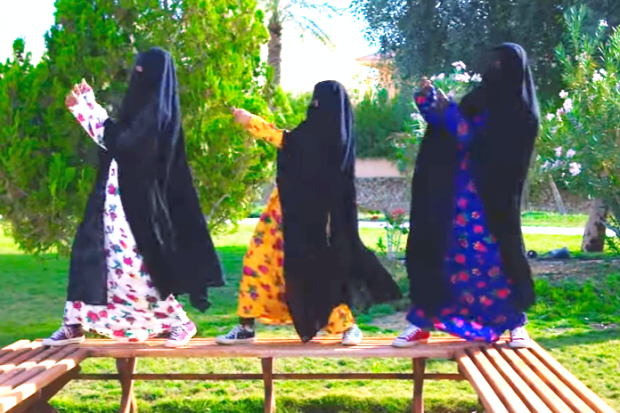 Picture this. A trio of niqab-clad women at the local amusement park in bumper cars, skating, playing basketball, dancing a riot. This is the frothy, incendiary material of Saudi artist-filmmaker Majed Alesa’s latest music video for his song Hwages (concerns). The song is a rant against the many rules imposed on women in the patriarchal Saudi Arabia. One of the lyrics they chant in the catchy song translates into, “May all men be erased as they’ve giving us mental illness.”

The opening scene of the music video shows three fed-up  women getting ready to be driven by a man-child. This is a firm jab at the Saudi ban of women drivers and just as unsubtle jab about the male guardianship laws in Saudi Arabia where little boys have more rights than adult women. The rest of the video is the women’s escape from reality aka recreation. Everyone’s favourite American president, Donald Trump makes an appearance as a cardboard cut-out in the “House of Men”. Coz Saudi ain’t the only place where men are making women feel ill, the video implies.

If you are in the mood for a equally rebellious (if lightweight book) about the lives of young Saudi women, definitely get a copy of Banat al-Riyadh (Girls of Riyadh). Written by 23-year-old Rajaa Alsanea, a decade ago, the then controversial book features a memorable episode of four young women running around town, one of them dressed as their ‘male’ chaperone. Two years ago, Alsanea, now a doctor, spoke cautiously about progress that she has witnessed in her lifetime and her continuing annoyance at the male chaperone situation.

Meanwhile do watch this masterpiece.