HomeNewsSaudi Woman Arrested For Posting a Photo Without H ...
December 15, 2016

A young woman named Malak al-Shehri was arrested in Saudi Arabia after she posted a photograph of herself on social media without the abaya, the body-length robe and head scarf that women in the country are forced to wear. Shehri’s photo on Twitter, posted on 28th November, had her in a jacket and dress, announcing that she would leave her house for breakfast without wearing her abaya. 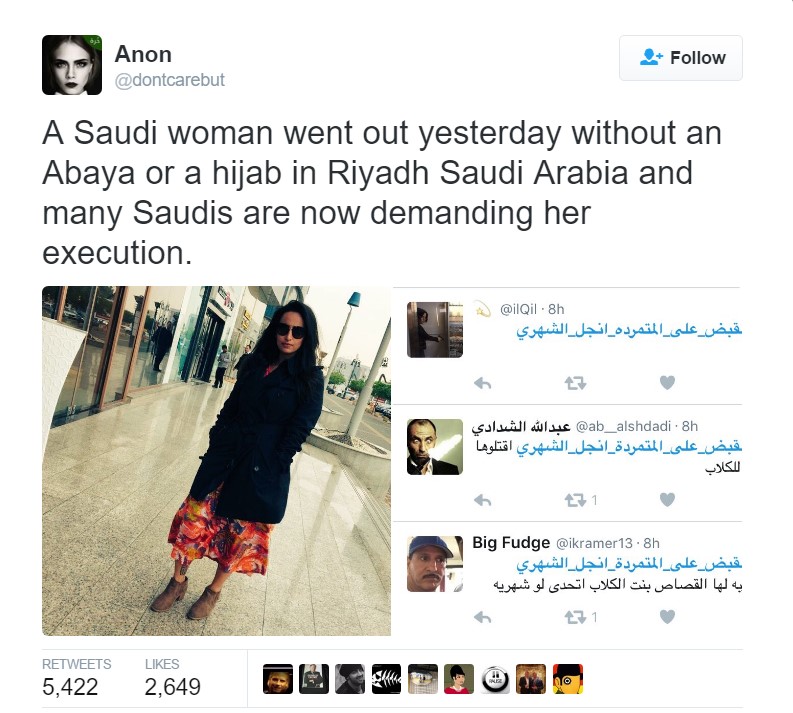 Several Saudi Twitter users reacted furiously, with one user tweeting, “Kill her and throw her corpse to the dogs” and another exclaiming, “We want blood.”

Saudi Arabia imposes a strict dress code on women and although there is no formal legislation in place to prevent women from driving, deeply held religious beliefs undermine women from doing so, and in 2014 two Saudi women were directed to a terrorism court for defying the ban. Women have consistently protested these informal codes for decades now, and the first major protest in 1990 saw women driving around the capital Riyadh before they were arrested and subsequently imprisoned. A Change.org petition from earlier this year revived the debate around women’s driving, while three years ago, a campaign called ‘Women Drive for Change in Saudi Arabia’ attracted immense support. In late November, the crown prince Alwaleed Talal tweeted in support of Saudi women driving. “Stop the debate. Time for women to drive”, he said.

Shehri removed the picture from Twitter after the backlash. However, she did receive support from other Saudi Twitter users, with one person even comparing her to Rosa Parks. People also tweeted that it was high time the orthodox legislation was questioned.

Last year, a frenzy was created on Twitter when Michelle Obama visited Saudi Arabia and did not use a headscarf. While Islam suggests that all women should dress modestly and cover their hair, Saudi Arabia and Iran are the only Muslim majority countries which legally enforce a dress code on their women.

In Iran, women have come up with innovative ways to protest the hijab. In May 2014 journalist Masah Alinejad created a page on Facebook called My Stealthy Freedom to protest 3.6 million women being warned, fined or arrested for not wearing their hijab. It encourages Iranian women to submit videos and images of them without their veils. These videos capture both women without their hijabs and the reactions of men who respond positively to the illegal act. “As a kid my brother was a symbol of freedom that I didn’t have. How he was free to run in a green lovely farm.” she told BoredPanda in an interview. She has, however, had to endure immense backlash, including the Iranian state releasing a fake report that she was raped by three men in London in front of her son because she was not wearing her hijab in March 2015.

Under King Abdullah, women in Saudi Arabia were appointed to the Shura Council, allowed to vote and run in the municipal elections. But Shehri’s arrest clearly indicates that Saudi Arabia’s women are still being plagued on a regular basis by the country’s patriarchal laws.

An Orphanage Refused to Hire a Muslim Woman Because She Wears a Hijab. Wut?