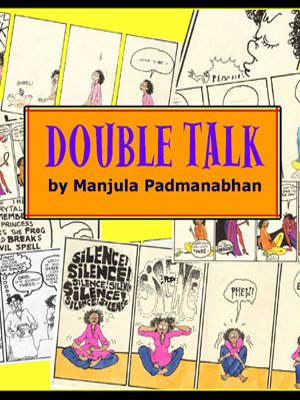 A taxonomic anxiety gripped me as I began writing this piece about Manjula Padmanabhan’s Suki drawings. How to name it, as it were. It definitely isn’t a graphic novel, nor is it mere cartooning, and though it may have begun as a comic-strip titled Double Talk in Vinod Mehta’s Sunday Observer sometime in 1982 and continued, after a hiatus, in that form in The Pioneer into the 1990s, the narrative never curtsied in decorous surrender to the strict demands that newspaper readers make of the funnies.

I had never thought about all that before, perhaps because I came across Suki only in its third life, as a compilation brought out by Duckfoot Press in 2000. It was a fortuitous find, made on a day when I had dashed precipitously into Premier Book Shop after the usual remedy for workday boredom—heading for Koshy’s—hadn’t worked because it was drizzling and all the resident bores were in full attendance. Shanbagh had propped it up against the uncomplaining spines of various coffee-table books devoted to the Impressionists, and so opening the book to browse did not require the usual propitiations of the many gods of gravity. I bought the book two minutes later—possibly the quickest decision I’ve ever taken—for one sensuous reason. It had the most attractive lettering I had ever seen—a zaftig, exuberant spilling-over of text into every possible nook and cranny of each panel. 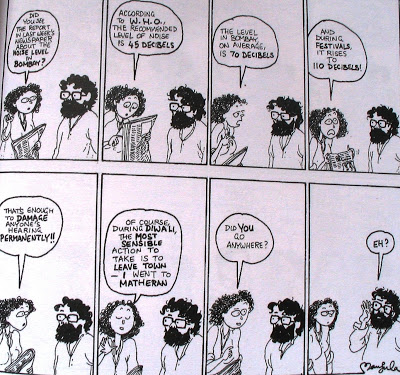 It took me a little longer to light on the volume’s less obvious pleasures, possibly because it never lent itself to the sort of zippy one-sitting reading that is possible with compilations of Peanuts or Calvin and Hobbes. I usually remember that I have the book once every two or three years, and what follows is a long, unhurried week, where I read a page or two and fall, after wincing at the terrible wordplay in the titles, into a pleasant reverie brought on by the changing volumes of frizz in Suki’s hair, by the comfortable sit of her kurta, by the manner in which butterflies summoned by one of Sweetie’s love potions resolve eventually into heart-shapes, or by the sassy autorickshaw-wallah who might only go to C’naat Pless one day, or earn on another day the airfare from GK I to Defence Colony by the simple expedient of a via Meerut.

Another thing that I wonder about is the response Suki received—preserved in the last few pages of the book. Mehta received about sixty letters from readers of the Sunday Observer, writing in from Ahmedabad, and Durgapur and Cannanore, most of them frothing at the mouth about his decision to persist with Suki. What was it that pissed these people off? They never quite say. The kindest of these letters is from Bill Aitken, who writes from Mussoorie to ask for an ‘increment’ to Suki’s bosom, because “three years is a long time for admirers of a growing lass”.

Suki may contain the occasional references to the megabucks that Vikram Seth made for A Suitable Boy, or the arrival of Santa Barbara and the Barbie Doll in the 1990s. Its primary victory is in avoiding the trap of a narrow topicality, and the irresistible slide into the ephemeral that such topicality might bring. Its themes take it some way beyond its time—how a woman may go solo and still live and have fun, the resilient presence of the absurd in the everyday, the daily subsidence of conversation into tennis-match aggression, the habitus that urban Indians build within the English language even as they lose mother tongues and multilinguality. When I read Persepolis for the first time, it slid easily into the narrow, tightly-packed bookshelf in my head, possibly because Suki had burrowed in quietly first and made that space. 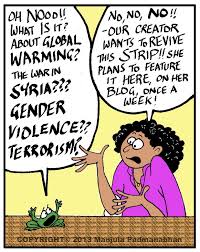 Suki was revived as a weekly blog-post earlier this year, after many years of silence. The new avatar is all-colour and does not yet seem to have lost any of the old commotion despite this surrender of black-and-white rigour. My initial anxiety has also subsided; I now hold that Padmanabhan made the small error of inventing the web-comic much before the Interwebs were actually possible.

PLUS:
For more on Suki, look out for Gokul Gopalakrishnan’s essay on Double Talk‘s lasting influence on Indian comics. Coming soon in Pulp Quarterly.