HomeWatchlistCinemaThey Were More Honest When They Were Calling this ...
September 21, 2015 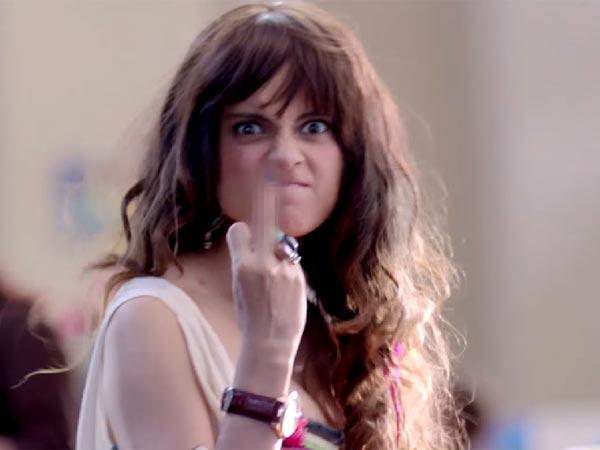 Here is a public service announcement to all people who can’t get this through their thick skulls: When a woman or a girl says, “Nope, nada, nil, no thanks, not interested, nu-uh, nah, please leave me alone, I mean seriously, leave me alone, can you leave me alone?” don’t persist by stalking her physically (or on Facebook), sending her gifts that she will not want, calling her, emailing her or texting her.

Just slowly back away, one foot at a time, and Leave. Her. Alone.

But Bollywood has never understood this. Their tried and tested formula of portraying true love is having a guy, from whom you could squeeze out an entire glass of sleaze juice, follow a pretty girl everywhere until a disastrous villain harasses her. The girl can never defend herself, what with already having such a long dupatta to manage, so the sleaze juice maker saves the day. A simple “thank you” from the girl will not suffice so she gives her heart instead.

Katti Batti takes this concept to a whole new level. Maddy or Madhav Kabra (Imran Khan) gets the girl Payal (Kangana Ranaut), but the girl later breaks up with him. The guy is now depressed out of his wits so he concludes that the only solution to his problem is that he must stalk his ex until she comes back to him, because a girl can’t make an independent decision for herself. And during this whole stalking period, the female is portrayed as a bitch because she is not reciprocating. Doesn’t that sound like, I don’t know, life?

This movie even introduced an entire ‘band’ whose members were all people whose hearts got broken. Their sole purpose (apart from lip syncing one good song, “Sau Aasoon” which has an MTV unplugged vibe) was to push Maddy into going after his girl. No! Don’t! Stop promoting his lecherousness! Stop allowing him – aww man, I’m too late.

So while most Bollywood films teach you how to get into a relationship, this movie tells you what to do after the breakup so you can stay in the relationship. 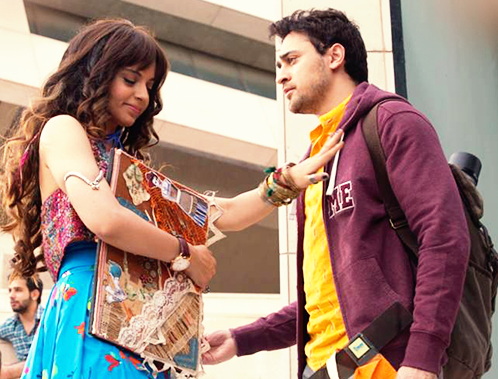 The movie begins unnoticeably; Maddy and Payal meet and get together in a very rom-comy way. Payal starts the relationship by saying, “I’m not in this for a serious relationship, are you cool with just time pass?” and you’re like, oh wow, finally a girl who is saying what she wants out of the relationship. Maddy agrees, not because he wants to, but because despo alert.

But Maddy obviously can’t continue with this façade after a point and so in front of his family and his friends announces to Payal how she will never find another man who will love her like he does, putting her in a very uncomfortable spot. The mother also gives her blessing for her son’s ardent whims leaving Payal no option but to give in.

Maddy and Payal graduate from college, move in together and continue having a live-in relationship without *gasps while clutching pearls* getting married. In a way, this movie tries to, unintentionally, portray modern Indian relationships. Today’s cinema may be a lot more open about lovers being in a relationship (or rather, not pretending to have sex behind bushes anymore) but everything is still coated with a generous layer of misogyny.

In one scene, the protagonists argue and because Payal is so upset, Maddy tries to show what a responsible, caring partner he is by giving her a packet of Whisper pads “with wings.”

B) It reinforces the idea that a woman is so emotional because there is a war happening in her uterus.

Halfway through this movie I realised it was a horrible mashup of 500 Days of Summer with a sprinkling of The Fault in our Stars (yes, mostly because of the oxygen tube that Payal sports in the latter half of the movie).

But here’s the major difference.

In 500 Days of Summer, when Summer (Zooey Deschanel) dumps Tom (Joseph Gordon-Levitt) he does not follow her, stalk her or try to find her new address. He wallows in his own self-pity and depression till he realizes his true calling and follows his dream to become an architect. Inspirational, right?

The Fault in our Stars was about a consensual relationship between two teenagers, who talked like literature graduates and didn’t treat cancer like a crippling hindrance. So in the end, when one of the characters silently leaves the screen, it touches a part of you that you didn’t know existed before.

Katti Batti borrows from the above movies, and then decides to pretend it’s Opposites Day. After furious stalking by Maddy, we find out that Payal broke up with him because she found out she had cancer and didn’t want to burden him, and break the heart of the love of her life with her sickness. Here the villain is cancer, and sleaze juice maker is just around the corner. Again, a simple “thank you” would not suffice and so she dies in the arms of her lover while you cringe.

Also, we hear, this movie’s original name was ‘Saali Kutiya‘.  This title alone would not have survived the Bechdel test, forget the rest of the movie.

I cannot believe I missed a very crucial episode of MasterChef Australia (Marco Pierre White came, people!) for this eye-opening piece of cinema.

Nadia Lewis is a journalism graduate from Manipal University and an intern at The Ladies Finger.

23 Responses to “They Were More Honest When They Were Calling this Film ‘Saali Kutiya’. Stalking is Stalking, Bollywood!”