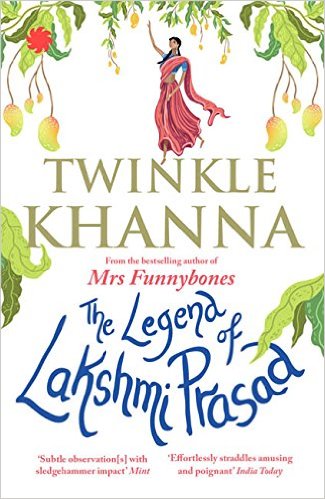 Twinkle Khanna’s second book, The Legend of Lakshmi Prasad, a small collection of four short stories, is heavily padded. And how is it padded apart from the elder-friendly large font? Most of its 230 pages are devoted to one of the stories – a fictionalised account of Arunachala Murugananantham, the tireless inventor of a super-cheap, sanitary pad-making machine.

Okay, now that the public service announcement and bad pad joke has been made, we can move on to the matter of Khanna’s writing itself.

In a Bollywood that is now wholly a family business, you wouldn’t be blamed for thinking Khanna got her newspaper column for being famous and semi-talented. (In the same way an acute observer once commented that the British royalty are not required to be as good-looking as ‘professional beauties’ like movie stars.) You’d think this, if you hadn’t read her.

The truth is that Khanna’s columns are excellent. They have the deftness and lightness of touch a pastry chef would envy. Two years ago, an accomplished writer friend called me saying, “I am going to stop writing. This is so good.” She’d just read Khanna’s column about Karwa Chauth, and it really was that good. She had effortlessly navigated the annual obstacle course that every feminist is supposed to pass (me, I only get away with it by saying that I’m Malayali and don’t know how to pronounce Karwa Chauth). The form, even more than what is said in the column, tells you not to take Karwa Chauth more seriously than it ought to be. Her work consistently avoids the finger-wagging and self-congratulation even the best columnists can fall into.

But this book, her first stab at fiction, is oddly old-fashioned and tone-deaf, as if written by someone who hasn’t read fiction in a long while. The eponymous story The Legend of Lakshmi Prasad particularly has the feel of a retro children’s tale. It begins: “Sandwiched between the river Kosi and the holiest of rivers, the Ganga, there lies a village surrounded by thousands of trees…” I kept waiting for the punchline.

Salaam, Noni Aapa, the story of an elderly woman in Mumbai who discovers love, also has a similar timestamp-bereft quality despite the occasional prop like a VCR. Along with wonky analogies such as the chaste yoga teacher thinking of his wife’s relatives “who kept walking through his door, like it was the revolving entrance of a motel.”

Khanna’s stories are often descriptive in a way that seems like they were unconsciously written for the camera. (A fairly common affliction in our decade. A friend who runs writing workshops for children is shocked each time he reads stories that include lines like, “Then there is sunrise.”) This has mixed results.

Occasionally, Khanna can be deliberate and hilarious. “She was meant to lie down on her stomach and lift her legs alternately, but she had modified it by making Anand ji lift her leg and lower it for fifty counts.” This is the non-judgemental, comic voice that runs through the Mrs Funnybones column. This is the writer that reclaims the male writer tradition of the recurring wife character, the invisible Mrs She Who Shall Not Be Named. See what she does with the prop of Famous Unnamed Husband Akshay Kumar back in a 2014 column: the column begins with her helping him locate an enormous wooden club in the morning “that he swings around his head every morning in the exact replication of some Mahabharat combat moves.” Then she has run-ins with a dude on the beach who won’t scoop his dog poop. In the end, she offers up her mudgal-swinging husband as a street side enforcer to the PM to aid his Swachh Bharat efforts. More recently, Khanna set out to avenge the body-shaming of Serena Williams during Wimbledon 2016: “So, last night, when the man of the house called out, ‘Come to the table for dinner!’ Hunching over my computer screen, I absentmindedly said, ‘Not yet, I am trying to find a picture of Leander Paes’s nipples!’ This reply, of course, was met with stony silence.” I am indebted to Khanna forever for this image.

This new book is primarily the novella The Sanitary Man from a Sanitary Land. If you only have a vague idea of Arunachala Murugananantham’s real-life journey as an inventor, the adventures of Bablu Kewat are bound to absorb you, despite Khanna’s segue into the state of education in post-colonial India. Otherwise, the story unspools in a first-draft manner.

Given the overall amateur quality of this collection, I was terribly grateful that the elderly Noni Aapa is not punished or deprived of love for the sake of piquancy, this being what all of us fiction writers do as novices. This gratitude lasted till the end of story #3 If The Weather Permits, where Khanna kills her delightful heroine Elisa. The pity of it is that this is the only story in which Khanna’s natural and contemporary style surfaces. Elisa Thomas is good-natured, feckless and inspires many fun sentences. Sample this one at the point when Elisa’s parents and in-laws are trying to persuade her to return to her mentally ill husband Chacko: “And as Pothen Thomas started thinking about all the paperwork he would have to do all over again, Chacko looked up from his plate and in a strange moment of perfect lucidity said, ‘Elisa, you have a kind vagina.’”

So I was doubly scandalised that Khanna kills Elisa off in a random car crash. I did not see this comeuppance coming for her cheerful, following-her-bliss manner. Even less than I saw the imminent incarceration that was to come to Renuka Sharma at the end of Ratika Kapur’s The Private Life of Mrs Sharma – when she impulsively bumps off the young lover she met on the Metro. Kapur leaves it ambiguous, the will-she-get-away-won’t she-get-away giving it the redeeming quality of black comedy. But Elisa is as surely bumped off as Russian adulteresses affected by the railways.

Khanna is likely to write more fiction, and I suspect it will get better because she seems like someone who likes to think about how to tell a story. And three books down the line she is likely to make many throwaway jokes about this one.

How to say Happy 85th to Nancy Drew: Our Three Recommendations