HomeHealthWhat To Expect When You’re Expecting: The Uncensor ...
July 22, 2013 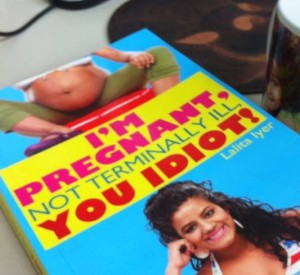 As the duchess of Cambridge goes into labour, and Britian awaits with bated breath and ‘Labour’ jokes, pregnancy seems to be the flavor of the month. Or maybe it’s just me. Being seven months pregnant has my antennae tuned into such trivia more than ever. Not that the world’s letting me forget I’m pregnant.

The other day I was taking a walk outside my home in Kolkata. A woman who lives a few houses down the lane saw me and stopped to talk. At first it began with questions about my bump and how I’m feeling. Suddenly she came forward and groped my belly with both hands, telling me that she’s only feeling where I’m wearing my pants. Before I jumped back, she let out a shout, “Oi ma! Ei rokom porley hobey na!!” (It won’t do if you wear it this way).

Her voice was shrill and loud and I was sure people four houses away have heard her panic and were making their way out to check out where I was wearing my pants. Another woman passing by decided to stop and join in the conversation. Then the first woman, taking mercy on my low IQ, explained: if I wear my pants this low the baby, for lack of room, will climb its way up to my chest and then I won’t be able to breathe. (The other woman, who by now has checked out where I’ve worn my pants, also shook her head, without taking her eyes off my belly.) I try imagining my baby climbing up my digestive tract. Creepy! It’s a baby, not an insect.

And so when a friend suggested I read a book titled, I’m Pregnant, Not Terminally Ill, You Idiot! it was natural that I grabbed it with both hands.

“At every point you are silently passed through a radar,” she says to me on the phone. Four months into her new job as the managing editor of Filmfare, Iyer is visiting Hyderabad to attend the 60th Filmfare award ceremony.

I have heard of the radar Lalita is referring to — ‘constantly being upgraded or downgraded, labeled and slotted in society. The single friends rule you out of all the partying, shopping and discussing man problems. The mommies welcome you, feeling, at last they will have one more to vent their frustrations to. The family, who never cared two hoots earlier, suddenly showers you with new found respect and elation, having stamped you with their approval of “she’s now one of us”. The workplace starts planning ahead as if you’ve ceased to exist.’

When Iyer, who had just given birth, returned to her media job after a 12-week maternity leave, she was greeted by her boss with this: “I actually thought you wouldn’t come back. I stayed home for eight years after my daughter was born. Do you really need the job?” Swallowing it, she decided she’d quit only after giving it one final shot of balancing work and the baby. The next two months were a rude shock into post-maternity work life.

“Most companies treat motherhood as some sort of hobby or incurable disease the woman has suddenly developed.. (They) don’t know how to deal with the ‘strange’ needs of new mothers. Of having to nurse. Or expressing milk. Or bringing their baby to work. Or being excused for an hour in the afternoon so they can go home or to the day care and check on their babies” writes Iyer in the book which she began writing after she walked out of her glitzy media job.

The idea to write the book (with its eye grabbing title, and a cover photo of a very pregnant Lalita, sitting all dolled up in a bikini top and purple crocs) occurred to her when the journey of pregnancy, which began for her at the age of 40, exposed her to myriad bizarre responses from family, friends, doctors and especially her workplace.

Pregnancy, in India, is always made out to be a happy rosy ride that every woman longs to experience. Right from the era of old Hindi movies, a woman is portrayed discovering that she’s pregnant when she suddenly holds her stomach, about to retch and covers her mouth with her saree pallu in the most feminine way. The husband, noticing she’s unwell, rushes to her worriedly and her sindhoor bhara maang head lifts up and with her eyes lowered and her lips curved in a coy smile, she says, “mein aapke bacche ki ma banne wali hoon.” Fast forward nine months and a new born baby cry echoes through a hospital, causing jubilant shouts of elation by family members. The teary eyed emotional mother is shown heaving an almost orgasmic sigh when the baby sucks her breast for the first time. From here on, feeding and raising the child is life’s sole purpose for the woman. These images form the earliest notions of motherhood for most of us.

Iyer’s book takes you behind the scenes to show you the real stuff – the total loss of privacy and other pregnancy discomforts, work bitches, 101 ways you could feel short changed by your hospital at the actual moment of giving birth, life post the bump and post natal depression, peer pressures of milestone mommies, boob wars, the trials and tribulations of ‘expressing’ breast milk, the myth of the hands-on- daddy, stunt-performing-mommies and finally finally why it was all worth it. Iyer tells her story through much humour and entertaining anecdotes making the reality check into motherhood softer to chew on.

One of the most interesting chapters of the book is ‘Much Ado about the Boob’. Being a believer in natural weaning, Iyer writes about negotiating with her office before she went on maternity leave, that upon her return she would need a separate room to express milk and a designated fridge space to store it (For those unfamiliar with pregnancy lingo, “express” refers to using a breast pump to suck breast milk and keep it in cold storage so that it can be fed to the baby later). Because of her seniority she was given the cabin keys to a separate conference room with a promise that she wouldn’t be disturbed during the times she was expressing at work. Although this was seen by her boss as a great privilege being granted to her, Iyer wonders why women never ask for this basic necessity at workplaces. Her expressing ensemble had nine crucial parts and one large bag to fit all of them. “I am sure if someone really saw me assembling it all, they’d have thought I was a bomb-maker,” she writes.

Proper dedicated breastfeeding is the most natural way to give anti-bodies and complete immunity to a child. When most mothers, itching to get back to their careers and back into their cleavage enhancing halters, switched to formula in a few months time, Iyer decided to diligently breastfeed for three and half years. Two months post her rejoining work, one time as she was expressing and was asked to hurry up as no other conference rooms were available for the day, she decided to quit. “Not the nursing. The job,” she writes. Today her four year old son has no food allergies and has felt no need to see a pediatrician even once.

We live in a “deeply breastfeeding unfriendly society” writes Iyer. Everyone from fellow mommies to mother-in-laws to extended relatives have advice on when a woman should stop nursing and switch to formula. It ranges from six months to one year. How can we help? “The first thing to do is to not ask a mother when she plans to stop feeding,” says Iyer.

The lack of public nursing spaces adds to the embarrassment of displaying your breast when you’re out. And no, Rohit Bal feeding ponchos don’t help.

“It is very difficult to point out exactly when motherhood begins,” writes Iyer at the beginning of her book.

“Is it when pulling your boob out in the public becomes the most natural thing to do, and you don’t care if the taxi driver is taking a good look in the rear-view mirror while your partner is desperately looking for something to cover you with?”

As Iyer’s hotel doorbell rings informing her that her pick up is ready to drive her for the star studded award ceremony where paparazzi will soon blind her with camera bulb flashes, I ask her what she worries about most as a parent. After some silence, she says, “I often wonder if I will be able to give my child the kind of robust childhood I had.. The kind of touchy feely organic childhood. Its harder with technology to keep them close to the real stuff.. reading books, playing with mud. I want him to get his hands dirty. You have to engineer a lot of outdoor time. It’s harder to create real experiences in today’s time.”

Shriya Mohan is a journalist and researcher.

My Body, His Rules: Pregnancy Still Isn’t the Decision of Indian Women

3 Responses to “What To Expect When You’re Expecting: The Uncensored Version”