One of the English phrases that has always confused me is the one about something ‘being better than a poke in the eye with a sharp stick.’ Apparently it means that the thing is not great but it is just about better than nothing.

This week the elderly mayor of the Japanese city, Maizuru collapsed while giving a speech at a sumo event in Kyoto. Several women first-aiders came running to give emergency treatment to the mayor who apparently was having a stroke. The sumo judges decided to promptly have a (metaphorical) stroke too and yelled that the sacred ring was not open to women. According to the judges a poke in the eye is better than a woman and a stroke is much better than a woman. I imagined they were thinking “self-preservation? Mein kya achaar hoon?” Just you know in Japanese, while Anthony Bourdain filmed their thoughts and made a docu called Jiro Dreams of Nihilism. 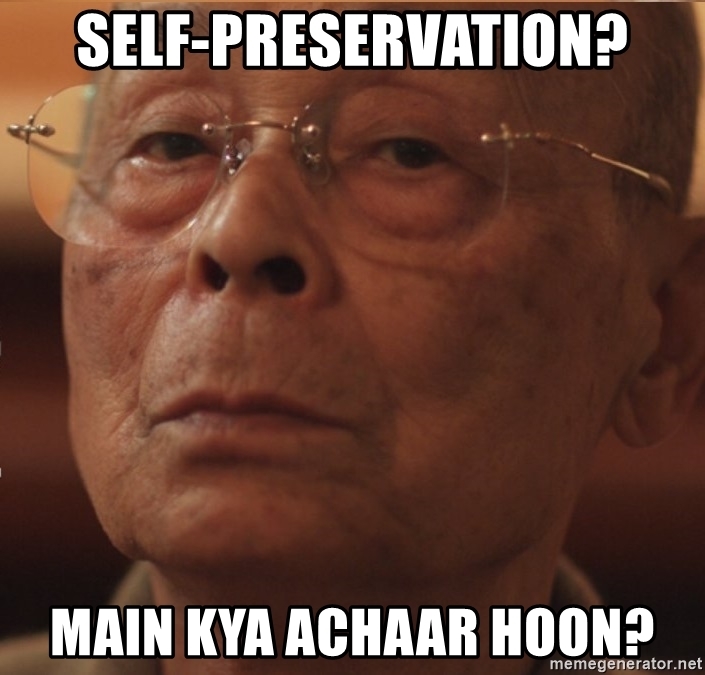 This has, naturally has led to a pretty big debate in Japan about gender. According to the Guardian, ‘Nobuyoshi Hokutoumi, the chairman of the Japan Sumo Association (JSA) and a former grand champion, later apologised for the incident and expressed his appreciation for the women’s help. “In a situation that could have been life-threatening it was an inappropriate response. We offer a sincere apology,” said Hokutoumi, who is also known as Hakkaku, the name of the sumo stable he heads.’

For some reason the fear of the female touch reminded me of a friend who said that as a young person in a sports management firm she had to escort kabbadi players to a high-end salon where they got pedicures as part of a promo for the salon. She said that she was wrung with pity and giggles as the hard-as-nails kabbadi players squealed with pain when their feet were being scrubbed and pumiced.

Before we giggle at the sumo wrestlers and kabbadi players though let us quickly take stock of all the male-only activities around the world, which continue to be male-only on account of it being so sacred. If only someone had given Calvin the idea of declaring his tree-house club (GROSS: Get Rid of Slimy Girls) a religious angle then he could have safely kept all the girls away. Suzy Derkins wouldn’t (even if she ever wanted to) be able to enter the club without committing blasphemy.

In India, GROSS clubs are particularly abundant. Conducting funeral rites, entering sanctum sanctorums of temples, entering some temples at all, mosques at large, joining clergy in most Indian churches, several dance forms are all forbidden to women. Because God.

Once while hanging out with some female Christian theology students, I felt like I was watching one of those Netflix dramas called “A Group of Spunky Women Break Into A Male-Dominated Profession.” The women were from different denominations and in mostly in the final year of their study. A couple of them were discussing the brand new opportunities that had appeared because their church had just started allowing individual dioceses to decide whether to appoint female priests. One of them had got the equivalent of campus placement since a south Indian diocese had asked her to join as soon as she was done with college. She was careful to talk about it without gloating but one of the others was utterly fed up with the news. In her denomination, forget being officially employed, she was not allowed to even do a casual Sunday lecture in the way knowledgeable and passionate laymen all over Kerala with no formal theological training were allowed. I didn’t want to tell her that I’d just a few years ago met a fellow who at age 19 told me that he was leaving the Kerala church he had grown up in, her church, and was converting to Islam because he couldn’t stand the ‘corruption and debauchery’. What corruption and debauchery, I’d asked, with great gossipy excitement. “You know, they are discussing the possibility of introducing women into the clergy.” I had said aiyyo and run away at high speed. Years later, I heard that he converted back to Christianity but more interestingly his wife had used a unique escape route from him. She joined a beauty pageant for married women and escaped him from the greenroom.

But let us discuss less important matters: what is it about the female touch that makes sacred things profane? I am sure we can find very erudite explanations about purity and impurity. But I think it all comes from allowing men who were once that boy in your tuition class to become heads of institutions and arbiters of rules. I mean that fellow didn’t wash his face but judged you for not having a magnetic pencil box and he makes the rules now? He gets to marry people, bury people, divorce people, bathe god and dress god and whether you have successfully shoved your sumo rival out of the 15-foot diameter “dohyo” or made your sumo rival touch the ground with any part of the body other than the soles of his feet. Just think about it. That guy from your maths tuitions is in charge of the world. He is the one who decides whether the Karni Sena is just expressing their feelings and Dalits who protest the diluted SC/ST act should be punished. He is the one who decides what is a serous subject and what is reality or realism. It’s as if life has become that evening when you went to play at his house and his rulebook for Monopoly and Scrabble and Lock & Key and Running Race were all ones he wrote and changing them would make God angry.

Perhaps the response should be for women to learn from the civilizationally adept, aka men and look about for all the things they enjoy or desire and declare them sacred. Positions as CEOs, all seats in Rajdhani and Shatabdi trains, Google maps, forewords for books, Centre Court in Wimbledon, the whole state of Goa and the first share of all meals everywhere in the world. Don’t touch these things, you, or God will be really upset.

Perhaps the real question is if this incident in Kyoto was indeed a sign from God.

Imagine women of faith everywhere falling to their knees and asking “God, why did you want Ryozo Tatami, the mayor of Maizuru, age 66 to almost die when he could have been saved by us? What did this test mean? Why did you want to make your humble servant witness so much suffering? Is it because of Nisha’s friend who laughed at the kabbadi players getting a pedicure?”

And then God replies, “Betis round the world. Put your hands in the air and repeat after me. Women should abandon the project of trying to save men.”

I want to say Amen but you might think I am working a bad pun in so I won’t. See you in the dohyo. Or in Goa.