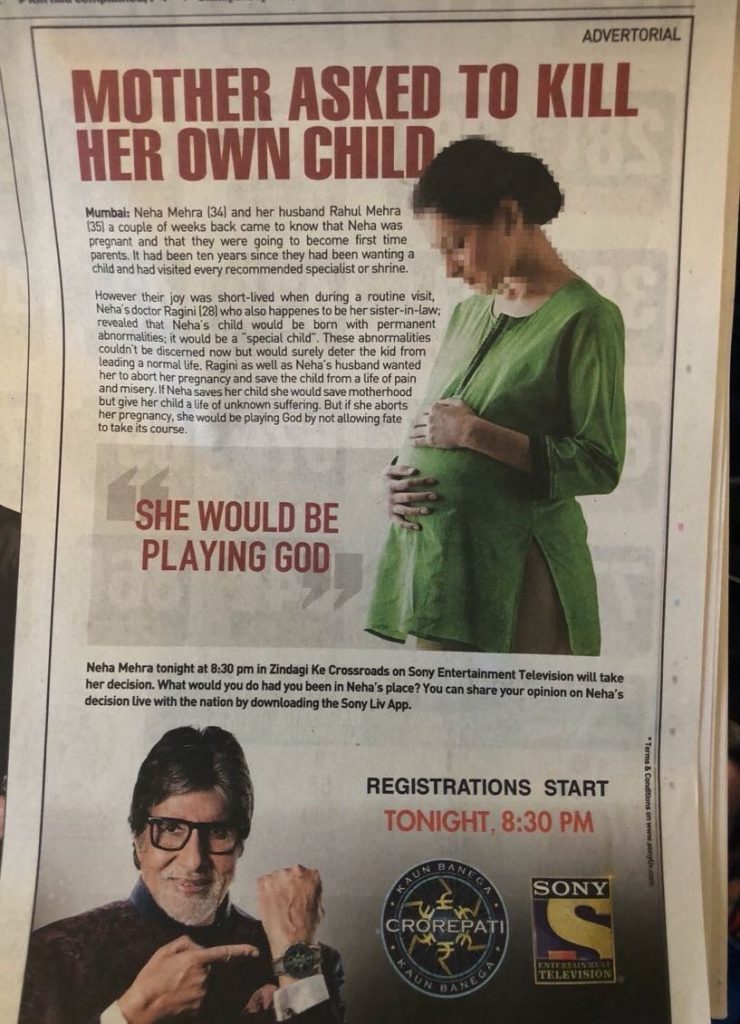 “I understand. I gave up my vote at ejaculation.”

Jim Brockmire was one of the few men who had the right (and appropriately funny) response to their partner telling them they wanted an abortion in an episode of the comedy TV series Brockmire. That’s not the only thing the show got right about abortion, though. It’s one of the few realistic and endearingly awkward depictions of what normally happens in an unplanned pregnancy when you haven’t been together too long.

These are the kind of portrayals of abortion we wish for on Indian television. Unfortunately, what we wake up to is the first episode of Sony Entertainment’s new show, Zindagi Ke Crossroads.

Zindagi Ke Crossroads is a show about the difficult choices we have to make in our life. Every episode, a live audience is presented with dilemmas and debate about their choice, and requested to send in their decisions were they in the same position. Now what if we told you that the fact that the show encourages nosy parkers to be even nosier isn’t even its biggest fault?

The first episode which aired on 6th June at 8:30pm has already sparked controversy. It revolves around a mother and her ‘moral dilemma’ of whether to abort an abnormal foetus, which the doctor says would grow up to be a disabled child.

The episode itself is no masterpiece, but an advertisement for the show had activists campaigning for women’s reproductive rights foaming at the mouth. A woman is shown holding her enlarged stomach, while the headline reads, “Mother asked to kill her own child.” Advocating Reproductive Choices (ARC), an association of over 170 organisations working in reproductive health said that the advertorial was “insensitive, misleading and misconstrued.”

Is demonising a woman making a conscious choice the only way the media knows how to talk about abortion? Things are hardly so cut and dry in real life. Raising a disabled child is not an easy decision. Neither is getting an abortion. The last thing a woman needs is to be guilt-tripped about what she does with her body, by hundreds of faceless readers and viewers.

The actual advert gets progressively worse, with her choice being described as, “saving motherhood or playing God.” The advert simplifies the difficult decision that the woman has to make into a seemingly obviously positive choice or an obviously negative one. As Laura Dorwart writes in The New York Times, “This brand of anti-abortion activism is ready and willing to use disabled populations as political pawns but is not yet equipped to imagine futures in which disabled people are autonomous individuals deserving of the full span of human rights. Abortion-rights rhetoric sometimes falls into this trap, too, resorting to familiar ableist scapegoating and fearmongering tactics like calling out the “horrors” of parenting a disabled child in a misguided attempt at defending reproductive rights.”

What if she decides to keep the child? Is it a given that she must also spend the rest of her life providing the adequate time or care such an individual would require?

Let’s leave behind this purposefully incendiary set of phrases used in the advert for a minute and look at the actual episode itself.

It generously uses garish emotional music when Ram Kapoor, or anyone in the show, so much as mentions abortion. All the while, the camera pans to distraught mothers in the audience wiping their tears.

And yes, he doesn’t forget to announce to the viewers at home to send in their answers. ‘Everyone, please send in your views about someone else’s pregnancy and not only will we encourage it, we will put it up on a big screen so that everyone can see your vicious judgements.’

When you deconstruct anti-abortion arguments, even just in the context of media depiction, two patterns of portrayal emerge very clearly. One discourse, and the most common one, is to equate abortion with murder. This is what many movies, like Kya Kehna, Zeher and even more recently, Raazi which was touted to be a feminist film, have done.

By using evocative words like ‘kill’ and ‘murder’, Zindagi Ke Crossroads ascribes personhood to the foetus, which becomes a dangerous tool in the anti-abortion discourse. Especially when it discounts the actual living personhood of the mother whose own life will be decided by the abortion in question. It makes viewers who ideally should be bystanders (you know, because it’s none of their business), think they have to step in to stop this ‘cold-blooded murder’ from happening.

The second way is to get the actual abortion over with, swift as you please, but it’s very important that the character who undergoes the abortion does so for socially unacceptable (but completely rational) reasons like her career, or just because she’s not ready to have a child yet. Afterwards, the character is either villainised or seen regretting her decision due to some bad karma from ‘refusing the gift of life,’ mostly in the form of some chauvinistic man leaving her after becoming privy to her ‘moral failings.’ Read movies like Aitraaz.

But let’s stick to the point here. Making what should otherwise be a rational, well-informed decision by a woman into a spectacle for hundreds of busybodies to exercise their skills in meddling is pretty darn ridiculous.

Most people consider it a big step forward that an Indian show can even talk about abortion. But treatment is everything when it comes to media. This kind of dramatisation is only going to reiterate the idea that abortion is everybody’s business except the woman’s.

So how do we want Indian reality television shows to portray women’s issues?

A few years ago, a reality TV show with a fairly unheard of premise in Indian television at least, came to Zee TV in the form of Connected Hum Tum. The show followed the lives of six women navigating work, love and life in Mumbai, completely unknown to each other but tethered together by the universality of The Female Experience™.

Here was a show that looked at the world purely from a woman’s perspective, complete with all the multi-dimensionality and nuances that are so painfully absent from mainstream Indian television shows.

Connected Hum Tum followed themes that we’d seen before like wedding anxiety and overbearing family members, but captured a whole new element that has always been missing in Indian TV, which is sadly a reflection of Indian society as a whole. Whether it was Pallavi’s refusal to compromise on her career to be the ‘woman of the house’ or Mahima’s attempts to move out of her sister’s shadow, these challenges were encountered and dealt with in a way that had never been seen on Indian TV, partially because the premise itself allowed for fluidity and freer expression.

It’s not just the premise that was unheard of, or even its ability to seamlessly put the ‘reality’ in reality television. It was the fact that these experiences gained a whole new meaning when they were vocalised by women. In Connected Hum Tum, life’s everyday challenges were experienced and narrated solely from a woman’s perspective, unadulterated and unbiased. Here, we were presented with beautiful, funny and flawed women who refused to be put in the boxes so often devised by reality shows to confine and define them.

Connected Hum Tum may not have tackled the topic of abortion, but imagine if it did. We would get to see a whole new world. One of uncertainty and guilt, but also the indomitable spirit of a woman who demands bodily autonomy.

We are not saying that abortion as a topic must be stayed away from, or that it must be limited to a certain perspective. Plenty of positive portrayals of abortion have been found in media and television. Although Indian media has left a lot to be desired in this realm, shows like The Fosters or even BoJack Horseman have achieved the perfect balance. Light-hearted but not nonchalant. Wry but not devoid of emotion.

To simply raise the question of abortion isn’t adequate if women are going to be talked over or spoken for like in the case of Zindagi Ke Crossroads.

Women’s groups in India are still fighting for the right to terminate a pregnancy even when it does fall under the Medical Termination of Pregnancy Act, 1971. Who can forget the 10-year-old in Chandigarh who was forced to give birth because the courts denied her the right to abortion? The MTP Act states that a pregnancy can be terminated after 20 weeks only if it fulfils one or more of a set of conditions which include failure of contraception, rape, or endangerment to the life of either the woman or child.

In a country where pro-choice debate is a distant possibility, for reality TV to exploit the matter for ratings and do a horrible job of it, does nothing at all to help women fighting for basic bodily autonomy.

Why Are Women Dying of Unsafe Abortions Even Though Abortions Are Legal in India?