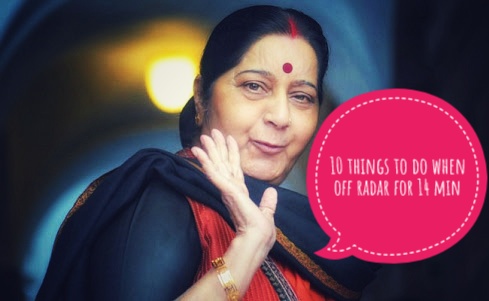 Last night, External Affairs Minister Sushma Swaraj’s plane went scarily incommunicado for 14 full minutes whilst carrying Swaraj to South Africa en route Mauritius for meetings on BRICS and IBSA groupings. When the plane entered Mauritian airspace, Mauritius was unable to establish contact with the plane, so they declared the INCERFA alarm, which in air speak is the first level of emergency that’s activated when it’s uncertain if an aircraft and its occupants are safe.

Thankfully, it was just a common technical glitch, particular to that oceanic area, and the aircraft, Swaraj and all other occupants are indeed safe. Swaraj even managed to pack in a quick meeting with the PM of Mauritius on her stop there. Which of course is making us think of all the things Swaraj could have done in those 14 minutes of uncertainty to pass the time, or even things she can do the next time her plane goes incommunicado. Not that we don’t want a girl to live in the moment. Not that we want her to work towards Inbox Zero or anything banal and time-managey like that.

3. Listen to this TEDTalk by Don McDonald on Learning to Love Machiavelli with 5 minutes to spare, or if perfect time management is really more her style, this 14-minute long TEDTalk on making stress your friend. Coz its either Machiavelli or stress, sakhi.

4. Read Jianan Qian’s essay on the differences between how stories are structured and celebrated in different East Asian cultures.This would give her good context to also read the international maritime agreements of different South East Asian countries, to avoid gaffes like India’s slightly clueless bid to join the Malacca straits patrol which would evidently impinge on Indonesia’s security and sovereignty. We gather Indonesia said politely that Malacca Straits Patrol not equal to Baywatch.

7. Make a fake Twitter account to troll Indians who lose their passports on the Zindagi Na Milegi Dobara tour in Spain. #YoloYeLo

8. Watch the first 14 minutes of this harrowing video posted by the Princess Latifah, the estranged daughter of the ruler of Dubai, whom India recently captured from a yacht at the behest of the ruler. Or, she could watch the beginning of this video by writer and activist Mona Eltahawy, accurately called “My Body Belongs to Me”.

9. Have a quick catch up with Smriti Irani without anyone judging. We all need our girlfriends, be your portfolio ever so high or low.

10. Now we wanted to be #yasqueen at the BRIC summit so this might have been a good time to practice her extracurriculars. Learn to sing a Russian song about space called “14 minutes to the launch”, or listen to this one guy sing 50 songs Bollywood songs set to one beat, or these 5 songs that will teach you Chinese greetings fast, or 7 of these “2 minute shower songs” from South Africa. We couldn’t find a 14 minute long Brazilian song so she could do this on loop.

What was Sushma Swaraj doing in the 14 minutes her plane went incommunicado last night? Singing this song, and other suggestions on our website.

Have a good flight, Sushmaji.