HomeNewsIf You Were Confused or Enraged By Smriti Irani ...
October 25, 2018 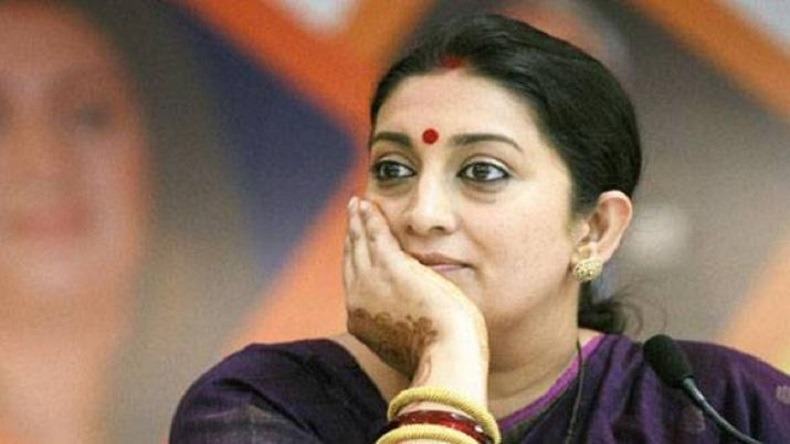 A few years ago I heard on the grapevine that an architect friend had been commissioned to build a house by a wealthy techie just outside Chennai. Among other things he wanted the house to have a high level of security and a panic room – a safe and well-stocked room to hole up in case of an emergency. Then there were other things he wanted but the panic room was high on his list and so was a room with a sort of drain. Not a bathroom, asked the architect friend. The client became blunt. No, he wanted a room for his wife for the days she had her period and the drain was so that she could wash herself while in there. This bizarre and cruel brief floated back to Bangalore and we were prompt in giving this room its right name: a moral panic room.

I thought of that room after hearing Union minister Smriti Irani’s puzzling remarks about Sabarimala yesterday. She was reported as having said, “I am nobody to speak on the Supreme Court verdict because I am a current serving Cabinet Minister. But just plain common sense. Would you take sanitary napkins steeped in menstrual blood and walk into a friend’s home? You will not. And do you think that it is respectful to do the same when you walk into the house of God? So that is the difference. I have a right to pray. I do not have the right to desecrate. That is my personal opinion.”

At this point I had no clue what Irani was talking about so didn’t feel ragey right then. Perhaps ‘taking’ sanitary napkins was a metaphor for wearing sanitary napkins? As in menstruation was a dirty thing to bring into the house of your god? Or was it potentially menstruating? In which case one could always say things like would you take a used condom to a friend’s house then why take your testicles to Sabarimala? This was all very strange but did remind me that a couple years ago Gyandev Ahuja, the BJP MLA from Ramgarh assembly constituency in Rajasthan’s Alwar district, had announced in a rare feat of purely imaginary data journalism that everyday 50,000 pieces of bones, 3,000 used condoms, 500 used abortion injections, 10,000 cigarette “pieces”, among other things, are found at JNU. JNU where, according to Ahuja, girls and boys dance naked during functions. JNU, Irani’s Not Happy Memories Place. The upper caste Hindu’s peculiar obsession with other people’s bodily fluids seems to have lent a sort of pornographic Manohar Kahani-esque vocabulary and imagery to the speech of the BJP leadership.

But then a little later yesterday Irani called the whole thing fake news, tweeted at Michael Safi, a Guardian journalist, promising a video to prove that it was fake news. She then tweeted a few more times promising to clarify but only further confusing the rest of us. One, she said that as a Hindu married to a Parsi she is not allowed to enter the Parsi temple but wouldn’t be approaching any court to contest it because of her respect. Two, menstruating women do not enter Parsi temples. Three, and my friends, if you understand what’s going on in this tweet, please let me know. “As far as those who jump the gun regarding women visiting friend’s place with a sanitary napkin dipped in menstrual blood — I am yet to find a person who ‘takes’ a blood soaked napkin to ‘offer’ to any one let alone a friend.”

Nobody said anything about anything blood-soaked until you did Smriti-ji! Even our captains of industry making millions on sanitary pads have always masked the source of their fortune in a mysterious blue liquid for girls who like to wear white pants when they have their period.

Irani is ordinarily a clear speaker so I can only conclude that her remarks and then her tweets are deliberately meant to create confusion while pretending to be Confucious.

Her last tweet on the subject should be your true clue that Irani has borrowed a leaf from the book of Kellyann Conway, the infamous ‘alternative facts’ member of the Trump administration who is truly gifted at sowing furrowed brows and dropped jaws across the American sub-continent. Irani tweeted, “But what fascinates me though does not surprise me is that as a woman I am not free to have my own point of view. As long as I conform to the ‘liberal’ point of view I’m acceptable. How Liberal is that ??”

Sister, I am not sure who you think are acceptable to. Your own side hates women in power and has been rejoicing at every mistake of yours because that is a little less time spent on the Great Leader’s gaffes. Liberals know they are supposed to like women in power but you know are just as bad as liking them. So a powerful right-wing woman is a perfect outlet for all our irritations.

And the fact that the promised video will never surface doesn’t matter since truth or purity or menstrual blood has nothing to do with Irani’s speech. Imagine Irani’s gall to talk about videos that will disprove fake news, given the scandal around her beloved JNU videos which forensic reports concluded had been doctored. The main suspect in that video drama was Shilpi Tewari, Irani’s aide. But Irani’s political (and non-political) career has been marked by gall and the blessed faith in our fragmented attention span. The diffused spreading of rage and confusion among a wide swathe of those involved in gaining entry for women in Sabarimala, feminists, anti-caste activists, menstruation-positivity folks is what she intended and that has been achieved.

Look at Irani’s other self-proclaimed picture from yesterday, one of domesticated femininity, patience, maternity, tradition-loving. Ready To Wait — Outside the Fire Temple. This portrait is fascinating. No woman who was ready to wait for anything could make it to the cabinet of any Indian government, forget this one.

I have no particular interest in establishing the true or faked squeamishness of Irani towards menstrual blood. But her continued ability to write her own winning dialogues and give herself meatier roles than the director or producer intended, now that’s a skill to be surveyed closely. And for that, the rest of us have to leave our own moral panic rooms.