The Youtube chipmunk trend is not new — it has persisted (thankfully) through a staggering amount of internet-time: 5 Gregorian calender years. If you hang out on Youtube you couldn’t exactly have missed these hugely popular videos. The undying interest in chipmunk videos is super easy to understand. Just watch one. It’s the ultimate cleanse after listening to sub-par item numbers. Bollywood watchers on youtube have embraced this global trend really warmly — there is a chipmunks audio or video version version of most recent songs. I don’t know much about where these chipmunks come from, but this early Chipmunks version of Single Ladies has provided much of the raw material for Bollywood recreations.

Basically, a chipmunk video takes a song, changes the singer’s pitch to pyscho-screeching (higher even than 90s Lata) and replaces Katrina Kaif (or anyone else) with a springy furry creature. I dare you to tell me how this formula could ever go wrong?

Unsurprisingly, the two that work best are Sheila Ki Jawani and Fevicol Se, ripe for parody as they are. The Munni Badnaam Hui chipmunks version didn’t work too well for me, partly because the original is actually a good standalone song unlike other hegemonic earworms.

Sheila Ki Jawani has 9,797,770 million hits and counting. In fact, if you begin to type the words Sheila into Youtube, you will be offered the chipmunks version as an option (sometimes ahead of the original video).

After subjecting different groups of friends to the Fevicol Se chipmunks version, I have objectively ascertained that it is the funniest. Like peeing in your pants funny. Don’t miss Kareena’s expression at the 42 second mark. 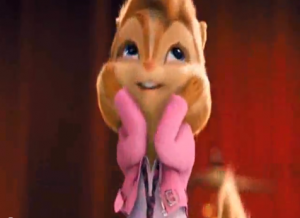 I know Farhan Akhtar was getting a lot of love for Bhaag Milkha Bhaag, but surely that movie could do with a testosterone detox? Either way, this absurdist version of Maston Ka Jhund mysteriously has multicolour zebras (maybe that creature isn’t one but I’m not savvy enough to tell). I think chipmunk videos might be entering a New Wave, but it be too early to tell and I don’t want to leave disappointed masses in my wake.

And lastly, I’ve found the perfect revenge against Yeh Jawaani Hai Deewani, for, er, existing + plaguing us with the most daft clothes I’ve seen in a Hindi movie. This version of Balam Pichkari, cuts right to the core: it spoofs Ranbir’s unbelievably amiss bandana. Say hello to Ranbir, folks. 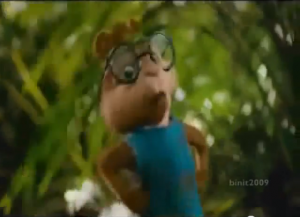 (This screenshop is a bit fuzzy, but I assure you this chipmunk is wearing a bandana.)