HomeVaanthiAccording to Every Surf Excel Ad, Only Boys are Al ...
June 4, 2016 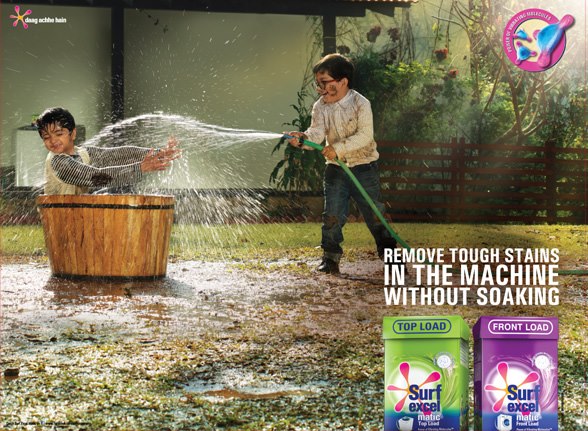 Being a teacher, I am very watchful of how I conduct a class where there are both girls and boys. I know the examples I give, the pronouns I use, the ones I call on to participate all making an impact on their psyche. One of my girls is an excellent sportsperson who has the potential to become a swimming/athletics/yoga or gym trainer. I once went to watch a cricket match where she was part of the team (one of only two girls on the entire team) and I heard the opponents being encouraged to hit the ball towards her when she was fielding, because ‘ladki hai’. Where is this coming from in this day and age?

For a few years now, the advertisements for Surf Excel have been getting under my skin. Specifically, the ones with children playing. These ads have only boys getting dirty while playing whereas girls (very few and far between) are getting dirty painting, being geeky, or cooking. Run a search on Youtube for ‘Surf Excel ads’ and you’ll see what I mean. In nearly all the ones I saw that involved children, the boys would get dirty saving chickens, searching for things, or even saving their little sisters and grandparents from some kind of trouble, but rarely painting or cooking.

Here are some of the ads that I found:

1. Girls can stand on the side and ask for help or giggle, because girls can’t climb walls or walk on a slide and dirty their bums. (Never mind that I did it, my sisters did it and all my friends did it- girls as well as boys.)

2. Here, a boy gives his football shoes to a friend who cannot afford them.

3. Let’s not even get into the number of things wrong with this one. But here is one geeky girl (the way girls are ‘supposed’ to be) who saves the boy. Here is the ad involving a girl getting dirty, but not on the playground.

4. How cute! A little boy becoming a puppy to cheer up his teacher grieving the loss of her pet.

5. A little boy becomes a scarecrow to save his grandmother’s chillies from being eaten up by crows.

6. A grandfather encourages his grandson to repair his bicycle and then offers to wash his t-shirt. Wow, something progressive, you might think, until you see them calling the mother who has some special hands (which only mothers have) with which she washes clothes. (Happy Mother’s Day everyone! Let’s hold those very hands and wish our mums whose only job is to wash clothes and dry chillies in the courtyard.)

7. Hey little brother, can you also fight those people who think that your little sister can’t defend herself?

8. Only boys wear shoes, need to learn to tie their shoe laces and get dirty in the process. What’s worse, it’s their cuffs, collars and pockets that get dirty (girls do not wear clothes that have cuffs, collars or pockets).

10. Boys playing on the playground. Boys bullying. Boys making peace. Not one single girl. Not even fielding.

11. This girl gets dirty, but only while doing art.

If there is a girl in a Surf Excel Ad, she is not getting dirty playing some rough game on the field. Have a look at this page and skim through the faces – how many boys? How many girls?

In stark contrast, a different world opened for me through the real kids in real-life advertisements for Surf Excel that have girls playing in the mud, in playgrounds and in fields. Getting dirty. Like girls in real life.

Girls on monkey bars, playing lagori, running in the park:

This one has a few girls playing too. (I don’t know if I should be miffed by this – the Indian girls are shown giving a great idea, but the Indian boy wants more freedom to play):

The six videos in the ‘Kids Today’ project have what look like real-life clips with real-life children. There are girls playing in the mud, parks, beaches, on monkey bars, running, jumping, swimming.

Surf’s advertisements are watched by all. Although the new campaign for Surf Excel roots for more children playing and I see some evolution in their ideas, I worry about the scripts they are writing for advertisements that are being shot in a studio setting, completely under the control of creative heads. Do they even realise that their ‘creations’ have sexist undertones? I tried to ask Surf Excel about their ads on Twitter, and have waited patiently for a reply. I never heard back from them.

Here’s what gets to me specifically in the Surf Excel ads: you can almost never see a girl having a “daag” that is achcha.