HomeBooksWhen Will Debates About Air Pollution in India Sto ...
December 31, 2016

Tokyo-based journalist Pallavi Aiyar’s new book, Choked: Everything You Were Afraid to Know about Pollution, is the story of a woman grappling with growing air pollution and its effects on the respiratory health of her children in New Delhi and Beijing. The book begins with a memory of being on a plane from Frankfurt to Delhi in 2003, and circling the capital for hours before landing because of its ‘spongy brown fug’ – the notorious dense smog that routinely envelopes Delhi, and was a source of national panic this year after the level of respirable pollutants (the concentration of particulate matter and gases, or PM, in the air) exceeded international safety limits by several degrees. 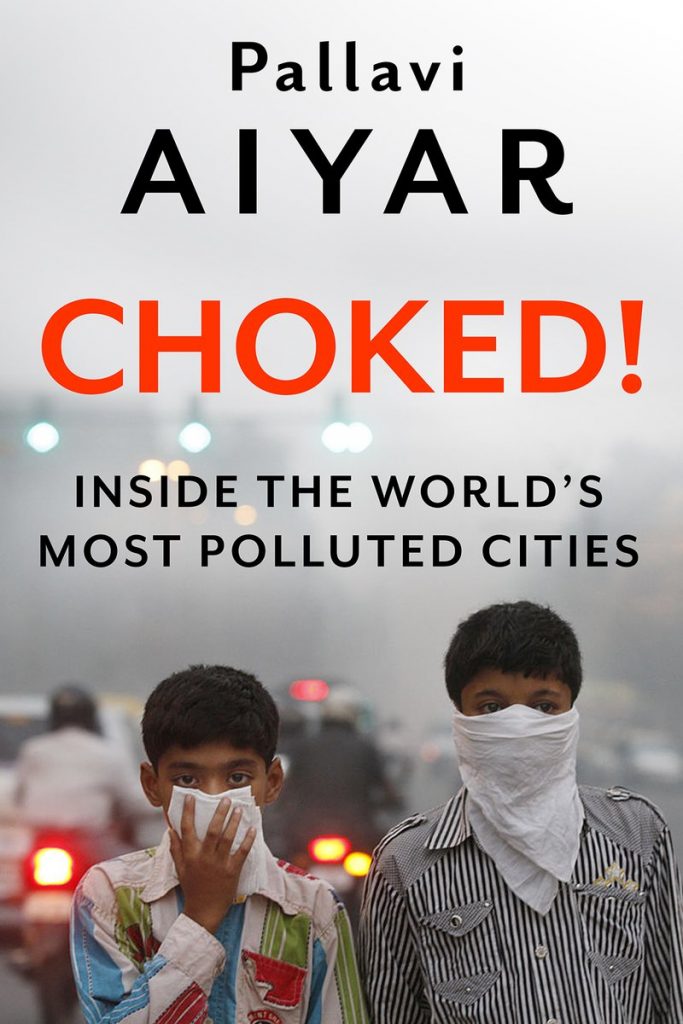 Aiyar remembers the sense of anxiety, bordering on hysteria, about environmental pollution during her time as a reporter in Beijing, and is understandably peeved and mystified by what she sees as “typical, blinkered, elite” apathy among Delhi’s middle classes. For instance, one Delhiite responded to a question about coping with the city smog with: “Yes, it’s terrible. You must always take your driver on New Year’s Eve.” She reminds us that a Chittaranjan National Cancer Institute study exposing pollution implications on Delhi children was actually suppressed by the Central Pollution Control Board. Her own experiences lead her to ask a range of public health experts, environmentalists, policy workers, friends, and family some vital questions: When will combatting pollution make it to the main agenda of our government? Why is there such a silence around the subject? And what can we do in the meantime?

The practical solutions she offers turn out to be mostly expensive ones, like Rs 8,000 laser eggs to monitor pollution levels, high-quality masks to filter out PM 2.5, air purifiers and other mitigation equipment. More significantly, her focus on New Delhi replicates a growing tendency in national discussions on air pollution to be skewed towards the capital. This could be partly because the statistics Aiyar reveals do point to a particularly hazardous situation for children in New Delhi. A 2015 HEAL foundation survey found that four out of 10 children in New Delhi experience lung problems, while a research fellow at the Public Health Foundation of India tells Aiyar firmly not to move her sons back to the city.

Beyond Delhi, though, there is a larger country waiting. There is a pressing need to expand our conversations on this subject beyond panicked hand-wringing about the capital: in 2014, the year that the WHO listed Delhi as the most polluted city in the world, with three times the annual PM 2.5 (the finer particles which bypass the nose filters and tend to enter directly into the lungs) concentration as Beijing, 13 other Indian cities also made it to the list, including Gwalior and Ludhiana. In fact, Ghaziabad, Allahabad, and Raipur have experienced far worse particulate matter levels than Delhi over the last decade.

Our attention on air pollution being limited to automobile emissions in Delhi also distracts us from other serious contributors to PM 2.5, like the burning of biomass in north India or the extensive consumption of fossil fuels. Cooking emissions from chulhas are a less discussed contributor that has caused particularly alarming levels of pollution in eastern India and led to multiple deaths. Recently, the director of the Chest Research Foundation in Pune was quoted as suggesting that we have far more reasons to be worried about sources of pollution inside our homes than outside, including incense sticks, mosquito repellent coils and snake tablets used around Diwali.

A report published in May 2016 by Greenpeace India diagnosed this same problem of skewed attention – that the focus on visible pollution contributors in cities like New Delhi was leading to an oversight of the fact that “rapid growth in coal based thermal power generation, largely out of sight of urban Indians, is one of the key drivers of the crisis”, and is the largest source of SO2 and NO2 emissions in India over the last five years. Yet another blind spot that the central government has evaded tackling is providing financially feasible alternatives to farmers so they can stop their annual paddy field crop fires across Punjab and Haryana, which also lead to immense levels of PM 2.5 emissions.

“Most readers of this book will probably not fall into the category of gobar chulha users,” Aiyar concludes in her book. “But from a public health policy perspective, indoor household pollution should be as much of a priority as tackling ambient air, indeed more so.” She foresees an imminent scenario in which the country’s rich deploys N95 masks to insulate themselves from dangerous levels of air pollution while the poor have no option but to struggle with it. She recommends that India learns from and adopt Chinese policies (which also come with their own host of caveats, as India has experienced industrialisation in a vastly different way) such as the installation of “high-tech pollution abation equipment” to regulate power plants.

While she recognises the gaping inequality between the rich and poor in tackling pollution, Aiyar doesn’t offer solutions at the policy level. Then again, her book is more of a personal take on coping with this modern problem. Explorations of possible policy initiatives, such as ensuring automobiles use cleaner fuel or imposing higher standards on emissions, are already abundant in the public domain. What Aiyar’s book makes clear is that while we can endlessly debate the minute (or non-existent) impact of initiatives like AAP’s odd-even traffic scheme in Delhi, we need to urgently develop a more panoramic perspective on air pollution in the country – one that moves beyond considering only what the middle class in Delhi feels on the subject.