Imagine you are sitting in your safe, cloistered docket at the communal workspace where you, along with other Airtel call centre employees, respond to pithy public tweets and messages from disgruntled Airtel customers. The lights are harsh white, your chair swivels but hurt your back when you stay seated for more than an hour. Your name is Shoaib, which is fine, and doesn’t tend to cause you any trouble (at work, at least).

Until one morning, you come back from tea break and sit down to respond to the next complainant, one Pooja Singh. She tells you that the local service engineer deployed to handle her DTH re-installation had misbehaved with her, and hung up on her, asking her not to call him again. You respond in the way you have been taught by your manager – with a cheery, personalised message that promises immediate action, and then a quick sign off with your name, Shoaib.

Imagine how you feel when three hours later, you see that Pooja has responded to your message with a public tweet, a tweet that serves as nothing but a slap in your Muslim face. “Dear Shoaib, as you’re a Muslim and I have no faith in your working ethics because Kuran may have a different version for customer service, thus requesting you to assign a Hindu representative for my request. Thanks”

Whom do you escalate this to, and where do you go from here, Shoaib? What is that feeling raging in your heart as you pass on this particular complaint to your friend, one Hindu Gaganjot, and what thoughts pass through your mind as you try to work and go about the rest of your day? 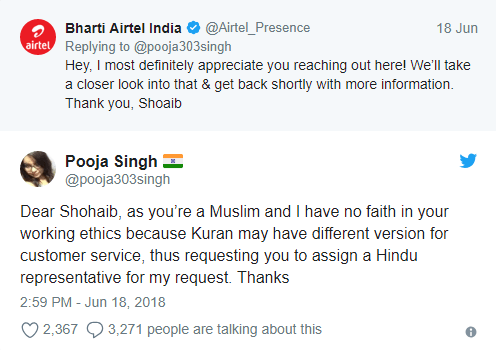 This is not an arbitrary exercise to build empathy. This scene, I imagine, is pretty much exactly what happened at a Bharti Airtel office, where poor customer service executive Shoaib works, on 18 June, 2018. We didn’t even change their names, really.

Airtel’s approach to this series of public complaints is very hard to make much sense of. Instead of asking Pooja to shut up as soon as she made her noxious request, Airtel allowed Gaganjot to cheerfully take over her case from Shoaib.

It was only after widespread social media outrage, including a tweet from former Jammu and Kashmir chief minister Omar Abdullah announcing his firm intention to cancel his Airtel DTH and broadband connection and port his mobile number to a different service provider, that Airtel decided to put out its own direct response.

The response brazenly flew in the face of the highly public action it took in shifting Shoaib’s case to Gaganjot. It stated that Airtel absolutely does not “differentiate between customers, employees, and partners on the basis of caste and religion.” It also stated that both Shoaib and Gaganjot are a part of the customer resolution team and that the first available service executive responds to ongoing service complaints in the interest of time.

What does this mean? That Shoaib was busy when Pooja responded, and Gaganjot just accidentally happened to be the right Hindu, at the right place and the right time to service her bigoted request? This is still hard to stomach, even if you believe Airtel’s version about the sequence of events, which, you know, we don’t. When you read Airtel’s statement, don’t you get flashbacks to every calm, clear-eyed guy who has looked steadily into your face and said that he never cheated on you while you wave incriminating screenshots and other evidence wildly in front of him?

Airtel’s response, coming as it does on the heels of Airtel very visibly appeasing the demands of a self-proclaimed bigot, is in pretty sharp contrast to Ola’s recent response to a case of bigotry on their platform. Not that Ola has a stellar record in responding to customer’s complaints or anything, given its recent horrible response to a terrible sexual assault case involving one of its drivers in Bengaluru on 1 June, 2018.

Ola’s response to the customer’s bigotry was far more palatable than their response to the sexual assault case. When verified Twitter user Abhishek Mishra, who is also a Vishwa Hindu Parishad and a Bajrang Dal member, posted proudly on social media that he had cancelled a ride on Ola because his driver was a Muslim, Ola immediately responded, saying that Ola, like the country, is a secular platform, and urged all drivers and partners to treat each other with respect at all times.

Ola’s response to Mishra’s bigotry against one of their own drivers was much more enthusiastic and happy-to-help than their response in the recent Ola cab-sexual assault case, probably because they felt less guilty and were more firmly convinced that in the case of Abhishek Mishra, they weren’t in the wrong, and were, in fact, technically the ‘victim’. In case of the sexual assault, on the other hand, Ola’s terse and reticent response was a clear indication of what we used to call “guilty conscience” in school.

Now, Pooja Singh of newfound Airtel infamy shows no such Ola-esque terseness or reticence in the face of her obvious wrongdoing. After being trolled on social media for her bigoted and frankly quite evil behaviour, Pooja has now audaciously decided that she isn’t sorry or wrong at all.

In fact, she has taken the widespread backlash against her filthy behaviour to serve as a thesis that her original contention was correct. Soon after the case blew apart on social media, and she had read what the public had to say about her unique worldview, she tweeted that all she had done was to ask for her representative to be changed from a Muslim to a Hindu, which she imagines is her “right”, and that the abuse she faced, as a result, proves that she was right “at very first place.”

I simply made a request to change representative from Muslim to Hindu as my experience in past was not good and that’s my right as well. After that, the kind of abuse I’m facing are beyond imagination and that in itself PROVES that I was right at very first place🙏 pic.twitter.com/lcCH2QpKo1

What do you do in the face of such breathtaking audacity and abject and willful lack of self-awareness? It feels impossible to say. Perhaps that’s why it feels more worthwhile to mull over the specifics of Airtel’s response in this case than Pooja’s. However long it took Airtel to come around, they at least sound like they know that it’s wrong to discriminate between Hindus and Muslims.

Plus, big service providers have the impetus to do better, if for nothing other than guarding against the loss of business from former Jammu and Kashmir chief ministers. “Management professional. Proud Indian/Proud Hindu/Nation First/Love our army” type individuals, on the other hand, as Pooja describes herself in her Twitter bio, have far more to gain from being toxic and proud of it. Personally, I would be more than happy to leave Pooja in whichever toxic corner of the internet she occupies (she now has 13.2K followers on Twitter), and spend time and energy on normal people who engage with reality.