HomeWatchlistCinemaHere’s a Quick Tutorial on the Creepy Affair ...
July 4, 2018 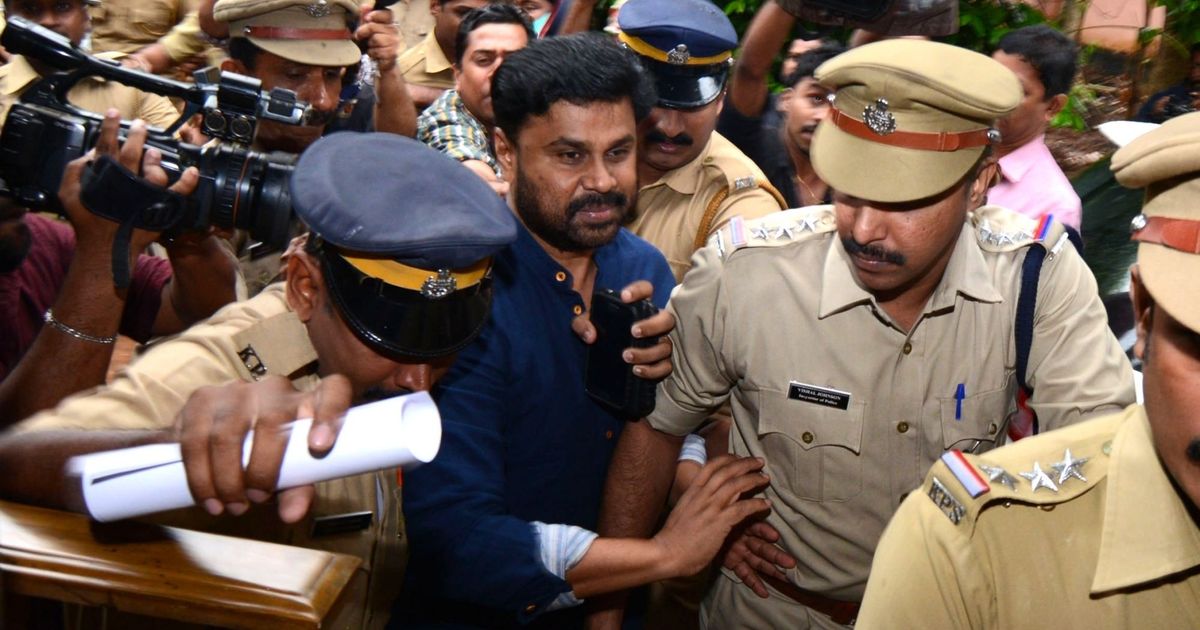 The Association of Malayalam Movie Artistes (AMMA), the largest actors’ body in Kerala, has been making headlines for the past two weeks after it decided to reinstate Malayalam superstar Dileep, who is being investigated on charges of conspiracy for allegedly masterminding the abduction and sexual assault of a Malayalam actress back in February 2017.
So what in God’s name is happening in His own country, and why is everyone talking about Dileep and AMMA?

Last February, a Malayalam actress was abducted and sexually assaulted in a car by six people, after which she was unceremoniously dumped near the home of director Lal. She filed a police complaint and in a few days, the suspects were arrested. We thought this would be the end of the case, but boy were we wrong.

The prime accused in the case was one Pulsar Suni (a nickname earned by, you guessed it, stealing bikes), with whom Malayalam superstar Dileep was discovered to have communicated through go-betweens both before and after the attack. Months of media speculation on Dileep’s involvement followed Suni’s arrest, during which the Association of Malayalam Movie Artistes (AMMA), in a truly bizarre instance of doublethink, extended their support to both the victim and Dileep, because they were both “children of AMMA.”

During the interim period before Dileep’s arrest, actors in the industry were inspired to voice the most ridiculous theories on what they thought had happened and to pass the blame around to anyone. So much so that even Dileep thought himself in a great position to publicly preach to the victim about how she should “keep better company”. 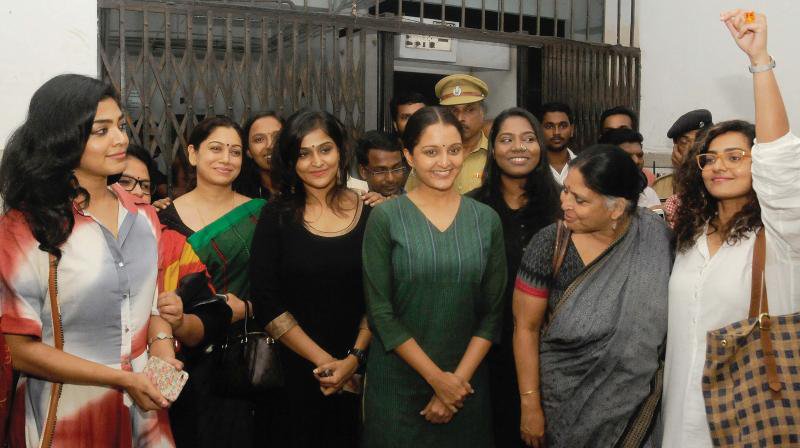 The only positive response to the incident came in the form of the creation of the Women in Cinema Collective. A group of women working in the industry, including Parvathy TK, Anjali Menon and Manju Warrier formed the Women in Cinema Collective (WCC), ostensibly to meet the needs of women in the business, but also as a clear indication of their lack of faith in AMMA’s abilities to deal with the case of the abduction and assault fairly. On May 18th, they submitted a petition to the Kerala Chief Minister, demanding a full and fair inquiry into this case.

Finally, Dileep was arrested on July 10th on charges of conspiracy, and the very next day, AMMA did what it should’ve done a long while earlier. AMMA held an emergency meeting at then-General Secretary Mammootty’s house and decided to expel Dileep from the body.

Dileep was booked under several sections of the IPC, including 376D (gang rape), 366 (kidnapping) and 120B (criminal conspiracy). He had allegedly masterminded this plot against his former co-star to “teach her a lesson”, because the victim was a friend of his ex-wife Manju Warrier, and had informed her about his philandering ways.

When in jail, Dileep was refused bail on several occasions, with the Kerala High Court of the impression that he was a powerful star who could destroy evidence or influence witnesses if released. In early October, he was released on conditional bail.

This was what happened last year, but why is everyone talking about it again now?

In a PR (and moral) disaster for AMMA, on 24th June, AMMA held its first general meeting with widely-loved superstar Mohanlal as its new President. Immediately after this meeting, AMMA announced its decision to reinstate Dileep, claiming that due procedures had not been followed for his expulsion.

The decision was met with outrage from most people who heard about it, because for one, the investigation, in this case, is still very much ongoing, and the facts that held when they expelled him from the body back in July 2017 still hold true. Did no one at the AMMA think this through?

The WCC took a strong stance on the issue by slamming the AMMA’s decision with a statement that bluntly questions them, featuring questions like “Don’t you feel there is an anomaly in taking back a rape accused to the association even before the investigation is over?” and “Isn’t this decision to reinstate Dileep into the association of which the survivor is still a part of, insulting her?”

Though some members of the WCC are part of the AMMA, they have never shied away from expressing their displeasure with the misogyny so intricately woven into the systems of power in the industry.

On 28th June, four members of the WCC – Rima Kallingal, Remya Nembeesan, filmmaker Geetu Mohandas and the assault survivor, all resigned from AMMA. The survivor’s statement made it clear that AMMA had really dropped the ball on this one.

Her statement read, “I am resigning not just because the accused actor has been taken back into AMMA. Even before, this actor has scuttled many of my acting opportunities. When I complained against this, AMMA had taken no action. Now, when such an unfortunate incident happened in my life, the organisation again tried to protect the accused. I resign from the organisation having understood that there is no purpose in being part of it.”

Since then, the WCC has sent a letter to the AMMA, seeking an explanation for their decision to reinstate Dileep. The WCC has shared this letter in a Facebook post, which asks the AMMA to make up its mind once and for all.

As of 28th June, Dileep himself has very magnanimously declared that he will not return to the bosom of AMMA until he has proven his innocence.

It’s interesting to note how polarized the reactions to these most recent events have been.

In Ernakulam, Thursday saw a group of All India Youth Federation activists burn an effigy of Malayalam superstar Mohanlal in front of the Kerala Film Chamber of Commerce and on Friday, the Youth Congress and KSU workers organised a protest march to Mohanlal’s home in Kochi.

In her own public show of rebellion, social activist Deepa Nisanth refused to share the stage with yesteryear actress Urmila Unni, who was instrumental in the decision to bring Dileep back into AMMA.

Yesterday, in yet another power move, 15 WCC members who were never part of the AMMA released a statement explaining why they did not want to join the organisation. The statement includes eight reasons, some of which are, “The way AMMA approached the issue of sexual assault of one of our colleagues, shows that their decisions cannot be trusted,” and “The silence that the organisation (AMMA) generally maintains towards the founding members of WCC, and the issues they raise, are precarious and irresponsible. There is no other option but to reject an organisation which is not capable of a healthy and ideological debate.”

Meanwhile, support has been pouring in for the WCC and their cause from several corners. A statement released by 146 women film practitioners from all over the country, was posted by film editor Jabeen Merchant on Facebook today. It said, “We admired and supported the Women in Cinema Collective that was formed by women film artistes in Kerala in the aftermath of the abduction and molestation of a colleague, a top star in the industry. We applaud the WCC members who have walked out of AMMA to protest the chairman’s invitation to reinstate the accused. We pledge our continued support to the Women in Cinema Collective who are blazing a trail to battle sexism in the film industry.”

The Kannada film industry has also condemned the decision to reinstate Dileep, with a statement signed by 50 actors, filmmakers, and writers of the Kannada Film Industry (KFI) and the Film Industry for Rights & Equality (FIRE). It declared that “We of KFI and FIRE ask that AMMA immediately revoke its decision to reinstate Mr Dileep until all charges are cleared and uphold the moral compasses that our film industries at their best possess.”

Finally breaking his silence on the AMMA side of things, Mohanlal reacted to the flood of accusations coming the organisation’s way yesterday, saying that branding the organisation as anti-women was “inhuman” and that, “even before knowing what the truth was, many whom we respect, came out opposing us.”

Branding AMMA as “anti-women” though, is the most obvious conclusion one can draw from this series of events. AMMA has not been known to respect women or the WCC. It even went out of its way to prove this through a mocking skit that took obvious potshots at the WCC, in a cultural programme called AMMA Mazhavillu that AMMA conducted on May 19th and May 20th, which was aired on the Malayalam television channel Mazhavil Manorama to incredibly high viewer ratings. The skit featured six Malayalam actresses who formed a “Whatsapp Sthree Shakthikaranam” (WSS) for women’s empowerment and was rightly perceived by many as a gross mockery of the WCC.

It’s hard to hope that the waves of criticism engulfing the AMMA can instantly change their unapologetically misogynistic outlook, when members at the top like actor-turned-politician MLA KB Ganesh Kumar, one of the organisation’s Vice Presidents (who was accused by his ex-wife Yamini of domestic violence), view the WCC actors who resigned as “habitual troublemakers who have a grudge against the association.” But the overwhelming support for the survivor and the WCC has certainly caused enough mayhem to pressure fans and people in the industry alike to question the patriarchal structure of their body and by extension, the Malayalam film industry.