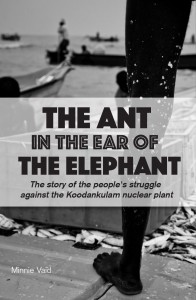 We’re happy to present an excerpt from Minnie Vaid’s book on the people behind the struggle against the Koodankulam nuclear plant in Tamil Nadu, set right by villages like Koodankulam and Idinthakarai. In this work of reportage, Vaid interviews not just the public faces of the movement like Uday Kumar of the People’s Movement Against Nuclear Energy (PMANE), but the not-so-ordinary women and men in Idinthakarai – the former who have been in the forefront of the protests, bringing their children with them – and surrounding areas who have sacrificed their time, earnings, and even their personal safety to protest against the setting up of the nuclear plant, which they see as something that will have dire consequences for years to come.

In the following excerpt, Vaid speaks to two brave women leaders who witnessed the administration’s ferocious crackdown on protesters in Idinthakarai in September 2012, when several thousand police descended on the village, firing at protesters, beating them, and damaging property.

For Xavier Amma, quick-witted and intelligent, with arguably the loudest voice and the widest smile in the village, what hurts most and lingers longest is the unwarranted shame of her 82-day incarceration in Trichy jail. She sees her arrest and jail term as a tactic by the government to isolate and make an example of her to dissuade other women from protesting. Xavier, like Mary Sundari, is a well-travelled leader who has participated in rallies in Delhi, Kolkata, Bangalore, Coimbatore and Madurai, among other places.

The most haunting and immediate recall of Xavier Amma, however, is a photograph of the September 10, 2012 showdown at Idinthakarai beach. The frame shows a wailing Xavier with dishevelled hair lying prostrate at the edge of the water, unable to get up, am flung upwards asking for help while several khaki-clad policemen circle the beach behind her.

Xavier recounts the exchange of hostilities in minute detail, her voice resonating with anger. “We were protesting near the plant on the seashore because we had heard that uranium was going to be filled in the plant which would be bad for the people. We did not try yo destroy either the plant or any police van or hurt anyone; we were only protesting. The collector arrived there and told us to leave because we were protesting near the plant. We said we would not unless they stopped filling the uranium. They then asked for Uday Kumar but we told them to speak to us since we were the ones protesting. The collector asked five women to speak and so five of us asked him why we were being stopped from protesting on our own seashore. Even as we spoke, stones were thrown at us and the riot began. Even children were not spared and were tear-gassed. The children started running away but we women did not budge. The gas entered our noses. I felt suffocated and fell into the water and could not get up. Later two policemen lifted me up and two policewomen took me away. I was arrested at 11am, held all day and taken to jail in Valliyur much later. No one in the village knew that I had been arrested. I was then presented in court and taken to Trichy jail. They filed six cases against me, saying I (and others) threw country bombs bottles and bottles and destroyed a police van. We were taken far away so we wouldn’t be here to protest. Since we had been so active in leading the protests, even travelling outside Idinthakarai to do so, they thought if they punished us it would scare the other women,” says Xavier analysing the events.

For Xavier, the most galling aspect of her encounter with the punitive arm of the state – jail and courts, policemen and lawyers – was being treated as a common criminal and paraded as one. “We (Sundari, Selvi and I) were stripped and searched when we entered the gates of Trichy jail. We had never seen women stripping women before and felt extremely insulted and hurt. Then they took us into the jail room and repeated the process. Whenever the police had to take us to court by bus, everybody would stare at us and the bus stop which was humiliating, we felt ashamed. We had not stolen anything, we had not killed anyone, so when they transported us like criminals we felt terrible! It used to be a long ride by the bus but they would not let us go to the toilet, they would go themselves but not allow us, saying they had to scan us first. They would let us use the toilet only once we reached court. In court they would say insulting things in front of so many people. My children too were not allowed to meet me in jail.”

All of this however served to harden her resolve and Xavier emerged from jail “with guts to fight, not be afraid”. We wnat our children to have happy, carefree lives, she says determinedly. We will protest till they stop the plant; it doesn’t matter whether it takes 10 days or 10 years.

Gesturing to the roof of the pandal she reveals that it has been built for the second time in as many years. “No matter how many times we have to rebuild it, we will continue our protest. We protest as if it our home; it has become our home,” she says with a note of finality.

Xavier’s daily schedule differs slightly from that of the other women. Along with a few select women, she also sleeps at the pandal, clocking an energetic roster of activities. She rattles them off quickly: “We sleep here at night, get up at 5am for the Mass in church, go home, do the daily chores and cook dinner for the children – they eat on their own – and by 10 am we come here to protest. At 4pm we listen to Uday Kumar’s speech and then go home, eat dinner and return to the pandal at 7 to sleep.”

Amal Raj clarifies the continuance of a practice that began in September 2012. “When the police entered ldinthakarai (post the September 10 clash on the seashore) and began arresting protestors, there were nearly 10,000 people sleeping here to protect themselves from arrest and to also protect Uday and Pushparyan. At that time there used to be power cuts for 17- 18 hours so people slept here to be safe. Today people are more confident so only a few people sleep around the church every day.”

Removing her round glasses and wiping the afternoon sweat off her forehead, Xavier comments wryly: “We were in a jail with bars all around us; our people were being harassed in a jail without bars.”

Her compatriot in jail, the stocky and equally articulate Sundari, belongs to Perumanal village and shifted to Idinthakarai only after her marriage. Today, by her own admission she is an ‘important person’ in the village, representing it while talking to the media, to industrialists, to collectors. She uses her innate sense of humour even while describing grim occasions. “The police threw tear gas at us on September 10 when five of us (women) were talking to the collector and other officials. Children started fleeing to protect themselves but I did not know where my two children were. Even as I was talking to the officials, they realised I was an important person and took me away. I spent 98 days in jail with 78 charges against me including allegations that I had made country bombs, talked derogatorily about the chief minister and prime minister, propagated violence, was a traitor to the nation, and a lot more.

“On the 80th day they charged me with kidnapping the Tirunelveli collector. When they took me to court and announced this charge of kidnapping I couldn’t control my laughter. I asked them: ‘How can a simple woman who makes beedis and sells pickles for a living kidnap a government official? I don’t have a huge gang! And if an official does not have protection in this nation then how can a common man have?’ They couldn’t answer my question. They told me I had committed a crime against the nation because I was protesting against something which the government had approved. I told them the government was initiated for the people and not the other way round. If they construct something in our home then they should ask if it is fine with us,” she ends sarcastically.

Nobody can tell me not to protest, says Sundari fiercely, her firebrand personality on full display. She has compiled a book about her experiences in jail and sent it off for publication. “They harried us in jail, telling me there are 100 cases against me; that I would not see my children for the next seven to 10 years. They wanted me to sign a document saying I am protesting at the instigation of Uday Kumar, not on my own behalf. I told them: ‘Uday Kumar may or may not be there tomorrow but I will protest for my children as they have to live on this land. And I will fight the cases filed against me’. The police would say things like ‘a woman’s job is to sleep with her and and have children, not go around protesting’,” says Sundari indignantly, adding that these are just a few of the incidents she has written about in her book.

Like Xavier, she was appalled and mortified at being strip-searched in jail; she was equally revolted at young female inmates being forced by the police to clear clogged septic tanks. She initiated protests against such treatment and also against the tasteless and inadequate food served at the jail, going on a three-day hunger strike to press her demands.

Threats and intimidation on a regular basis, says Sundari, have not stopped her from being among the first to volunteer for protest rallies; she sees herself as a role model for others in the village. “I get phone threats that my children’s lives will be spoiled. But I am also treated as if I am the head of the women of Idinthakarai. I questioned the judge in court so the CID people asked me who had taught me how to speak to a judge. I answered: ‘I am fighting against two governments, won’t I know this much?”‘ she laughs. 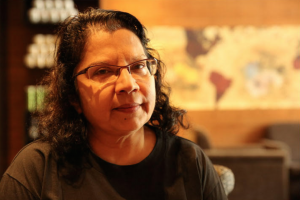 Minnie Vaid wears many hats: a former print and television journalist, a documentary filmmaker primarily interested in social issues in rural India, a part-time activist, and avid traveller, a social commentator. She is the author of A Doctor to Defend: The Binayak Sen Story and Iron Irom: Two Journeys.

(Featured image by Febin Prakash via Flickr/ CC BY 2.0)

CJI Sexual Harassment Case: Why Gogoi’s Accuser Rejected SC Panel and What It Stands For