HomeKrantiDo You Have The Life-Changing Magic of Sitting Pro ...
April 11, 2019 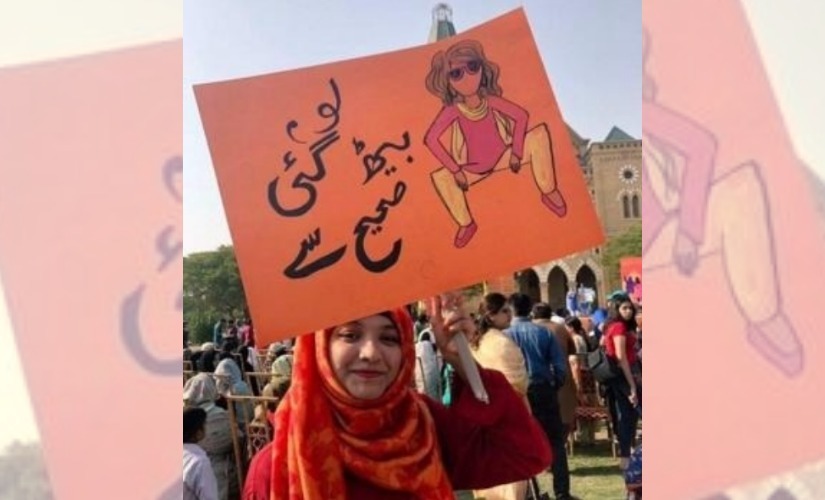 A thirty-something woman once told me that the single most shameful memory of her teens was what happened when her father walked into a room where she was sitting on the floor with her legs wide apart. “He just shouted at me to close my legs. I was alone. I was 13 years old. I was wearing pants. Somehow the fact that I was wearing pants made it worse, more shameful. Because it wasn’t like I was sitting weirdly and showing my legs or accidentally flashing my underwear. In that moment, my father made me strongly aware that I had a vagina. It was as if my father had walked in on me naked and holding a board saying: ready for sex.”

I’ve been thinking about her face as she told that story ever since the Lo Beth Gayi Teekh Se discussion took over Pakistani Twitter and Pakistani feminist circles.

In early March, a pair of young Karachi feminists, Rumisa Lakhani and Rashida Shabbir Hussain, created a poster with the Lo Beth Gayi Teekh Se (Look at me sitting so properly) slogan juxtaposed with a cartoon of a girl holding her thighs apart like a wrestler. This is the poster they carried to the Aurat March on Women’s Day in their city, a march in which over 7000 women participated. Lakhani and Hussain’s was not the only ‘edgy’ poster but it seems to have attracted the most attention.

In the weeks that followed the poster best represented the divisive elements in the big-tent Aurat march. Some feminists found it frivolous and other feminists found the first lot of feminists falling into the trap of patriarchy by gate-keeping what is a ‘real’ feminist issue. And as always when there is an internal discussion of what isn’t feminist enough, men are champing at the bit to offer their own Zomato reviews. When the renowned feminist poet Kishwar Naheed criticised the Lo Beth Gayi Teekh Se poster among others, men of all political stripes heard the whistle go off. A casual look at Pakistani twitter and television will give you everything from the old sport of men deciding what is real feminism. From men who think that ‘my body, my choice’ means it should be men’s choice to rape women to men who are now so regretfully withdrawing their sincere support of the Aurat March and feminism now that they have seen how ‘real’ issues have been sidelined.

Never mind that many of these armchair referees have never shown any real support for ‘real’ issues such as domestic violence to rape. One of my favourite tweets from the arbiters of Realness went thus. “If they are getting rape threats after a march that was supposed to educate men better, it means the message didn’t get across. May be if their messages concentrated on educating the masses than degrading all men regardless, they might’ve gotten better results.” But let’s come back to Lakhani and Hussain’s poster. Let us sit properly and discuss that one.

Several folks including the BBC have referred to the poster as the ‘womanspreading’ one. This is a full debate in itself. How much space should and can women take up in public? Men are notorious for taking up more than their share of space in public earning them the neologism ‘manspreading’ and even transport department campaigns against the behaviour. Studies have existed for decades to indicate that if a man and a woman are walking towards each other on a pavement, there are very few occasions when the man is the one who gets out of the way. In the last few years several non-scientific experiments have shown that when individual women experimented with deliberately not moving out of the way it ended in collision. British academic Charlotte Riley gave her experiment the best name – Patriarchy Chicken – after the game in which two drivers drive towards each other. One must swerve away or both could die. Obviously the one who doesn’t swerve is the winner. And the one who swerves is a chicken or cowardly. Obviously.

Riley writes about her experience, “Some men don’t walk straight into you, of course. Some men find their brains overridden by the unfamiliar experience of a woman refusing to give way… a man was so confused… that he stopped dead in front of me, holding eye contact, and flapped his mouth like a fish.”

While these discussions have turned on the axis of space, the reasons for the firestorm in Karachi were somewhat different. To sit ‘improperly’ is to be sexually provocative. To have parted legs does not prompt concern from parents and the mohalla any perceived vulnerability. They don’t say, “careful, beta, you may trip. You may trip on a penis.” The admonition does not come with softness or concern. As in the case of my friend, what you usually get if you space out and don’t ‘sit properly’ is a sharp rebuke or a long rant. If you have grown up with the ‘sit properly’ shout, as an adult it often needs a deliberate system override (or more shouting) for you to part your legs — to wax your thighs, to get a gynaec’s examination, to get a transvaginal ultrasound, to ride pillion safely, to have penetrative sex, to climb over a wall or to play sports.

Parting your legs is invested with the power of summoning immediate sex like a genie from a bottle, even if you are, as my friend was, a 13-year-old sitting alone in her room. On the other hand, sitting properly can also give you mythic powers. In 2014, a Canadian judge presiding over a sexual assault trial asked the victim, “why couldn’t you just keep your knees together?” (He had to leave the bench.) In 2018, an American judge asked a woman if she had tried to prevent assault by keeping her legs together. (He has been suspended.) Your assaulter may be one or many, may be bigger than you, may be armed, may threaten you or your family but girl, if you sit properly then you can’t be raped. Always remember.

It is right that feminists continue to argue about what is feminist, what isn’t and what isn’t feminist enough. It is right that women laugh at men who try to tell them that they supported feminism until this moment or that they support feminism but not this woman who treads lightly over heavy ground. All that is good and we will survive it. Let’s try to survive it while sitting however we want to.

Or you could watch this video of young CA Krishna of Thrissur, Kerala riding her horse to school on the last day of her Class 10 exams.

Watch it a few times and feel the power surging to your thighs and your stance widening. Lo Beth Gayi Teekh Se.

This video clip from my #whatsappwonderbox shows how a girl student is going to write her Class X final exam in Thrissur district, Kerala. This story made my Sunday morning brew of @arakucoffeein taste better! After all, ARAKU coffee is about #cupofchange #GirlPower @NanhiKali pic.twitter.com/45zOeFEnwV

Omerta is Like Rajkummar Rao’s British Accent in the Film: Sometimes Perfect, Many Slips